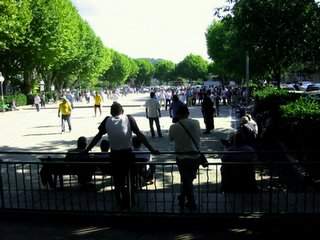 AND WHAT DO I THINK about the closing of our town movie theater, the Raven Film Center? It’s a very sad event, another step in the erosion of a town in real danger of dissolving into a theme park. Well, that’s put a bit extremely, I suppose: but a real disconnect is developing between two Healdsburgs, one of them a nice cozy town of 10,000 or so, where residents rub elbows at the library, the shopping centers, the cafés, the bakeries; the other a destination for tourists who stop in at tasting rooms, boutiques, and white-tablecloth restaurants.

Healdsburgers used to manage this negotiation by ceding the town square to tourists on the weekends, but the weekends have stretched; tourism is now close to a seven-day-a-week activity. There’s still a feeling of community on certain warm evenings, or at least there was last summer; but the town’s in danger of losing the very facilities that give a physical context for community.

There are two Ravens in town, not to be confused with the dining Raven-spinoffs, Ravenous and Ravenette. It’s an interesting history, I think: a local movie theater was built in remote antiquity, the 1930s or ’40s I think, called the Aven. (No, not a misspelling of “Avon,” as in Bard Of: it was named for a member of the founding family.)

In the 1970s, I think it was, the languishing Aven, then a victim of television, was bought by a film buff and community idealist who turned it around, chiefly by booking interesting films. It became so successful that when the big retail space formerly housing the J.C. Penney Company became available — Penney’s having lost its customers to sexier retail rivals in Santa Rosa, our local metropolis, and to the cheaper big-box stores that becan to emerge fifteen or twenty years ago — the lease was taken over by the Raven folks, who installed a four-theater complex, hoping thereby to be able to bring more niche-market films to town.

Then, a few years ago, two huge new multi-screen movie theaters opened nearby, the Rio in Santa Rosa and the Airport Cinema a few miles south of Healdsburg. The Raven lost much of its audiences to these competitors. The film-booking business is arcane and baroque and I won’t go into it here, not that I really understand it: suffice it to say a small local exhibitor of commercial entertainment film can’t seem to prevail in this competitive context.

WHAT’S TO BE DONE about this state of affairs? A couple of Sundays ago the town turned out to discuss the question. The largest of the four theaters seats 243, and it was overflowing. A good many very knowledgeable people filled us in on the history of the Raven’s decline, and then there was a brainstorming session.

I suppose you could say there were two big kinds of ideas, structural ideas and programming ideas. It’s clear the community wants a movie theater, but it’s not clear a conventional movie theater can survive — the current owners say it takes about 2,500 customers a week to keep the place open, and they’ve only been drawing 1500 or so at best. Twenty-five hundred customers: that’s a quarter of the town population, every week! Even if you could get the films, programming the place to draw niche audiences would be real sleight-of-hand: youngsters want noise, and go to the Airport; aging intellectuals want foreign movies, and watch DVDs; liberals want documentaries, and find them at the Rio (or on PBS); and the sizable latino population — some say forty percent of Healdsburg’s population — don’t seem to have the habit of going out to the movies.

The structuralist ideas tended to group around establishing some kind of non-profit organization to subsidize the Raven. I myself said I’d give a hundred bucks a year over the next ten years if it would help; if all of us in that room did that it would amount to $25,000 a year, surely enough to begin to find some solution. That idea didn’t fly far, but others suggested an organizing committee to look into some kind of community management of the facilities — assuming, apparently, that the place will soon be up for sale.

I HAVE ANOTHER IDEA, perhaps too complex to work, but complex enough I think to float. One of the things a community needs is a place to sit, to stroll, to talk. This has to be a place big enough for really lots of people on some occasions, but cluttered enough with visual and architectural features, and comfortable places to sit and stroll, that it doesn’t seem bleak when less heavily populated.

The Raven Film Center is on the edge of the Mitchell Shopping Plaza, a typical small-town strip mall with a big parking lot, a big retail store anchoring one end (currently a Long’s Drugs). The other spaces are leased to quite a variety of operations, from a specialty cheese shop (and a very good one at that) to a money-order office for the latino laborer; from a former photography shop now converting to an art-supply and framing shop to a resale merchant with everything from electronics to clothing; from a doughnut shop to a Mexican restaurant.

All these shops are drive-ups; there’s very little pedestrian traffic from the heart of town, only a block away — the parking lot effectively walls these shops off, announcing who’s really wanted here: people who drive in hastily, grab whatever it is they’re after, and take off again.

Needless to say, this isn’t the kind of “Third Place” — the alternative to Work and Home — a community needs. If I were king, I’d convert the south end of the mall to another village square, with a café-bar-restaurant with outdoor seating, and convert one of the Raven screening rooms to an indoor café constantly projecting films onto at least two walls — travelogues, documentaries, art films, old features. Sound off, of course; and if possible DVDs for sale on the premises.

Another of the four screening rooms should be used more fully for live performance, sincee it’s fitted out with a stage, overhead lighting, and a green room. There’s a fledgeling chamber-music society a few storefronts away: why shouldn’t it have access to this room?

I’d use the remaining theaters, seating 54 and 167 apiece, for quickly changing film repertory, Spanish and English, in a mix of programming frequently punctuated by special thematic series: food movies, or dance movies, or movies catering to other special-interest niche audiences willing, perhaps, to drive to Healdsburg from San Francisco or the East Bay, willing to have dinner in a local restaurant and stay in a local motel. We’re only taling about fifty people in that small theater!

What would this require? A person or group to buy up the current lease. A willingness on the part of the owners of the shopping center to re-think the use and purpose of their real estate. A commitment by the townspeople to support their own community.

Is any of this likely to happen? Frankly, I’m quite pessimistic about that. There are complexities here — economic, legal, insurance-related — that I know nothing about. Clearly the town council needs to spend a week or two traveling to places where these things happen better, either because there’s more vision there, or social conventions friendlier to the evolution of Places for People (not necessarily Profit).


I’ve put here a photo of the market-place/parking lot in Barjols, a very ordinary bluecollar town in the Var, in southern France. It’s a special day: there’s a boules competition going on; it’s drawn people from far and wide — from communities as much as a dozen miles away. No one’s getting rich from this, but the three or four bar-cafés at the edge of the place are doing good business. No reason part of the Mitchell Shopping Center couldn’t look like this.
Posted by Charles Shere at 1:48 PM

Tonight I went to hear Naomi Shihab Nye, one of my favorite authors/poets. I recently read her newest book for young adults, "Going, Going..." about a teenage girl who decides to do something to support small businesses and boycott the biggies. Nye talked about how easy it is for us Portlanders to frequent the small local businesses instead of the big franchises. Naturally I thought of Starbucks, and realized that the plus of Torrefazione closing is that I can really truly boycott the company. As for movie theaters, the locally owned ones are cheaper and show better films. I will have to keep that in mind.