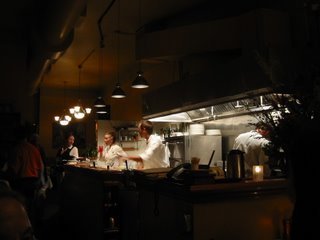 TODAY CHEZ PANISSE is thirty-five years old, and what do you see here but a photograph of... not Chez Panisse, but Jojo, a favorite restaurant of ours in Oakland.

At risk of political incorrectness, let's consider that most organisms, by the time they're 35, have begun to contemplate Continuation Of The Species. Jojo is just one of many "children" of Chez Panisse. Both Curt Clingman, who is facing the stove in this photo and so can't be seen, and Mary Jo Thoresen, who seems to be sighting across a glass of blood-orange juice, did time at Chez Panisse: he on the line upstairs, she as Lindsey's sous-pastry-chef.

They opened Jojo in 1999, right next to Bay Wolf, on Piedmont Avenue. It's a wonderfully inviting place, always comfortable, the food always dependably fresh and delicious. "Unpretentious" food, to use an adjective I loathe (why would food "pretend" to anything?): what I think of as Paris-bistro-cooking, things like mussels and paté and steak-frites. You should go there: you'll go back.

Any day now another Chez Panisse alum will open: Mary Canales's Ici, up in the Elmwood district, on College just north of Ashby in Berkeley. Mary's another pastry-kitchen alumna; she was co-pastry chef for many years after Lindsey's retirement, and I for one hated to see her leave Chez P. -- but it's an old story; many of the best inevitably feel the need to go on to their own things.

Last year someone interviewed Lindsey and asked, in the course of things, for a list of such people. We began it, but it seems to exhaust our resources; I mention Curt and Mary Jo and Mary only because they've been recent events -- we looked in on Ici last week, and ate at Jojo the week before. There are so many others that I'd best stop now -- but wait, I must mention Kees Elfring's Marius in Amsterdam! We'll be there in six weeks!

And now on down the road to Berkeley for a birthday feast...
Posted by Charles Shere at 10:19 AM