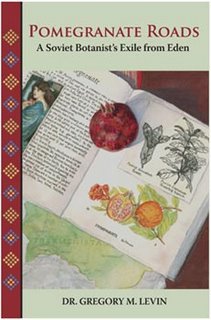 Those who were born during calm years do not remember their way. We are the children of fearsome years in Russia, we are unable to forget anything.
— Alexander Blok, quoted by G.M. Levin in Pomegranate Roads

HERE'S A SLEEPER of a book, part botany, part memoir, completely fascinating, written in a style so direct and effortless you want to keep turning the pages.

The author, Gregory Levin, was only five when the Germans besieged Leningrad; his father and three uncles were killed in the battle; he saw people die of starvation all around him. A born scientist, he cured his mother's scurvy, during that siege, with pine needles. Turned away from the university he should have attended because he was Jewish, he perservered, studying botany, doing graduate work in Turkmenistan, eventually concentrating on pomegranates.

That fruit resonates particularly with me for its medicinal properties, but you don't need health problems to appreciate them. They have fascinated mankind for thousands of years. Levin makes a good case for their having been Eve's fruit, Aphrodite's reward. Their teeming interior suggests fertility; their permanent stain suggests fidelity; their flavor and color suggest sensuality.

Levin wound up with a collection of over a thousand types of pomegranate, having searched them out in gorges, deserts, and mountain ridges throughout central Asia, traveling on broken-down trucks and jeeps, on horseback, by foot. He writes simply and almost laconically about these travels, with the dry pen of a scientist and a Chekhov, for he's Russian to the core, well-read, resigned to his time and place but determined to make the best of them.

The ambiguities and ironies of the Twentieth Century are only one constant subliminal thread through this book. Levin's life work was centered on a remote agricultural station centered on the Soviet-Iran border. When the Soviet Union broke up in 1989, and Turkmenistan became independent, priorities changed, and he emigrated to avoid seeing his work plowed under.

Turgenev and Jack London — and, perhaps, a certain detachment that comes with cultural isolation — seem to have taught him how to write. In a slim book that can be read in one or two sittings, he quotes literature, describes his childhood, portrays the vast central Asia, teaches botany, reveals Stalinist horrors — all effortlessly. You'll put the book down glad to have read it, to have met him, grateful to Barbara Baer for having found and published the book, eager to travel to central Asia, and thirsty for a glass of pomegranate juice. And, perhaps, a return to Mikhail Lermontov's great novel A Hero of Our Time.

Posted by Charles Shere at 5:09 PM