JUST A QUICK NOTE to recall Francis Ponge, the great French poet and homme des lettres. In the mail today a letter from an assistant to his daughter, asking if I have a letter from him. Well, yes, I do, somewhere, but who knows where.

In the late 1960s I became besotted with his limpid, crystalline, captivating writing through the medium of his Le savon, which appeared in Lane Dunlop's translation (Soap) in a small, elegant book published by Grossman/Cape Goliard. I found it in Robert Yamada's excellently stocked Co-op Bookstore on Shattuck Avenue in Berkeley, and before long I was on the store's board of directors, so besotted was I.

I bought every edition I could find of Ponge, and in 1970 wrote out a translation of his Douze petits écrits, working in the announce booth at KQED with my kit of colored inks and Brause penpoints (and a Rapidograph or two). A few years later my good friend (whom I see perhaps decennially) Rolando Castellon decided to publish a selection in his occasional periodical Cenizas, and then printed out a number of copies in facsimile. I thought I'd bind them all, by hand of course, in facsimiles of my original notebook, itself bound in cardboard and passepartout-tape. It's one of several, many, too many unfinished projects.

I wrote Ponge asking permission, of course, and received a generous and gracious reply, which furnished an end-paper to the projected edition. 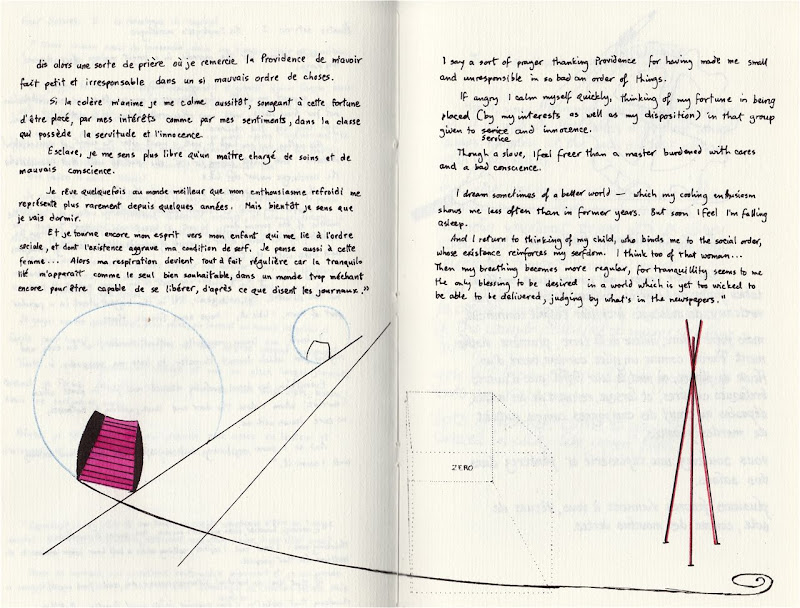 Here's a teaser (control-click on it for a bigger view), a two-page spread, ending the first of Ponge's Quatre satires: i: le monologue d'employé. Much of the original is too delicate to survive scanning, but you'll get the idea. The idea was to present the original French text and progressive translation attempts, correcting and revising as they go, with illustrations meant to set the mind loose.

Read Ponge; read about him. Google "ponge soap grossman" and read the first six or seven results. I put him squarely at the center of 20th-century literature; the literature of the present century would profit from knowing him, and his place.
Posted by Charles Shere at 11:10 PM