I LIKE TO USE two European websites for planning driving trips, playing them against one another: ViaMichelin and Mappy. Both function something like Google Maps, allowing you to plug in departure, goal, and a few waypoints along the way; they then tell you distance, duration of the trip, and approximate cost for fuel and tolls — very useful information.

Before leaving California I looked up something on ViaMichelin and found a little bonus, a short article describing a three-day gastronomic tour of Campania — just where we'd be. It involved a little more agricultural gastronomy than we'd really be up for, but it did suggest various accommodations, one of which was particularly intriguing. But how to find it?

When I phoned to reserve a room the proprietor told me she was in Pontecagno, the next town beyond Salerno. After spending the morning in the fabulous Villa Rufolo in Ravello, and stopping for lunch at a typical Italian country Sunday-Dinner destination* on the road north to Angri (no kidding), we drove on to Salerno, then, to see the Cathedral, which was of course closed, and to walk the streets of the old city, which made me think a little of Nice, a little — improbably — of Torino because of the arcades. (But then, I suppose many Italian cities have arcades, to shelter shoppers and loungers from rain and sun alike.)

Then I thought it would be a simple matter to find the via Montevetrano in Pontecagno, so we drove along the oceanfront road looking at each road leading off, finally gave up, drove inland, turned left at a sign to Pontecagno, came to a total block in the road where a bridge was being rebuilt, retraced our steps, continued toward the hills (after all Montevetrano must be in the mountains, I finally realized), found ourselves well south of Pontecagno (always thinking of Italy as running north and south when in fact it's closer to west and east); finally began hopelessly asking people almost at random for directions.

No one spoke English, needless to say, and a surprising number preferred not to speak even Italian, choosing dialect instead. Add to that the fact, for it was certainly a fact, that many of the men I spoke to (there were no women) clearly knew nothing of what I would call the local geography — their sense of Locality being much more restricted than mine. Well, maybe I should ask on the other side of that bridge, I said once, for example, pointing out the bridge we'd just taken across a small river. Came the reply: Oh well, the other side of the river, you know, who knows what those people know, who knows what they'll say, I never go there.

I drove up and down the main road between Salerno and Battipaglia probably four times, and finally came to a dead stop: all traffic was being stopped: a bicycle race was coming through. Ah, I thought, one of these traffic guardians will know. Sure enough one died: Ah, Monteveterano, you go back toward Salerno, just at the entrance to the autostrada follow the signs to Gruffone, it'll take you there.

And sure enough a few kilometers up toward the Gruffone, whatever that might be, a little inconspicuous sign jumped out at me: Azienda Agriturismo Montevterano, pointing up a narrow road. It lead us through fields and vineyards to an unmarked manor-house, I'd call it, where a number of cars were parked about. A young man was pushing his little boy on a swing on a lawn ringed by stately oaks. I told him what I was looking for, mentioning that I'd spoken to a woman on the phone — that would be my aunt, he said, and went into a small cottagelike building to fetch her.

La Vecchia Quercia turns out to be a pair of such manor-houses, each with two high-ceilinged stories containing I'd say at least four units. Ours was a huge room with a double bed and a single, and our own bath of course. It opens out onto a very pleasant covered porch set about with comfortable chairs. Next to that, a small grove of widely-spaced lemon trees, with tables and chairs; nearby, a covered outdoor kitchen with a pizza oven. 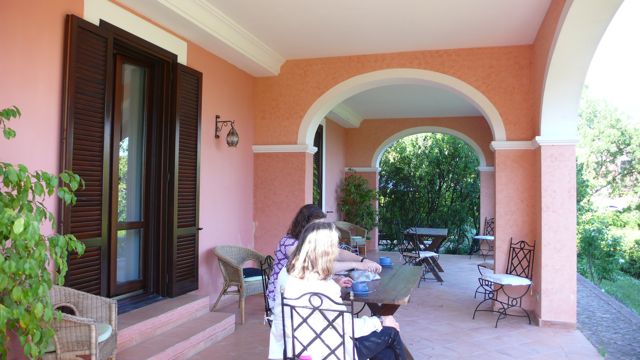 There was a pool in front of our porch, with an invisibly resident bullfrog happily brekkek-kekking away; and mulberry and loquat trees, and roses, and rosemary. We made a pot of tea and looked over our photos and talked about Erculaneo and Amalfi and Ravello and congratulated ourselves on our dolce vita; and at eight o'clock we went in to dinner, just us three, and dined very pleasantly, and conversed with Signora the proprieties about many things but particularly about the South of Italy, of which she is fiercely proud, and Napoli which she says is exuberant and a dramma, and Salerno which she said is turned inward and chiuso, and her sister an important winemaker who is teaching the locals how to make wine that does not turn to vinegar in two years; and then we looked at the fireflies, and walked back through the night to our room, and slept beautifully.

Notes on our meals during this trip can be found, as always, at Eating Every Day; photos can be seen at this webpage
Posted by Charles Shere at 8:30 AM