Campiella della Pazienza, Venice, May 30, 2011—
AMONG THE OTHER changes in this town, changes to be expected given human mortality and the evolution of the global economy, one has been gnawing at me particularly insidiously: The Absence of Cats.

On our first day here, a week ago yesterday, we walked across the Accademia bridge, south to north. On the way I told F____: Once down the other side, there's a nice surprise for you off to the right.

I was referring to the colony of feral cats we'd seen there ten years ago, when we spent a month here at the other end of the Cannaregio. On that visit we saw cats throughout Venice, but particularly there at the north end of the Accademmia bridge. Since then we've seen the similar colony in Rome, at the Argentina square, fairly recently: and of course idiot that I am about change and permanence I assumed they'd still be here in Venice.

They aren't. There wasn't a cat to be seen in the park in front of S. Vidal, where they'd hung out before. There haven't been any anywhere else, except for two adolescent cats we saw out for a stroll crossing a bridge in the Dorsoduro, I think, a week ago. They were so rare a sight that a native Venetian businessman bent down to pet one; and they were so comfortable with that that I assumed they were housecats out for an airing, not feral cats, not at all. (One was a nice ginger-marmalade, the other a black-and-white mackerel tabby.)

Since then, nada. Not a cat to be seen. Plenty of dogs, most of them carried about by nicely-dressed women, but not cats. We hear them at night, or one at least; at least I think it's a cat; the sound's unlike anything else.

The other day we stepped into an attractive shop next to Santa Maria dei Miracoli, a shop featuring women's clothes and accessories. The woman who owns the shop also makes costume jewelry and prints up fancy and fanciful greeting cards, many of which featured photos or drawings of cats. I mentioned that we'd missed seeing cats on our walks about town, and wondered what had happened. She explained:

A few years ago, apparently soon after our 2001 visit, an organization concerned about the health of the feral cats, having noted an increase in deaths due to feline leukemia, rounded up hundreds of cats to take care of them, and began sterilizing them and, apparently, those who escaped capture and/or leukemia as well. Since then, with the passing of time, the feral population has pretty well collapsed.

Now we have mice, the shop-owner said, quite seriously; Venice is overrun with mice. I'd rather have cats.

Me too, I said; I'd much rather have cats.

But there it is, she said; they didn't like seeing so many cats suffering, and they sterilized them.

I thought about this again this morning as I was reading, in another guidebook about Venice — we seem to read a lot of them lately — that the population of Venice is declining because it's so expensive; it's no place to raise children. Of course there are children living in this city; we see them at schools and in parks, and hear them in the streets; but there aren't a lot of them. Young couples beginning their families find life easier and considerably less expensive in Mestre, on the mainland.

But is the local human population threatened with the same fate that befell the local feral feline population? If it doesn't reproduce, and bring up a new generation, how can it remain viable; how can it outlast the life-expectancy of its own generation?

YESTERDAY, pursuing our gelato assignment, we made it a point to visit the Campo Santa Margherita again: it was on that vast expanse that we had some of the best gelato we've ever tasted, at the old Gelateria Causin. I particularly remember a rice ice cream I had in the summer of 1980, and again on another visit later.

(When were last there, in 2001, they didn't have riso on view the first day we dropped by. When I said I'd like some, Me too, the old man behind the counter said, Me too, but we don't make it any more; no one wants it. Since then my flavors of choice have been Fior di latte and Crema; L. smiles at my fondness for bland flavors.)

We'd rushed through the Campo a week ago, the first Sunday we were here this time, and hadn't seen Causin, but we hadn't looked too carefully, we'd been in a hurry to get somewhere else before closing time. We'd heard that there was a particularly good gelateria on the campo, though, called Il Doge, and having forgotten the name of Causin I thought they might be the same: but Il Doge was in quite the wrong part of the campo and, tellingly, its gelato was nowhere near the mark of what we'd remembered.

Then yesterday we were walking by and I decided to have a much more careful look. I'm sure it was at the north end of the campo, on the west side, close to that curious squared-off tower, I said, and went to have a look. There was one empty store, shuttered and padlocked, with two green awnings over its windows: the one on the right read CAFFE VENICE; the other had no lettering. At least not on first glimpse. 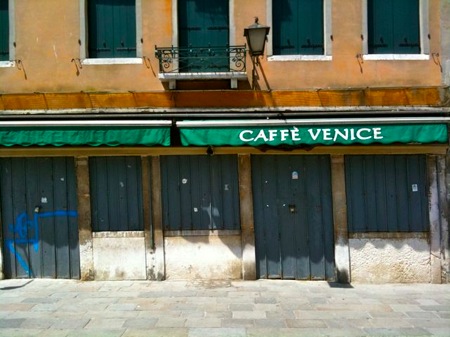 More careful scrutiny made me realize there were letters there, but they were backward:

and soon I realized a new owner had turned the awning inside-out to hide its former lettering. A closer look revealed the original wood sign over the door:
GELATERIA

I rushed back to the tabacchi where the girls were looking at old postcards. Look at these, L. said; they're so nice. An old man stood behind the counter; he looked a lot like the guy who'd told me they'd stopped making rice-flavored gelato, ten years ago. He was proud of his postcards, and pleased L. liked them. Guarda questo, he said, Look at this, and showed us a schoolboy's notebook with the date October 1940 on its first entry. The inside cover showed a faded monochrome photo of a man in fancy uniform reviewing troops: E Mussolini, the old man said, Guarda, Mussolini, che bel un uomo.

Yes, I said, but tell me, when did Causin go out of business? Oh, a long time ago, maybe ten years ago, the old man said. The years go by, here in Venice; everything changes. What is your year?

I was a little taken aback, first by Mussolini, then by his question, and didn't quite understand. Seventyfive, I responded. He smiled dubiously: seventyfive, no, I don't think so. I'm fortytwo.

Oh, I said, what year was I born: thirtyfive. That's more like it, he said. He was sixtyseven, seven years my junior, and I've been calling him an old man.

Later on I asked a waiter standing outside his restaurant about Causin and the Café Venezia. He didn't remember any gelateria there, but said the Café had closed, oh, two years ago at least. Really, I said; and the place stands there empty, on the Campo Santa Margherita, all this time. Oh yes, he said; there isn't any business. Wouldn't you like to have lunch here? No? A drink, then? Such a nice day, why not sit down and have something?

We'd eaten lunch; it was too early for an apéritif. I shook my head and thanked him. He completely lost interest in us and turned away. At the other end of the campo a couple of kids were riding a bicycle and a scooter; earlier, two very little girls, watched by their young mothers, had been playing with a ball and a spinning-top. All is not lost here in Venice, but the last few years have been hard. 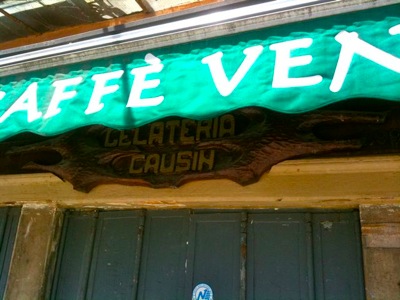 • Online photos from Venice this month
Posted by Charles Shere at 10:12 AM