Einstein at the Berlioz

My old friend John Rockwell said it well, years ago:

“Einstein was like nothing I had ever encountered. For me, its very elusiveness radiated richly, like some dark star whose effects we can only feel. The synergy of words and music seemed ideal. … Einstein on the Beach, perhaps, like Einstein himself, transcended time. It's not (just) an artifact of its era, it's timeless ... Einstein must be seen and re-seen, encountered and savored ... an experience to cherish for a lifetime."

I quote that from the Nonesuch Records website (Google nonesuch einstein montpellier, I can't readily embed links with Blogger on iPhone).

To John's remarks I merely add: the opera is as mesmerizing and transporting now. We saw it last nearly thirty years ago, at BAM; we saw it last night from similarly placed seats — center, nearly as high as possible.

Montpellier's Berlioz Theater is incredibly high, a postmodern version of a traditional European jewel-box theater. Perhaps our seats underscored this opera's unique effect: it was as if we were witnessing the coherent but often enigmatic proceedings of a distant and foreign society, at the same time re-acquainting ourselves with knowledge we'd somehow internalized, perhaps years ago, of the inexplicable yet reassuring meaning of it all.

There were little technical glitches along the way — opening curtain was delayed an hour. But the performances were superb: singing, instrumental, dance, acting, lighting, stagework.

The audience mostly remained seated the entire nonstop four and a half hours, though they were encouraged to come and go at will. They gave the piece a fine ovation, and they were right to do so. I think even Berlioz would have been struck with the beauty, the artistic truth, and the significance of the event. 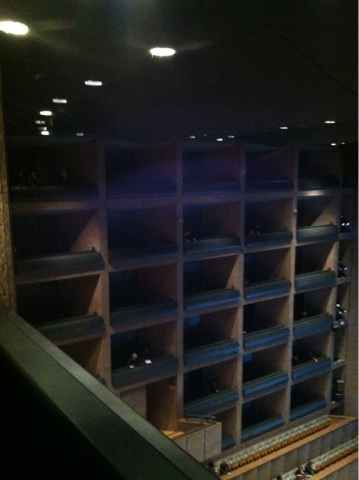 Posted by Charles Shere at 1:51 AM