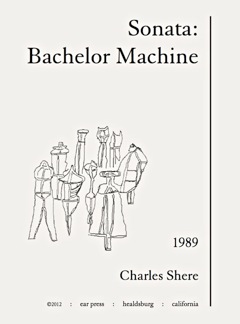 IF YOU'VE VISITED this blog before you're no doubt aware of my long-running infatuation with La Mariée mise à nu par ces célibataires, même, the chef-d'oeuvre Marcel Duchamp abandoned in 1923, which has since attained the status of legend within the annals of Modernism. He had worked on it for ten or twelve years; I worked on it longer, ultimately to an even greater degree of futility.

One of the by-products of this infatuation, in the category of musical composition, was my first piano sonata, composed mostly in 1983 and 1984 while working on the opera I was slowly finishing up. A long ballet dominates the middle of the second act, the center of the opera: it was conceived as representing the mechanical workings of the Bride and her Bachelors, with solo material given, respectively, to violin and piano.

This sonata is the piano material, lacking all other music (solo and choral singing and orchestral accompaniment) but fleshed out slightly with additional notes. (The violin material went into a concerto, about which I recently posted here.)

There are two intentions in this sonata: to make an extended, somewhat virtuosic piece of music for solo piano, and to retain the arbitrary, quirky, stiff characteristic of Duchamp's conception. The part of the bachelor apparatus that is most present is the "chariot" or "glider," a contraption that comes and goes in a reciprocating movement, sounding its "litanies" ("slow life: everyday junk: onanism: buffer of life") and actuating an elaborate train of machinery which ultimately fails to strip bare the bride.

The three movements are called Cadre, Desires and Frustrations, and Action and Inaction. I wouldn't mind finding an English word for the title of the first movement, but nothing quite does what the French cadre does: framework, context, grouping...

The music of the Sonata can also make a fairly substantial Piano Concerto, a Big Concerto to complement the Small Concerto for Piano and Orchestra, but it hasn't yet been notated, except as part of the Duchamp opera. Perhaps one day.

Sonata: Bachelor Machine was first played by Eliane Lust, July 25, 1990, in San Francisco, on a wonderful program also including Debussy's Hommage à Rameau, Bartók's Sonata, 1926, and Schumann's Davidsbündlertänze. What a night! You can watch the incomparable Eliane play one movement of the sonata online.

I've finally prepared what I think is a fairly decent edition of the score of Sonata: Bachelor Machine, available at Lulu.com: click here to order a copy.

Also online: you can hear and purchase an mp3 of the sonata, as synthesized from the score. (At that same site, you can now buy tracks of various pieces of chamber music; more about them in the future, perhaps…)

Posted by Charles Shere at 3:18 PM

Labels: Duchamp, How I wrote certain of my music, music