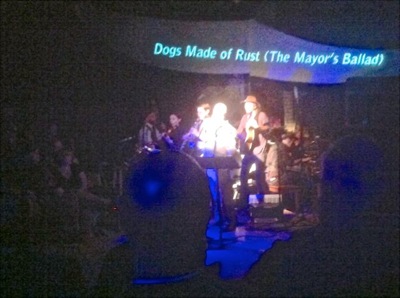 IT'S NOT MUCH of a photo: I apologize to the reader for having nothing better, and to the Imaginists for sneaking the photo during tonight's performance. But I want to draw your attention to some arresting cabaret theater going on here in Santa Rosa, our provincial capital twenty minutes to the south of Eastside Road.

We've known and followed them for some time now, admiring their work, which stands among experimental, agitprop, local, improv, professional-and-student productions, sometimes drifting to the established repertory, sometimes apparently making things up as they go along during rehearsals.

And did I mention they are not paid? Well, they mentioned it a few times tonight. The Imaginists are getting national and statewide attention, but are not as well known or supported in their own community as they should be — a common problem, of course. So in this production they're addressing the situation quite confrontationally.

The Ratcatcher is cabaret theater centered on the story of the Pied Piper of Hamelin, who was hired by the town council to rid the town of rats, but was then stiffed. In revenge, he piped the town's children away as he had done their rats, and neither they nor he was ever seen again. The program credits, as sources, Wikipedia; Marina Tsvetaeva's play The Ratcatcher; workups of the tale by Robert Browning and by the Brothers Grimm; and Lewis Hyde's The Gift.

I'm not quite sure how that last item fits in, but clearly the story stings to a number of current issues: support for the arts; political economic agendas; exploitation. As the Imaginists generally do, they hinted at other issues. I was fascinated to discover, watching this show, that the Pied Piper story is an interesting commentary on the Orpheus myth: the power of music; the musician leading his audience; the musician understood by innocence but ignored and even feared by rational listeners.

The Ratcatcher weaves the town-council-versus-Piper story together with a subplot involving the mayor's daughter, who like all the town's children seems to have left town for more enticing, more fulfilling communities. Hamelin, after all, is interested only in promoting itself for the tourist dollar: it's a typical wine-and-cheese weekend destination. (Are you listening, Healdsburg?) The show also weaves together the town-council plot as acted by three professionals — Amy Pinto, Brent Livesay, Eliot Fintushel — with four student (or perhaps more accurately emerging) actors. Their scenes alternate, resulting in problems of scale, pacing, and clarity.

But for the most part the show is professional, powerful, and engaging. Pinto, Livesay and Fintushel are as good as I've ever seen them, which is saying a lot; and while the three young actors (whom I can't credit, as the program doesn't specify roles) seemed to relate more to one another than to their audience, their story emerged as ultimately both touching and persuasive. And Quenby Dolgushkin, in the final scene, found a high emotional pitch just under the top, just this side of hysteria; it reminded me of formal tragic acting I've seen on classical stages.

The instrumental music was provided by The Crux Ensemble, six musicians who among them play eighteen or twenty instruments, now improvising spooky sound effects, now merging in tight ensemble on written-out charts. As the spoken text was developed by the actors, the music is all the work of these performers.

Only four performances are left: December 13-16. Efforts are being made to record the sound track; I hope they succeed. The songs are marvelous, as just their titles suggest: Boskers; Onward Soldiers; The Cheese Song; Dogs Made of Rust — how can you go wrong with such titles? And they are sung (and accompanied) with intensity and a strange beauty. I'm glad I saw this show; I hope, somehow, it evolves to the printed page, and enters the repertory. (It would make a marvelous show for student productions.)
Posted by Charles Shere at 8:35 PM