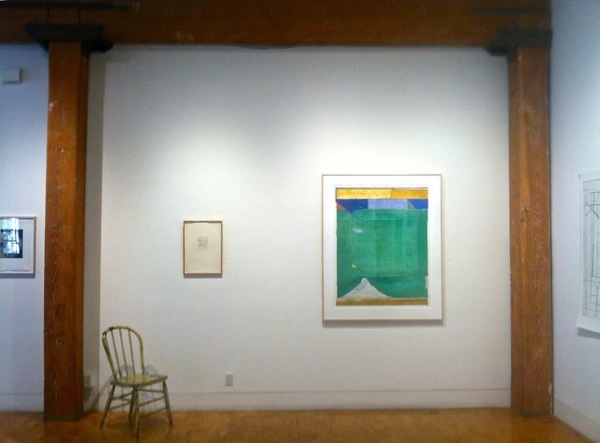 Eastside Road, January 1, 2013—
THIS ISN'T MUCH of a photo, I know; I snapped it quickly with my iPhone; I just want to give you an idea of the unique combination of intelligence, repose, and beauty to be seen for the next two weeks in the handsome Crown Point Press gallery in San Francisco. The Press is celebrating its fiftieth anniversary this year, and this is by way of the opening celebratory exhibition, and who more logical to feature than Richard Diebenkorn.

The first time I saw a Diebenkorn print it was one of the series of drypoint etchings he made at Crown Point when the studio was in Richmond. I'd driven out there to pick up one of the prints to deliver to KPFA-fm, where I was then volunteering, so this must have been before summer 1964 when I went on staff. The etching was to be photographed somewhere for use as the cover of the program guide, which in those days was a small-format biweekly. I remember the print was a tabletop still life with a pair of scissors.

These were, I think, among his first prints: until then he'd been almost exclusively a painter and draftsman, alternating between representational imagery and the marvelous spatial abstract "landscapes" of the Berkeley and Albuquerque series. Later still, of course, he famously left the Bay Area for Santa Monica, where he settled in Ocean Park and painted the magnificent geometrical abstracts that went by that name.

In this photo you see three objects (excluding the partially captured objects left and right): a chair Diebenkorn left behind in the Oakland studio he used for a few years, which Crown Point subsequently occupied before moving to its present San Francisco location; a small framed self-portrait; and "Green," a magnificent etching from 1986. The paper hanging on the right-hand side of the photo, only partially seen, is a working drawing for "Green." I find this installation truly arresting, yet serene. The empty chair — I'm sorry the idiotic Republican convention last summer has spoiled that phrase for the time being — the empty chair positioned under the self-portrait brings the artist himself into the gallery, in a ghostly way, sitting (rare for him: I always think of him as standing, with the slightly stoop-shouldered powerful stance of a tall, well-built man), contemplating the working drawing, then the finished print.

In March it will have been twenty years since Diebenkorn's death, just short of seventy-one, of complications from emphysema, according to the Wikipedia entry. He had recently moved from Ocean Park back to the Bay Area, to Healdsburg in fact, a few miles from our Eastside Road, and his painting was as usual undergoing a considerable change in mood and appearance with the move: had he lived, we'd have a Healdsburg series perhaps, probably with a considerably different palette and content from the Ocean Park abstractions.

Three disturbing, powerful, rather enigmatic aquatints from 1992 may suggest disturbances interrupting the tranquil though extraordinarily thoughtful work of Diebenkorn's last decade. Called (by the artist) "Flotsam," "The Barbarian," and "The Barbarian's Garden — Threatened," they can hardly avoid being seen as representational and symbolic. They hang close together at Crown Point, allowing a close scrutiny which encourages contemplation of the changing forms and images, alterations sometimes subtle, sometimes less so, as the artist discovers, encourages, or suppresses edges and contours, re-configuring the light-dark balances, once even turning the rectangle the other way up. (You can see reproductions of these prints, and others in this show, here.)

Throughout the exhibition you're reminded of the essentially performative nature of Diebenkorn's work. This comes through quite literally as he alters his plates between trial proofs, or draws on them, or glues strips of tape or cut-out scraps of paper to experiment with various shapes. But it also pervades the viewer's engagement with the artist's process: a real colloquy develops, in which the time required by each stage of his work, both for its creation and for the viewer's perception of the rich content which is sometimes slow to reveal itself, the time itself becomes a fourth dimension of the work (the third being implied in all his work, which can hardly avoid being seen as landscape).

There's too much to be said about Diebenkorn and his work; this contemplation has often completely overcome me. Toward the end of his life I visited him on an assignment from a magazine that had suggested I interview him on the occasion of his move north. He was clearly fatigued; I now suspect he knew he didn't have that long to live. We spent a delightful hour talking about things, but neither of us wanted to commit to the project, each of us for a different reason. He was gracious and appreciative and very thoughtful: he was always, I think, a profoundly thoughtful man.

(Years earlier, when he had a retrospective at the old San Francisco Museum of Art on Van Ness Avenue, I interviewed him much more superficially. I mentioned his use of diagonals in his abstracts, and pointed to the crossed legs of one of his Seated Woman paintings, and he shrugged, and pointed out that one always sees the same things, whatever one looked at.)

I noticed a quote from Jasper Johns at the present SFMOMA yesterday:

Sometimes I see it and then paint it. Other times I paint it and then see it. Both are impure situations, and I prefer neither.

I don't think Diebenkorn would agree with this: or, rather, I don't think Diebenkorn would find any impurity in the situation: or, rather, I don't think "situation" is a word you could bring to Diebenkorn's participation in the activity Johns is discussing. "Situation" implies stasis, and Diebenkorn's work is constantly undergoing development, or, rather, since "development" implies improvement of some kind, his work is constantly in motion, the slow, meaning-accreting motion of contemplation and adjustment, the minute and informed change we must all accept and embrace if we are to continue to live.

There's also a lot to be said about Crown Point, and about its director, Kathan Brown, who has just published a memoir, Know That You Are Lucky, that I look forward to reading soon. In the meantime, this wonderful Diebenkorn exhibition will be up another couple of weeks, and I urge you to see it if you can.