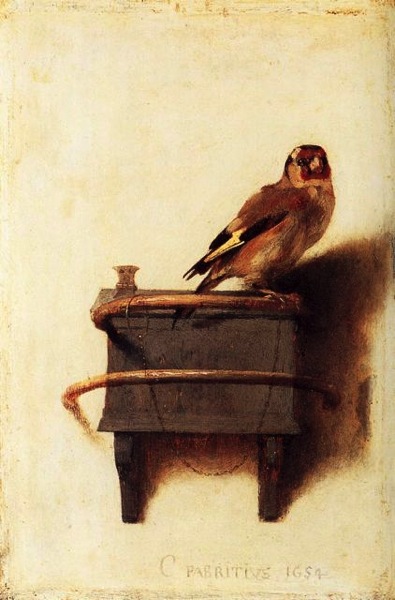 Eastside Road, May 30, 2013—
I MADE A COMMENT over on Facebook the other day that I've been thinking about on and off since:

I think culture is primarily local — think Vienna in Mozart's day, or London in Johnson's (not to say Shakespeare's!), and Paris at various times. Some of the local cultures develop intense moments; others no doubt simply simmer along comfortably and sustainably. But entertainment as we know it today is global corporatism, like agriculture, and war, and any number of other disasters. Oddly, the Internet supports this global tendency to a degree, but it also facilitates the thing I'm calling local; there are "localities" uniting me [with my readers and] commentators though we live thousands of miles apart.

Yesterday we drove down to San Francisco to see two favorite paintings, here from the Mauritshuis in The Hague. Two of the finest paintings I know, painted within twenty years and ten or twelve years of one another, by painters who must have known one another. To Vienna and London and Paris, add Delft, where Carel Fabritius (1622-1654) and Johannes Vermeer (1632-1675) both lived toward the middle of the seventeenth century.

The Goldfinch (1654) seems to be one of the last of Fabritius's paintings, of which few have come down to us. Fabritius was killed, only 32 years old, in the great gunpowder explosion of October 12, 1654, which destroyed a quarter of the city of Delft, including his studio and paintings. Thirty-two years old! He was, you might say, the Schubert of painting. He had studied at Rembrandt's studio in Amsterdam before his unlucky decision to move to Delft. He was certainly taking painting into a new direction. I don't know why he painted this pet goldfinch; even whether it is in fact a finished painting as we see it, or a fragment of a larger work (it's about the size of a sheet of typing paper). I only know it is enigmatic, neutral in mood (to me), beautifully composed, and — seen in the flesh, not through reproduction — amazing for its application of paint to capture light, solidity, texture. The white highlights on the brass rails; the striking yellow-god on the wing, the delicate tracery of the chain… and the marvelous texture of the plaster wall, a triumph of abstraction… 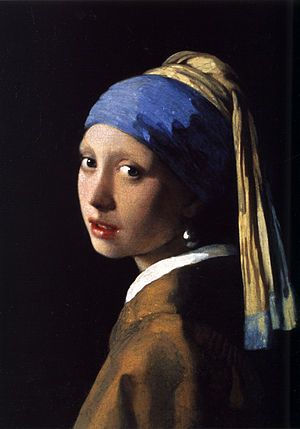 Hardly anything need be said about The Girl with the Pearl Earring (ca. 1665). Hardly anything can be said with any certainty. It is most likely not a portrait, but what was called in its day, by the Dutch, a tronie, an unidentified model, usually costumed, painted half-length or, more often, as here, closer to, concentrating on the face and its expression.

It is possible that its painter, Johannes Vermeer, studied under Fabritius. He was known and respected by the members of the Delft guild of painters, serving as head of the guild on four occasions. He worked slow, experimenting with light in a number of interiors whose walls are often hung with paintings or maps, in which milkmaids or astronomers or ladies are engaged in enigmatic occupation or preoccupied with unknowable thoughts.

It's stupid to single out one Vermeer, so I'll single out two: The Milkmaid and The Girl with the Pearl Earring. The latter has become even more universally known, I suppose, since the publication of Tracy Chevalier's novel of the same title, and the 2003 film made from it. As I stood gazing at the painting yesterday two women behind me were discussing it, one of them helpfully explaining many details of its production, meaning, and setting; she apparently took novel and film for absolute fact. They are pure fiction: but the film has marvelous views of Delft, and some haunting imagery of the studio and, especially, the grinding of pigments. The blue of the turban is lapis lazuli ground to powder: these paintings are rare and beautiful partly because they are literally made of rare and beautiful things.Upstairs from the paintings from the Mauritshuis (which remain on view only through June 2) there's a striking installation of three paintings by Joan Brown (1938-1990), a seated Swimmer by Manuel Neri (b. 1930), and a pensive Bather by Elmer Bischoff (1916-1991), all San Francisco Bay Area artists. (Neri is a sculptor; Brown and Bischoff were painters.) I have always felt the Bay Area of, say, the years since World War II has constituted a cultural energy-spot that can be ranked with the communities mentioned above, particularly in the visual arts but with literature and music not that far behind. 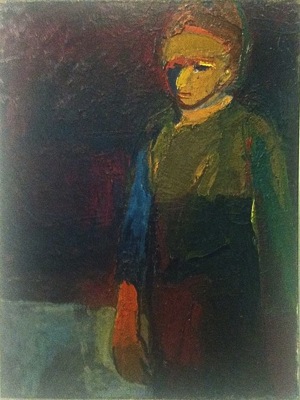 Joan Brown's painting of a girl, from about 1960, is an early canvas among her considerable output, but she was an early master. It was marvelous to contemplate this strong but muted painting with the enormous poster based on Vermeer's painting available simply by turning my head — and with the recent memory of the Vermeer to have for ready comparison. The similarity of mood, though not of execution, is unmistakeable, I think.

The degree of community here! Brown and Neri were married; Brown was the sitter to Neri's sculptor of the seated swimmer; their son Noel is depicted in her painting Noel and Bob, hanging nearby. Noel's eyes repeat Joan's, as Neri paints them on his plaster sculpture. Walking about Delft, by the canals, after dark, on a quiet night, you can be forgiven for thinking you know a little bit what the town may have been like in the 17th century. I know better, I think, what existed among Brown and Neri and Bischoff, and no doubt their work speaks more quickly to me because I knew them and their voices, let alone the streets they walked. They were — and Neri still is — deep, contemplative, yet sociable artists, living the experiences we all do, responding to them, and to their predecessors, with the greater insight gained through knowledge, discipline, patience, and commitment. We are all so incredibly lucky such men and women live and work among us.

"I think culture is primarily local — think Vienna in Mozart's day, or London in Johnson's (not to say Shakespeare's!), and Paris at various times."

I've made the point over and over again that in the great European nations--France, Britain, Germany, Italy, etc.--there was only a single cultural capital. I.e., in France, everything gravitated towards Paris. In England, London. In Italy, Rome. But in America, we occupy the better part of a whole continent, enabling a proliferation of cultural centers--regionalism, really, which prevented the complete domination of the country by a single cultural "capital." The Eastern Seaboard has tended to dominate our literary life, generally, but there are smaller "scenes" in San Francisco, Chicago, Los Angeles, Seattle, etc. Though somewhat marginalized, they've developed separate trends and characteristics. Why should New York's view of the world dominate every part of the country?

Could Bischoff have thrived in New York? Could Ruscha have produced the same body of original work in New York? Could Robert Duncan have created his unique body of writings on the Eastern Seaboard?--doubtful. How about William Stafford? Richard Hugo? William Faulkner. Steinbeck. Bukowski. Brett Weston. Gary Snyder. Carl Sandburg. William Clift. The list is really endless once you get started.

Thank god for regionalism, and separateness, and isolation, and the originality of exile.