Announcing my debut as editor-publisher 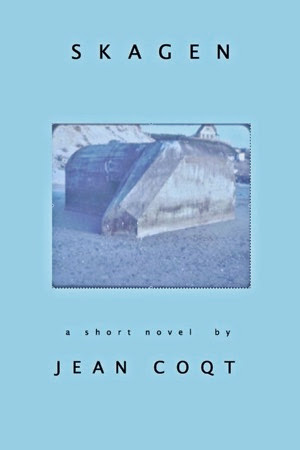 Eastside Road, December 6, 2014—
I  MET AN INTERESTING man a year and a half ago in, of all places, the waiting room of a chiropractor, in Nice, where I had finished a long hike in the French Alps. We found that we had in common that we were waiting while friends were under treatment, that we were Californians, and — on our having exchanged cards — that we shared first names.

Beyond that, we were both fond of literature. In fact it was on learning that I had published a few books, exclusively of my own writing, that he offered his card  — which revealed further that we very nearly share monograms: for his name is Charles Lunaire, 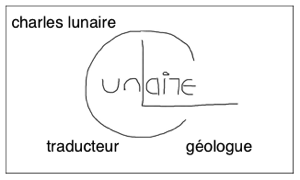  
and I combine my first initial with my companion's: 

With his card Lunaire handed me a challenge. Many years previous, while a university student in Grenoble, he'd befriended the proprietor of a second-hand book shop he often visited. One day, when the two were talking about French literature and particularly about Proust, the shopkeeper mentioned a novel in typescript that had been left with him years previously. Of its author he knew only his name: Jean Coqt.

The shopkeeper recalled Coqt as a vague, uncertain fellow, nondescript as to dress and expression, well read but not particularly enthusiastic about any particular region of literature — attracted or not almost equally to history, poetry, theater, music, gastronomy; uninterested in only mathematics and the physical sciences. (This had particularly annoyed Lunaire, who was at the time devoted to the study of geology.)

Why had this meek, reclusive man brought an enormous typescript, hundreds of pages of cheap foolscap covered with smudged, carelessly typed sentences, to a second-hand bookshop? The shopkeeper could only surmise that the poor fellow was near the end of his rope, had dedicated who knows how many years to the effort, had probably not even finished the thing, had to free himself from the obsession, couldn’t bring himself to burn it, wanted it to survive somehow. He’d pretended he was hoping for comments on it, but he must have known the shopkeeper was very unlikely to bother reading it. And in fact he’d simply set it up on top of one of the bookcases, where it gathered dust and cobwebs until Lunaire happened one day to see it while reaching for a volume of the Archives de la Commission Scientifique du Mexique publiées sous les auspices du Ministère de l’Instruction Publique. (Lunaire remembers the title clearly, and still regrets not having purchased it.)

Lunaire said that he’d read only the first quarter or so of the novel, and had been impressed with the style — somehow engaging, easy to read, yet not quite in focus. He seemed unsure as to the point or plot. The novel, which is called Skagen un roman de l’Europe, apparently consists of a number of independent novellas or stories, each bearing the title of an unimportant European city, each in a different country. Perhaps, Lunaire said, the book is about Europe, but it is not a history or a geography; it is a novel, in fact, whose characters are perhaps nations, or villages, or geographical features, or events.

Well: I was curious about this Coqt, and his writing. I said I’d like to see it, but that I certainly wouldn’t consider publishing it myself. For one thing, I have things of my own I still want to get into shape; for another, my French was certainly not up to the job. But then Lunaire threw a curve: he said he’d translated the first section into English, more or less without meaning to — he makes a little pocket money translating from French to English, and can’t seem to help scratching out English versions of certain French passages when he reads, even if there’s no pecuniary reason for it. He’d send me that first section in an e-mail, if I liked; he’d be curious to know what I thought of it, of the translation, and of Coqt’s style.

A few months after my return from France an e-mail finally arrived, with the first four or five sections — you can hardly call them “chapters” — of the opening of Coqt’s novel, the book giving its title to the entire project: Skagen. I was immediately impressed, and asked him to send the rest when he’d finished it.

That took another month or two, but eventually it came, with some notes of his own. I had hardly any editing to do, and that for three reasons: the copy was quite clean; Coqt’s writing (in Lunaire’s translation, at least) is eccentric and best untinkered with; and besides, I’m a little lazy. I do enjoy page layout, though, and had fun trying to make a real book out of what is in fact only twelve or fifteen thousand words.

I sent a .PDF file of the result to Lunaire, and he almost immediately wrote back, approving my work enthusiastically — it had inspired him to get to work on the translation in earnest. He had a few little corrections to make, but nothing serious. And in another three months he sent the next section, Tarifa.

I hesitated a long time over how exactly to publish the entire Skagen. Should I wait until Lunaire had finished the whole thing, and publish it as a single volume — or, more likely, a two-volume novel? Or should I go ahead and publish the individual books as Lunaire completed them, on an analogy with the serialized novels of the Victorian period, or those books that were published in fascicles, a century or more ago?

Lunaire’s own unpredictability furnished the answer to that riddle. After Tarifa, not a word from him for months. I decided to shelve the project and get back to work on my own things. But then, just a couple of months ago, he sent three e-mails with extensive sections of a third book, apparently called Vianden or Veinen, it’s not yet quite clear. It’s as different from the first two books as they are from one another. And he tells me he’s working simultaneously on a fourth, though it apparently doesn’t follow Vianden immediately in Coqt’s typescript — I don’t know why Lunaire has skipped a book or two, and I’m not going to ask.

All this to announce that, yes, just in time for Christmas, the first two instalments of Skagen a novel of Europe are published, complete with ISBN numbers. Like most of my own books they’ve been printed and bound by the online publisher Lulu, and for now that’s where you can buy them. They sell for $9.95 each, and shipping is extra. You can order them here.

I’m pleased with my work on these books, and excited that a chance visit to a chiropracter has led to the introduction of an unexpectedly interesting and completely unknown voice to the canon of modern literature. Please encourage Lunaire to continue his translations; order copies of Skagen and Tarifa for yourself, and consider them as gifts for the new year!

You and your literary friend seem to be playing Max Brod to Jean Coqt's Kafka.

The mystery of this book reminds me of Georges Perec's The Winter Journey (Le Voyage d'hiver), which also relates to a found book. But the odd thing is that at first the book appears to be a compilation of quotations and borrowings from all the major writers of the 17th-20th century. But later, it turns out that the writer, Hugo Vernier, lived centuries earlier, and all modern literature was, in fact, a borrowing from him!