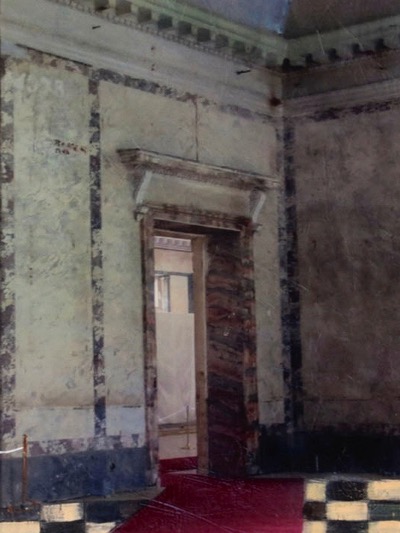 A CORNER OF THE BLEAK Gatchina Palace, outside St. Petersburg, as painted earlier this year by the California artist Inez Storer. And this is just a corner of the painting, too — or, rather, a detail taken from nearly the center of the painting, the entirety of which I'll set at the end of this post.

Before going further I should mention that I've known Inez for more than forty years, and that over that period she and her husband Andrew Romanoff have become friends. We don't see them often: They live in their corner of the area, we in ours; we're all busy; we all travel … but they're good friends, the sort with whom there can be silences, even quite long ones, and then the conversation resumes.

I met Inez in 1974, when she participated in a group show at the Mills College Art Gallery. In those days I taught a course in music history at Mills as an adjunct instructor, and I wrote cultural criticism, especially art criticism, for the Oakland Tribune. I was particularly struck with Inez's work. Reading the stuff that Charles Shere wrote can sometimes make me cringe now, but here's what I had to say:

A real find In this show is a painting by Inez Storer: "How to Land a Plane on a Painted Mountain.” The title may actually read "Pointed Mountain": the calligraphy is ambiguous, and so is the painting itself. Flatly executed in the lusciously “crude” style associated with Joan Brown, Fred Martin and Richard Diebenkorn, the picture is intelligent and sumptuous.

Storer's corner of the show is rich in many respects. There's a considerable variety to her work. expressed in paintings, drawings and assemblages. Her work is idea-oriented, but not merely cerebral: it always gives the eyeball its own rewards.

Many of the assemblages seem to parlay a methodical, almost compulsive rhythm, generated by continuingly accumulating details, into a fearful expression of emptiness and domesticity. "House Plans and Diagrams" is a three-level shallow wall-hung box, " each of the three “floors" strewn with glass marbles, each with a figure: a clock-gear-bellied, headless representation of pregnancy on the top; a doll's head on the middle; the beheaded doll standing on the lower level. Photos of a woman suddenly thrust out of the walls. The total picture is unnerving.

A series of drawings and paintings on the subject of dreams shows how introspective this painter is. "Dreams" presents a drawing of a bed, its headboard collaged in fabric scraps, a photograph of a sheep on the bed, a fragment of an old letter in sepia copperplate ink leading off the bed to an old-time group photo of a bunch of men in a campsite out West.

"Mountain Dream" incorporates a picture postcard into a painted landscape which turns into a bed somehow. The intellectual, "conceptual” aspect of the composition is underlined by two indications of size in the margins, making the final work part a painting, part its own sketch.

I liked How to Land a Plane on a Painted Mountain so much that I bought it. I bought a number of paintings during the years I worked as an art critic. I never ran the idea past my publisher: I wouldn't be surprised if he would have objected, citing the appearance of conflict of interest — an objection I generally disagree with: I think community of interest is closer to the mark. In any case since I've never sold, or wanted to sell, any work of art I've bought, no "interest" is really present.

I bought paintings because living with them continually reminded me to look, and taught me, I think, how to try to understand, and to make use of, the things I saw. This is the great gift of painters, of artists: they respond to the world for us. "The highest function of music," J.W.N. Sullivan writes, "is to express the musician's experience and his organization of it." (Beethoven: His Spiritual Development (Alfred A. Knopf, 1927), p. 34.) True of all the arts: he goes on to say "art is not superfluous… it exists to convey what cannot be otherwise conveyed."

LET'S COME BACK to the painting at hand, Greta at Gatchina Palace. Like How to Land a Plane on a Painted Mountain, it incorporates painting and collage on the technical level, and personal memory and meaning when it comes to the content. Inez's father was a pilot and an art director in Hollywood; he had emigrated from Germany to evade the Third Reich. Her husband's family, the imperial Romanovs, were deposed and indeed executed during the Russian Revolution. The Gatchina Palace was, I understand, one of their residences, and Inez and Andrew toured it recently.

There of course they took a number of photographs. Inez makes prints at Magnolia Editions in Oakland, and there, on their huge flatbed scanner, she was able to make digital photocollages; one result was layered on gesso on canvas to serve as the ground for the painting.

I think of many levels of meaning emerging from this technique, whose layers of both image and technical handling are like the layers of significance latent in our personal memories and experiences. Again, and forty years later, the final work is part a painting, part its own process. And as the viewer's eye explores it, particularly when the eye is informed by awareness and knowledge of the personal meaning within the work, the viewer repeats the painter's journey into and through the work.

I spent a fair amount of time with Greta at Gatchina Palace. (For me, that is: I'm an impatient attendant, always in a rush to experience more.) I investigated it close to; I crouched near the floor to look up at it; I backed slowly away from it; I approached it in a spiraling trajectory, with one eye closed, focussing on one detail or another. (Fortunately my patient companion was the only other person in the gallery at the moment.) I found a favorite focal point: the stanchion that can barely be made out in the corridor beyond the doorway in the corner of the room. You may be able to see, in the detail reproduced above, a white rope supported by that stanchion. You cannot see, unfortunately, the amazingly true depiction of the metallic shine at the base of the stanchion.

Inspected this actively, many aspects of the painting jump into relief. The lintel above the doorway thrusts away from the wall, and the marble lining the doorway jumps back and forth, now holding the picture plane, now flipping into perspective, helping to draw the eye through the passageway into that corridor.

This alternation is helped, of course, by the collision of the photorealist perspective of the walls and corner with the arbitrary flat grid of the checkerboard floor. Again the viewer, like the painter, is poised between two ways of interpreting what is seen. This is what contemplation leads to: the fuller understanding of what is seen, resulting from the superimposition on objective reality (if any such there be) of accumulated layers of meaning brought in from memory, from learning, perhaps from misleading commentary, certainly from interpretation. INFORMATION.

To look actively at a painting, both physically as I've described my gymnastics in the gallery and intellectually as I've suggested through the consideration of supplementary information — this is one of the great pleasures. It recapitulates one's confrontation of life itself. It's an indispensable part of criticism, and criticism, I'm afraid, is an indispensable aspect of my own approach to life. Criticism: "the study of the meaning and the value of art works." (Joseph Kerman: Contemplating Music: challenges to musicology, Harvard University Press, 1986.)

Inez and Andrew's personal experiences draw on Europe and America, the Third Reich and the Russian Revolution, Hollywood and Buckingham Palace, the events of the 1960s, the art and social setting of the San Francisco Bay Area, teaching, family, and the usual vicissitudes that accumulate in eighty or ninety years of life. By turns funny, absurd, sad, nostalgic, improbable, these experiences of course inform their work. In a sense their work is incomplete without the experiences, though of course the work also, contradictorily and fortunately, stands perfectly well without one's knowing of them.

Fortunately, an attractive, small, coherent, copiously and well illustrated book has just been published, presenting a fair number of Inez's paintings and prints, together with short but useful (and entertaining!) accounts of her life and work. Allow Nothing to Worry You is a small-format book, 8-¼ inches square, 104 pages, case-bound in hard covers, with texts by Bonnie Gangelhoff, Timothy Anglin Burgard, Bill Berkson, Maria Porges, Barbara Morris, and Inez herself, along with the expected lists of exhibitions and biographical notes.

I particularly like Berkson's comments, with its final paragraph:

Storer has spoken of her vistas as having "no perspective, no beginning or end." Even so, seeing what happens within them, the viewer knows the size and distance appropriate to any detail, and the scale of the territory at large. Props — a ladder, a dinghy, a family of chairs, a cap, a monkey dropped on a Parisian thoroughfare — lend leverage, both graphic and psychological. That fabulations so thoroughly nuanced can come across as declarative throughout, so all-there at a glance, is a measure of Storer's commitment. Poise, the work invites us think, amid the indignities of human self-awareness, is no soulless window dressing, but a wonder regained by turns.

BUT LET'S LOOK, finally, at the painting we started out with, Greta at Gatchina Palace. The room is seen as it is, abandoned and in disrepair, and as it was or might have been, opulent in its rococo decoration. Hollywood, and things not being as they seem. An improbable blue kitchen chair (Berkson felicitously refers to it as "perennially talismanic"). A painting of Greta Garbo, recognizably in Inez Storer's style. The inevitable red carpet, leading inexorably to that doorway, and the passageway to an unintended destination out of sight around a corner. A large window illuminating the interior while concealing the world beyond, and its source of light. Vermeer's incessant and obsessive tilework floor.

Hans Hofmann would recognize the "push-pull" of the planes of color and pattern, though he'd be unlikely to approve the possibly narrative implications of the imagery containing them. Even on my computer screen I fall into this painting as I gaze at it; my gaze is itself a passageway leading me into it. Seen with one eye, while my head moves slowly before the image, or quickly approaches, then backs away from the screen, the perspectives change and develop. Somehow the contradictions of planes and perspectives enter into a kind of conversation, exploring various possible arrangements, of resolutions.

Storer's work has been called "magic realism" — the term comes from literary criticism, specifically describing such Latin American authors as Borges — but I think this painting disdains questions of category. It doesn't matter, either, that the work involves so many techniques. Since Picasso and Braque glued newspaper clippings to their paintngs, a century ago and more, painting has meant more than the application of colored pastes to flat expanses of cloth or paper. Painting is the act of bringing color and texture to a visual consideration or expression of meaning.

A painting like this, a life like Inez's, can instruct us in the possibilities, perhaps even the methods, of resolving apparent contradictions; of enlarging meaning; of expanding our awareness, not only of a painting, but of our own lives, and of the world they engage.

Posted by Charles Shere at 7:07 AM