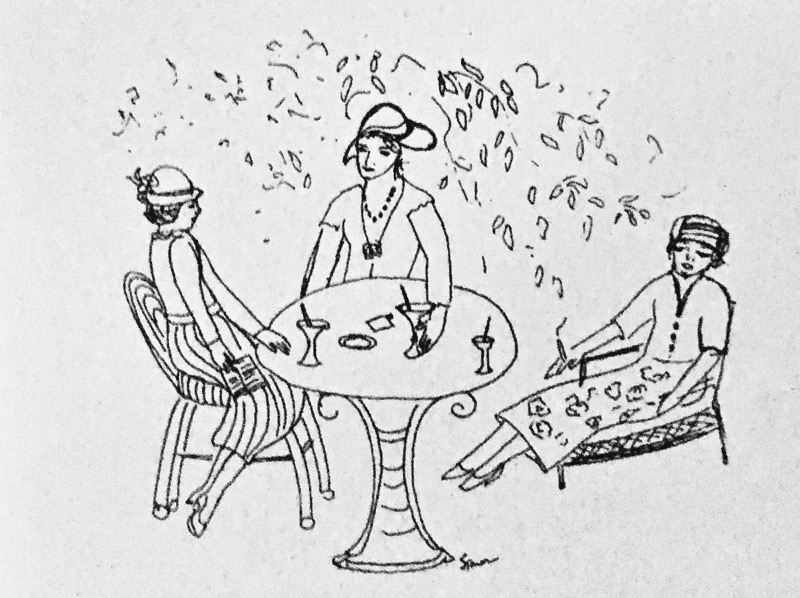 an opera in five acts to words by

commissioned by the Noh Oratorio Society for
JUDY RUTH HUBBELL

The Noh Oratorio Society flourished in San Francisco during the 1980s, largely (as I believe) through the benign creative energies of Claude Duvall, calligrapher, actor, stage director, litterateur. The Noh Oratorio Society had a wide range of interests, but always put a priority on the human voice and the use of language: they produced, for example, Michael McClure's ! The Feast ! in 1982; Chaucer's Parlement of Fowles in 1987; Edith Sitwell and William Walton's Façade in 1987; Robert Duncan's Faust Foutu in 1989; and many other works in various venues in the San Francisco Bay Area over a course of twelve or fifteen years.

I have no idea why he or his Society asked me to supply them with a little opera: probably through our shared enthusiasm for Gertrude Stein, some of whose poems I had already set as songs for voice with various instrumental accompaniment.

The brittle, hectoring music of the opera was composed on a Macintosh computer, as an exercise for a course I was taking in computer composition at San Francisco State University, taught by the composer Herbert Bielawa. We worked with the Apple Mac Plus computer, using software produced in those days by Mark of the Unicorn: Professional Composer for notation; another program whose name I don't now recall for a sequencer.

The classic Schoenbergian manipulations of melodic material are Transposition, which is setting the tune on a different starting pitch; Inversion, which is the tune upside-down, you might say; Retrograde, which is the tune stated backward; and of course Retrograde Inversion, which is both methods used simultaneously. These are easy techniques for the computer, which allows the composer to select a melodic passage of virtually any length, copy it, and paste it into the score elsewhere — in a different instrument, on a different pitch level, with augmented or diminished note-values (longer notes, shorter ones), or upside-down, or backward Ladies Voices takes advantage of these possibilities.

It is also a study in harmonic writing that avoids conventional tonality, following sporadic discussions I had had in the course of various visits with Virgil Thomson, and an early example of a growing obsession with counting: in the first act, for example, the snare drum sounds five notes to introduce the first soprano's first word, "Six," and 75 notes in all before the third soprano's last word, "Seventy-five."

The opera sets two plays of Stein's: A Curtain Raiser (1913) and Ladies Voices (1916). David M. Boje has written of Stein's theater with insight:

Gertrude Stein wrote 77 plays between 1913 and 1979 that fall under the general heading, Theatre of the Absolute. Absolute Theatre sacrifices developmental story (the dynamic movement to climax and receding from it) in order to invite the spectator to explore the present moment, and to stay in the present tense of theatrical experience. Stein was focused on opening a space in time, to explore the present moment. Stein wanted to free herself from the grip of developmental storytelling, the progress of time imposed upon story by the coherent narrative form that dominates traditional theatre. Stein sought to break free of the alternative reality created in developmental storytelling, and instead let the play be the reality that the spectators made sense of in the present moment of performance. …

A Curtain Raiser (1913), and Ladies' Voices (1916)… attempt to focus the spectators' attention on the present moment, on unfolding rhythms and textures(e.g. a series of non-referential numbers), with fragments of conversation, etc, all without a developing storyline. Instead of the progress of a coherent (linear) storyline with beginning middle and end, Stein uses fragments of dialogue that isolate from other fragments of dialogue.

(In the Four Seas (first) edition of Geography and Plays, in which the text was first published, an apostrophe sometimes occurs in the word “ladies,” sometimes does not. It has been suppressed throughout in my opera in the interest of consistency.)

I set the two plays in sequence to make a chamber opera in five acts exploring the psychological and musical nuances of three ladies of Gertrude Stein's milieu — the cultured, literary, leisurely set of liberated women in the first decade of the 20th century. Neither plot, setting nor scenario are supplied in Stein's text, but I see no reason to suppress them in production. I imagine a rather tense situation, with the second and third soprano pairing off apart from Genevieve, the first soprano, whose spiritualist trance in Act III contrasts with the amorous play of the other two ladies in Act IV.

I would prefer the instruments to be unseen by the audience, but would like three men and a string quartet to be upstage somewhere in the drawing room of Act II, the quartet possibly to be miming the performance of the opening of my second Stein opera, I Like It to Be a Play.

Act I (Curtain Raiser): The Theater, before the curtain (During the second performance these titles were for some reason spoken aloud at the beginning of each scene. This need not be considered a precedent.)

The three sopranos stage center right, discussing quantities among themselves. Winds and percussion in pit, if available, or in wings, or upstate right behind curtain; in any case unseen throughout the opera

A fashionable room in a Tuscan villa, ca. 1912. The ladies are in afternoon dress, probably at tea. The winds and percussion remain invisible, but a string quartet may be seen upstage left, alternately playing (silently) and resting, talking among themselves. The members of the quartet are never heard.

The french windows at the back of the drawing room have been opened, exposing a flagstone or terrazzo terrace leading to a small formal garden beyond. Chaises-longues, side tables, a bar trolley. The string quartet no longer so evident; or perhaps its members are soundlessly among the company; or functioning as waiters, bartender, etc. The three ladies grow more expressive and animated.

Twilight. The ladies have descended the steps into the near areda of the garden. The men are rarely visible, and that only at the extreme sides of the stage, engaged in mute conversation or business. The mood is expectant.

I rehearsed and conducted the first two performances of Ladies Voices. The second performance was recorded, though not very well. (The recording reveals the interpolation of A few years later I was asked to change the orchestration for a performance at The College of Notre Dame, in Belmont, with unsatisfactory results.

The score was published, with a cover illustration, reproduced above, by the San Francisco painter Inez Storer, by Fallen Leaf Press, in 1996 (Fallen Leaf Publications in Contemporary Music (ISSN 8755-2698), No. 78.) It is available, with a set of instrumental parts, from Frog Peak.

The recording can be heard here.

Posted by Charles Shere at 7:51 AM