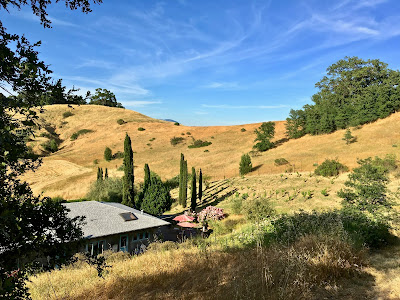 I  THINK OF space, measure, marks, and accent. Why? Partly because I live in this landscape: except when traveling, it is my everyday context. The lineaments and proportions of ridgeline, gradients, swales and hillocks; and the markings of windrows of cut grass, of cypresses and grapevines, mold and reinforce the way I see. And for that reason, perhaps, partly because that is how I seem to respond to what I read and hear. The other night, for example, we went to a production of an adaptation of Pierre Corneille’s Cinna. I don’t know Corneille well, that’s for sure; of his thirty-odd plays I think I’ve only seen L’Illusion comique, in an adaptation by Tony Kushner. (That was at the Pasadena company A Noise Within, which I support because it mounts productions of French repertory. Five years ago! I wrote about it here.)

I think you could refer to Corneille's plays as examples of French baroque, along with those of Jean Racine. When through with my summertime reading agenda I must turn to those two: as they pivot from the baroque toward Romanticism, reading them should nicely accompany the autumnal season.

I wanted to attend this production chiefly because it was accompanied by Lou Harrison's incidental music, composed in the late 1950s, when he too was thinking about the baroque, and had definitively left New York, and modernism, for a near-rural life in Aptos, California. I remember visiting him there in his cabin and seeing and hearing the tack-piano for which he scored Cinna, an upright piano with ordinary metal thumbtacks pushed into the hammer-felts, producing a sound reminiscent of the grand harpsichords on which Rameau's and Couperin's music is so glorious.

The piano was tuned in just intonation, based on today's concert "G," with, I think, an eleven-limit, meaning it was faithful to the acoustical overtone series up to the eleventh partial. Somewhere I have a recording of Lou playing one of the intermezzi of his Cinna on this instrument, and for a long time I thought that was all there was to it, three or four minutes of remarkably spacious animation, decorative, supple, sweet, and strong, like so much of Lou's music, and measured, like the sound of the narration at the opening of the Alan Resnais film Last Year at Marienbad, also a favorite of mine.

Corneille's Cinna is in the requisite five acts, respecting the classical unities of time and location, and Lou (I knew him well enough that it feels unnatural to refer to him in any other way) wrote in fact five pieces, each, I feel sure, intended as a prelude to the following act. But last week's production was an adaptation, in English, boiled down to about forty minutes, read by its adapter Larry Reed, who modified his voice slightly to distinguish the major characters. (Each of the five acts, presented without intermission, was preceded by its opening lines in the original French, a marvelously evocative way to mark off the dramatic structure.)

The "actors" were shadow-puppets — wire representations of faces, in profile, of those principles (Octavius Caesar Augustus, Livia, Cinna, Maximus, Emilia, and the lesser roles Fulvia, Evander, and Euphorbus), manipulated behind a scrim. Lou, I think, would have approved this; it recalls his later opera Young Caesar, originally intended for large-scale puppets; and somehow it reveals the subconscious affinity of the baroque, and especially I think the French baroque, with certain Asian theater.

Linda Burman-Hall played the tack piano, and gave a little talk before the performance, explaining the instrument and suggesting that the music was intended to be descriptive of the characters in the play. This could be, but I'm not so sure. I think Lou was primarily an abstractionist, and that his music is descriptive of qualities, not personalities, though perhaps this is what Burman-Hall meant. In any case she played splendidly. (Her recording of the music can be bought online at the inevitable Amazon.)

WHAT APPEALS TO ME in Cinna is its measure. The play is about a conspiracy to assassinate Caesar, its discovery, and his forgiveness of the plotters who have proven their sincere remorse. As ever-helpful Wikipedia writes, "Corneille addresses the question of clemency and advocates an end to spiraling vengeance. His response is apologetic towards absolute power." He wrote, after all, largely with the indulgence of Louis XIV, during a time when social stability, if it were to be achieved, would depend on a stable structure itself dependent on a sustainable system of unequal social orders: Emperor or King, lesser nobles, clerics, merchants, peasants.

The social structure collapsed under the weight it built up at the top, through greed and the insistence on gloire, that majestic splendor which illuminates and radiates from absolute power, justifying it to the lower orders. In the mid-17th century France may have succeeded, for a few years, in maintaining the equilibrium; a century later of course it was crumbling toward the Bastille. (I wonder how all this will look a century hence.)

Lou's music itself is technically what is called "unmeasured," as I believe. (I haven't seen the score.) That's to say, it isn't barred off into regularly repeating "measures" of equal lengths, based on regular beats proceeding at a steady pace. This has always seemed a misleading terminology to me: the measure of the resulting music is felt by the performer, and expressed to the listener, in some other way than by the motor rhythms common to the music we mostly have in our consciousness (and even below that), whether it's "classical" concert music or commercial entertainment music.

Lou and his friend John Cage — they worked together for years — were greatly interested in this quality, which perhaps had something to do with the parallel historical development of abstraction in the visual arts. (And, to an extent, the literary ones: Gertrude Stein was the pioneer here, though I think perhaps even Proust is best read with measure in mind, more than narration.)

Their friend Virgil Thomson, the composer and critic of the New York Herald Tribune (where he hired Lou and John to turn in occasional concert reviews, always informative and entertaining), said that there were two kinds of (European-tradition) music, that based on song, which is vocal and strophic, and that based on dance, which is pedal and repetitive. Then came the 19th century and Romanticism and a third type, which he called spasmic, based on the movements of internal organs of one kind or another, mostly one in particular.

It's a cute summary and a useful one, but one result was the determination, by John and Lou, that it was high time for another approach to music, one that renders the listener tranquil — that is, in a non-self-absorbed state — and receptive to divine influences. And it's thence, I think, grows the concept of measureless music, music that requires the suspension of regular markings and events. Lou turned to the baroque — he'd earlier been much interested in early 18th-century Spanish music as known in the California missions — and John turned to purposeless abstraction reliant on chance procedures.

Of the historical events and processes I've known over the last sixty years and more I regret most, perhaps, the institutional neglect and contempt toward the procedures of the mid-20th-century avant garde. I lack John Cage's serenity in the face of that monumental social failure, and I have misgivings about Lou's apparent evasion, his withdrawal into gamelan. Apparent, I say, because I am certain within himself this was a perfectly successful adjustment to his position: but it is perhaps wrongly interpreted as an acceptance of and adaptive use of that quintessentially social and performative music, where I believe it was a recognition of a quality too easily unnoticed by the listener and even the performer: the spatial, long-measured structure enveloping the incessant (and to me distracting) motor-element of the beats.

Maybe it’s just the feeble complaint of an old man, but it seems to me we mostly lack an awareness of scale, an understanding of spaciousness, an appreciation of the long view, the big field. As societies and as individuals we lose ourselves in incessant nervous activity: we fidget. Of course fewer and fewer of us live among hills like mine; most of us are indoors most of the time, and the view out the window, when there is one, is likely to be the confining grids of rectilinear buildings across the straight and busy streets. John enjoyed it, serenely busy in his spare rooms above the noisy West Side. Virgil, that utterly urban francophile, seemed to take it for granted, basking in gloire.I can’t take it for long; it drives me nuts, as it did Lou.

Posted by Charles Shere at 1:48 PM