New book from Rome: Where to Dig, and How Far Down 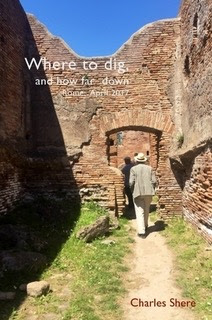 Portland, June 25, 2017—
PUBLISHED, HERE AT peripatetic Ear Press: Where to Dig, and How Far Down, an 80-page paperbound book containing the writing posted here last April while I was in Rome.

Well, the title. You have to give a book a title, and something like Rome, April 2017 seems pretty lame. (Although it would probably get more clicks: Rome is a popular subject. I followed my usual process when titles don't come readily to mind: open the proof copy half-way and look for a random phrase. No luck. All right, open another half way to the end. Still no luck.

Hmmm. Zeno warns against proceeding further toward the end of the book; let's go halfway back to the last halfway point. Ah, there it is:

Poor Italy! Preserving, interpreting, ignoring these ruins, these and many others — Italic, Etruscan, Greek, Roman, even medieval — must be a constant headache. The archaeologists have to decide where to dig, and how far down. The government, I suppose, has to decide when to protect, when to recognize the futility of any thought of perfect control. And of course these historical records are an important tourist attraction; Christian or not, one goes to Rome to savor and contemplate all this history.

I've been working on another writing project, whose results may or may not appear here. It's a study of the ruins of my life — something of intermittent interest to me, but probably to few others. The first question, then, is how to make it interesting: but short of that process there's the mining, the digging down through such ruins as journals, clippings, pocket calendars, photographs.

And, always, memory. I relied on virtually nothing but memory in my first venture in memoir, Getting There, published ten years ago: two hundred pages covering my first thirty years. That book, I thought, might have some value as a cautionary, and I gave copies to various grandchildren as they left high school: Don't commit to a career too soon, be ready to profit from luck, embrace the liberal arts, that sort of thing.

This next venture, though, has to be written differently. For one thing there's a lot of public record: my own career, which took me into journalism of sorts, was not only public but also documented through clippings and the like. Better check those memories out in case you have entirely the wrong date — or, worse, the wrong source, or the wrong guy!

But it's always a question of where to dig, and how far down. It's easy to get distracted. There's also the danger that the act of digging will destroy the stuff you're digging through — in this case, wrecking a story by getting it straight.

In any case, this Rome book turned out, I think, to be a series of meditations — on history and the present, Christianity and not, faith and belief, thinking and walking. That delicious conversation between inner contemplation and outer observation so facilitated by travel, especially this kind, anchored to an unfamiliar residence for a month, but within a setting familiar from previous visits over the years, rich with its own history Thucydides knows, but made richer by conversations with a granddaughter who lives there, and shared with other members of the family.

Anyhow, I'm rambling. Where to Dig, and How Far Down. Healdsburg: Ear Press (self-published through my favored online publisher Lulu), 2017. 80 pages, paper, b&w photos. $7.95 plus postage. Click on title to order.

Posted by Charles Shere at 9:01 AM