The Old Contemplates the New 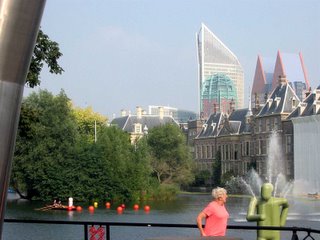 THIS PHOTO OF THE BINNENHOF in The Hague, taken last September, keeps pushing toward the front of the desk, I don’t know why. The Hague used to seem stuffy and snooty to me, and in fact I was told, years ago, that the Dutch themselves use the term haagse, "haguish" I suppose would be the translation, to mean something like nose-in-the-air.

In recent years that’s changed, and The Hague seems more like Los Angeles, or Sydney, less like ... well, the Boston of old. I suppose Boston has changed similarly.

The Binnenhof is at the center of The Hague: it’s the complex of governmental buildings, a fine old castle of a complex, in fact, its oldest rooms dating back to the 13th century. That’s it on the right, the brick building with all the dormers, beyond the pond which itself is, I suppose, a remnant of the old defenses around the castle.

Above and beyond the Binnenhof rise three of the many new buildings which have so changed The Hague, brought it into the late 20th century you might say. Twenty years ago I would have hated all this, but now that I’m seventy years old I better understand that Change is not a jerky motion from one state to another, it is the constant flux, stately at some times, astonishingly quick at others, without which there is no life.

And here in The Netherlands this change, at least in this period, is being done with such style; and the style contains so much good humor! The sharp brick gables on the rose-and-blue skyscraper at the right comment on traditional Dutch canal houses, and more specifically on the gothic roofs of the Binnenhof. That curious copper-blue-green cupola on the brick tower to the left of them -- some architect’s comment on the dome, of course; but also the traditional structure of the once-ubiquitous Dutch windmill, lacking its sails.

In the foreground, the Dutch fondness -- an obsessive fondness, really -- with sculpture. And how the substantial Haagse lady in her pink T-shirt confronts this green abstracted speedwalker, and how the jets of the fountain beyond him lend angel’s plumage to his shoulders!

The people in the boat -- you won’t believe this -- are installing another sculpture, a temporary one I suppose, consisting of gaily colored spheres floating in the pond. I don’t know if they’ve finished and are rowing away, or whether they’re towing it around the pond, or whether it’s chasing them; it doesn’t seem to matter.

I think that’s the Mauritshuis beyond the trees, which in fact are growing on an island in the pond. The Mauritshuis is one of the finest art museums in the world, home to splendid Vermeers and Rembrandts and Ruisdaels, to Paulus Potters’s amazing portrait of a magnificent bull, and Carel Fabritius’s tender and mysterious portrait of a goldfinch.

Everything comments on everything else. This is urban landscape as conversation, a conversation marking a protracted present moment in a long and generally prosperous history of a civil and cultured society. I love it.
Posted by Charles Shere at 5:57 PM