Walking in the woods 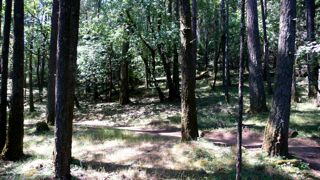 ANOTHER SUNDAY HIKE, preparing for the long walk beginning later this month. Off we went, Mac and Henry and I, to a local state park, there to leave the car in a $4 parking lot and tackle a really nice hike. Much of it was among trees, Douglas fir for the most part. Since we were off in a distant end of the park, accessible easily only by paying to park, we had the trail pretty much to ourselves.

There was the occasional "mountain bike," which I confess to having gradually evolved a prejudice against; and two or three times we met a couple of equestrians. Somehow the horses, and their riders, are less irritating, less "unnatural," than the bikers. They're slower, for one thing, and considerably more visible.

We climbed and descended and strolled along fairly level stretches, among the forest, in open fields which would clearly have been marshland at other times, and conversed, and worked our feet. Lunch: bread, salami, apple, walnuts, dried apricots, cookies. Then more walking.