I'M THINKING ALOUD, or rather my fingers are, mulling over what on earth I'm going to say for half an hour this evening about my Duchamp opera. Marcel Duchamp worked on his Large Glass, La Mariée mise à nu par ses célibataires, même, for twelve or fourteen years, definitively abandoning the project in 1923. It's two things: 1) a painting on glass, say two meters high, painted in mixed media (oil paint, lead foil, lead wire, dust, varnish) on two panes of glass; 2) a collection of notes, memos, and drawings that accumulated over the years he was working on the thing and was subsequently published in at least three different collections.

One of those collections, The Green Box, was published in a typographical version by the English artist Richard Hamilton, translated into English by George Heard Hamilton, in the early 1960s; this was my introduction to Duchamp. Soon afterward, the first retrospective of Duchamp's work was given by the Pasadena Museum; Lindsey and I borrowed Mom's car and drove down to see it. I was hooked. 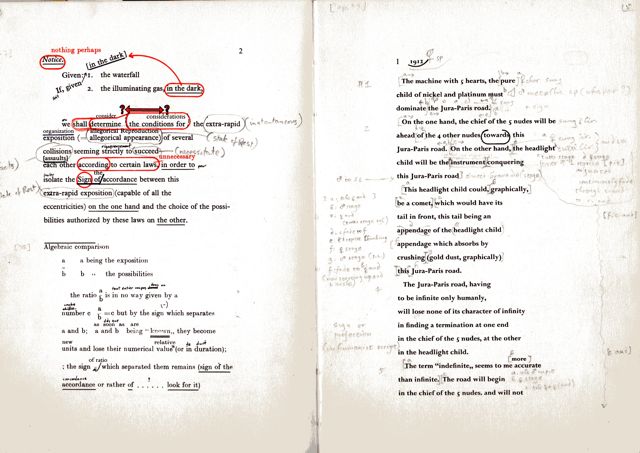 two pages of The Green Box
I'd already begun setting some of those notes and memos to music, working right in my copy of Hamilton's book; before long it became clear I was thinking of an opera. The Large Glass seemed to me to be a deep, detailed, resonant and serene landscape, and as Gertrude Stein says landscapes are suitable for only two things, battlefields and plays. We mostly all prefer plays, and I prefer my plays with sound.

That was 1964-1965. Two years later an early version of the music was performed in Berkeley, in October 1967. The next May Duchamp died. I was then working at KQED, and I wrote and produced a 40-minute obituary program, describing the evolution of Duchamp's work from his earliest paintings through to a guided tour of the Large Glass. For that purpose I made a fullsize replica of The Glass, paintings its elements on sheets of acetate.

In the meantime I'd been reading the growing number of books about Duchamp and his work, learning enough French and Italian to handle some of the best, and translating about half of Jean Suquet's Le Miroir de la mariée. And when in the middle 1970s we were able to begin traveling in Europe one of my first projects was to make a sort of pilgrimage of the places Duchamp had lived in, photographing them. On one occasion I even met his widow, Teeny Duchamp: Why didn't you visit us, she asked; I didn't want to intrude on you, I answere; The ones you want to visit always feel that way, she answered. 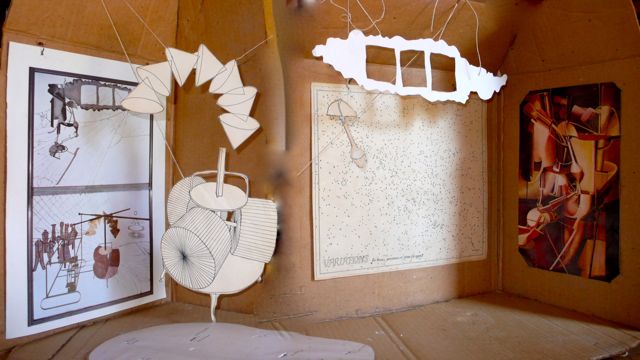 portable cardboard model stageset
I made a traveling kit of things related to The Large Glass and to my projected opera: a collapsible cardboard model stageset, with flying or detachable set-pieces, some repeating Duchamp's imagery, others things of my own — that's the score to Variations, for harp and percussion, on the back wall stage left. With it of course went the Hamilton edition of The Green Box and my steadily growing collection of manuscript pages and drawings.

In 1980, I think it was, the first scene of the first act was staged in San Francisco, with a young John Adams conducting the Conservatory New Music Ensemble. Somewhere I have a grainy black-and-white video of the event, which was not entirely successful. By then I was teaching part-time at Mills College, and in 1984, there, the entire first act was staged, in a wonderful mise-en-scène by the dancer Margaret Fisher, and the first three scenes of the second act were performed in concert form. 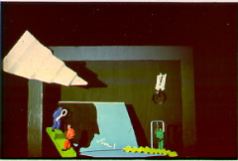 Margaret Fisher's model stageset
We were working toward a complete production, to be given a year or two later at the San Francisco Museum of Modern Art, but the funding was lost.

There exists an audio recording of the Mills College performance, though the original recording was lost in the Oakland Hills fire. The video of the Mills College performance is unfortunately only of archival interest. When the full production in San Francisco was scuttled I lost interest in the opera and turned to other things. I don't know if I'd want to have to work on a complete production, in the unlikely event one ever becomes possible. Some things are best left mythic.
Okay. Get to work on the talk!

Tilson Thomas gave one of his lectures the night before on Shostakovich's 5th, interpreting it as a veiled subversive complaint against Stalinist censorship. I'm not sure this makes complete sense, despite the fact that I've always felt Shostakovich's music seemed dramatic in a sort of programmatic way. "Struggle" and foreboding elegy.

The trouble with programmatic interpretations is several-fold. Certain rhythms and orchestral combinations are inextricably associated with specific phenomena. Bands (brass) with military and marches, for instance. Chimes with music-boxes.

There are some great movie music composers who've done innovative things with different sounds. Are you familiar with any of these?

The subject of influence came up in the post-talk discussion, stated and unstated. Alex North's score for The Rose Tattoo was a considerable influence on me as a young composer; I listened to the recording repeatedly, fascinated by the overlapping and cross-cutting musics within it. I didn't realize at the time how like Ives it was.