Asides on an Ebay Oboe

AS I KNOW I'VE mentioned before — ah yes; here it is — my instrument in high school was the noble bassoon — partly because as a young child I'd loved both Grandpapa in Prokofiev's Peter and the Wolf and the Sorcerer's Apprentice as brought to me by Walt Disney in his Fantasia, partly no doubt because the band teacher, Kenneth Knight of loving memory, has a bassoon at his disposal but no one willing to learn to play it.

One of my best friends at Analy Union High School was Merton Tyrrel, and he played the oboe. I always respected him for that, and for other things: he was handsome, self-controlled, well-spoken, intelligent; he seemed a good oboist, and of course he got a number of leading passages in the arrangements our concert band played at the annual spring concerts. (In the fall season we converted to a marching band, setting our double-reed horns aside in favor of sturdier things like saxophones.)

When I left home for college I no longer had the use of a bassoon, and I gradually lost interest in playing a musical instrument. For a while I made a scanty living giving private lessons in the recorder, but that didn't seem to count. Years later I played bass drum in a community orchestra organized with federal FEMA funds during one of the more enlightened recessions we had in those days, but that didn't last long. Nor did my participation in the Mills College orchestra put together by the late Sally Kell, for whom I played on the college bassoon, a wheezy instrument that I could barely negotiate through von Weber's Peter Schmoll Overture.

I always wanted to learn the oboe, but never did. Oh, I could play a C-major scale on it, faking it from bassoon fingerings, but that was about all. A few years ago we were in town killing time: Lindsey and our daughter Giovanna had gone on to the bookstore; I stopped off at a curious music store I'd never investigated, since gone out of business. I noticed an oboe in a display case and couldn't help betraying pleased surprise.

Oh, you play the oboe? the lady behind the counter asked. No, I answered, in a rare expression of incompetence. I used to play the bassoon, but that was fifty years ago.

Can you put it together, she asked. Yes, I can at least do that: and I carefully assembled the pieces, noting it seemed to be in good condition.

Can you at least show me what it sounds like, the lady asked; I've never heard an oboe. No, I said; I'd need a reed to do that. Well, here's a reed, she said, Go ahead and play it.

I moistened the reed in my mouth for a minute — it was a new one — and carefully fitted it to the oboe, fingered what I thought would be a G in the first, easy octave, and made a terrible squawk. Oh, the lady said, That's what it sounds like.

Well, not quite, I said, and continued to experiment a little. G, A, B. G, F, E. After a while I managed to play a scale, and continued up into the next octave a little way. I was surprised I could almost seem to play the thing.

That must be your wife, the lady said; and I swabbed out the oboe, took it apart, and put it back in its case. How much, I asked. Oh, said the lady, I think I could let it go for seven hundred fifty.

Too much, I said as much to myself as to her, and left to rejoin Lindsey and Giovanna. 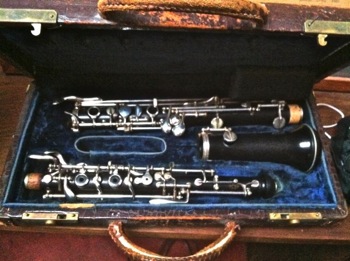 FOR A FEW YEARS afterward, every month or two, if we happened to be walking past a music shop, I'd say to Lindsey I think I'll just step in here and see if they have an oboe I can afford. You'd better not, she'd always say: but I generally did. They never did, of course. You can't buy a decent oboe for less that a thousand bucks, and then you don't know what you're getting.

Then, last summer, I took the plunge and rented an oboe to see if in fact I really wanted one. I played scales; I played simple tunes; I made up simple tunes, always practicing, if you can call it that, when Lindsey was out of the house, aware the sounds were pretty painful to hear. At one point I decided to take a lesson.

The teacher looked at me dubiously: a man in his late seventies taking up the oboe. Can you make a sound with that thing, he wanted to know. I looked at him with a little bit of contempt, I'm afraid, and fitted the reed, and played a two-octave C-major scale.

Can you play it in tune, he asked next, trumping my contempt with a finer because more justified attitude of his own. No, I had to respond; but I can try to do better. But the cheap plastic oboe I'd rented was not much fun to play, and I was always fearful: if I crack it, or break it, it's going to cost me a lot of money, at least twelve hundred bucks, and I'll have this cheap plastic thing on my hands. My thoughts went back to the music shops.

Then, last Thanksgiving, when we were visiting Giovanna up in Portland, I took a look on Ebay and there was an oboe, as is, nearing the end of its auction period, with hardly a bid on it. It was a wood oboe, grenadilla to judge by the photos; the key mechanism seemed intact, and it was nestling in a battered leather-covered case that reminded me of the Linton bassoon-case I'd carried back and forth to school all those decades ago. I took the plunge, and was surprised, pleased, and a little ashamed and embarrassed when I won it, for only a couple of hundred dollars.

When it arrived it looked fine, just like the photos, but was of course unplayable: the pads covering the tone-holes nearest the reed all leaked. Nothing for it but take it into town to the repair shop, hoping for the best. It was early December, and I wouldn't know anything for weeks: the only local woodwind repairman was busy with all the fixes needed for local Messiahs and Nutcrackers and carolers. I tried to put it all out of my mind.

Then, day before yesterday, while we were on a hike in the hills near Sonoma, my iPhone rang: the oboe was ready for me. The remainder of the hike grew both easier and more tedious; I could hardly wait — to see what I had, and to learn what the price tag would be.

He'd had to replace nearly every pad. Made of leather, they're a favorite food of a common household insect. (I've learned they also like the horsehair on violin bows: you have to keep these things in the light, just like a woolen sweater, if you don't want them eaten away.) He'd also cleaned out all the keywork, whose bearings had gummed up over the years. No telling when it was last played. His work cost a little more than the oboe itself had: but for a relatively modest amount I had a fine, solid oboe, much more responsive than the plastic thing I'd been renting, more rewarding to play — and my own.

Now of course I have to play it, every day or nearly so, to justify the expenditure. I reason this will be good for me, physically, firming my breath control and of course my lips, exercising my fingers and wrists beyond the familiar constraints of the computer keyboard. Perhaps even training my ears to adjust to equal temperament as I learn to shade each of the thirty or so notes I'll be playing, each requiring a slightly different approach with fingers, lips, and throat to bring the oboe's instinctive sweet natural tuning into the one-interval-fits-all attitude that's constrained "classical" music for the last three hundred years.

It already has me thinking about music, and listening to it, with renewed ears. Last night, for example, we went to a high-school concert of chamber music. Students of varying degrees of competence played jazz, chamber music, wind transcriptions of varying degrees of competence. Perhaps because this was in Berkeley, it all seemed extraordinarily democratic, leveled. "Classical" music was dragged down from its pedestal; vernacular music was nudged out of the cashbox.

Four ambitious girls tackled the first movement of Schubert's "Death and the Maiden" quartet, and showed me for perhaps the first time just how dangerous and exciting the development section of a sonata-allegro movement is, with passages careering through remote keys, like an enormous cruise ship coasting too close the hidden reefs.

Another quartet, dressed in leather and hiding behind very dark glasses, stalked onstage carrying saxophones, acknowledged the audience with a bit of defiance, and proceeded to a stately, respectful rendition of Bach's "Air for the G-String."

We all too often experience music only through performances by professionals. Amateurs, even beginning students, when they play for us, remind us of the difficulties, the complexities, the intricacies of musical ensembles. Music of any culture fills a societal need, investigating co-operation, sensitivity, awareness of others while concentrating on one's own task, juggling understanding of received cultural inheritance with the "values" and imperatives of the cultural present.

Even my solitary exploration of my oboe enlarges my engagement with the other-than-me, as my brain and my breath and my fingers work the mechanics, the ratios, the sounds, trying to find a way to make the tone even, in tune, pleasing — in a word, just.
Posted by Charles Shere at 8:10 PM

Very nice post, enjoyed reading it a lot. Hope you continue to enjoy your oboe adventures!

And here I thought you were bereft!

Denying that you had any instrument at all!

Keep practicing, and that day when (or if?) we meet, I'll expect a command performance--just to prove how the amateur(ish) attempt is as valuable as you allege.

Oh, I'll keep at it; I've put too much money into it to let it drop. But don't expect to hear the results: this is strictly a private affair; only my long-suffering wife will hear, and she can't be forced to testify.