The pleasure of walking


ON SATURDAY NEXT — in only two days now! — I'm joining more than a hundred other walkers on a twenty-odd mile walk at the northern Sonoma coast, part of the bicentennial observations of the Russian colony at Fort Ross. It will be a curious departure from my normal walking style, which has never in the past involved more than three or four companions, has virtually always been in Europe, and, with one exception, has been more genteel than strenuous, more stroll than hike, usually only a few miles from one B&B or hotel to the next.

(The exception was the great walk across the French Alps, from Evian to Nice, the subject of my book Walking the French Alps (now available also as an e-Book) and the blog Alpwalk: this was a strenuous month-long hike of several hundred miles; I hope to repeat it next summer.)

Since we've hardly walked since early March, when we did eighty miles or so in Belgium and Luxembourg, I started getting in shape last Saturday, when I walked home from the farm market in Healdsburg. Wouldn't you know: I pulled up lame, and had to call the sag wagon hardly half a mile from home — the trick knee was killing me.

Monday, though, I walked five miles to the neighboring town of Forestville; and then after a leisurely lunch with friends walked the five miles back. I wore the old reliable Ace elastic bandage on the offending knee, and had no problems. And yesterday my daughter T. joined me on a longer outing, fourteen and a half miles, from Forestville along a county trail, paved in asphalt, south through Graton to Sebastopol, then east to Santa Rosa.

I've been using MotionX-GPS to track these walks — a free application that runs on the iPhone, constantly checking its location against whatever GPS satellites it can "see," recording the results, then returning the statistics: length, elevation change, speed. I'm not obsessive about this; I haven't taken advantage of a number of bells and whistles — adding photos, for example, or naming waypoints, or looking into the Facebook integration. I do e-mail the MotionX results to myself, so that I can look up these "tracks" on the MotionX website, whence you can even download the saved GPS waypoints to Google Earth and thereby revisit the walks in their geographical context.

(You can look at these websites too, but only for six months, after which they're taken down. Yesterday's Forestville-Santa Rosa walk is here.)

Walking is one of my greatest enthusiasms. For years I bicycled, and of course for years we've taken various kinds of car trips. In March we drove across France in three or four days; in April we drove to Pasadena and back, visiting wildflower areas and a few of the California Missions; just a week or two ago we drove up to Portland and back, a thousand miles, in only a few days. Cycling and driving have their virtues. (So do trains, for that matter.)

But walking — now there's the way to experience terrain; and cultural geography too. Because of the recent, uncharacteristically late rains, and because our trail took us along Atascadero Creek and a number of bogs and then into the great Laguna de Santa Rosa for a mile or so, the air was a little humid; under trees for the first four or five miles we heard birdsong; wildflowers peeped out at us from the trail margins, and the smells and the heavy air made me think of riverside walks we've taken in Netherlands. 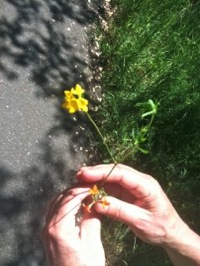 There's so much to see on a walk like this; so much to wonder about. What's that wildflower, for example, that sports both yellow and orange blossoms on a single plant? The leaves suggest some kind of pea, but what is it?

We often walked past fences guarding private yards and gardens; it's always surprising, the number of houses tucked away out of sight in these rural bedroom communities. In older sections — in north Sebastopol, for example, but in the run-down but charming Roseland area of Santa Rosa — old roses escape the gardens they've been planted in, sprawling among blackberries, climbing oaks.

We took a few nuts and some dried fruit; I had a slice of bread and some cheddar cheese in my lightweight daypack. We stopped in Sebastopol for a refreshing lemon sherbet —
gelato al limon; gelato al limon; gelato al limon…
and, a little further on, a macchiato; and then we turned our backs to the sun to walk easterly toward our destination in Santa Rosa, first across the bogs of the Laguna, then on a boring, straight stretch — nearly all this trail is on abandoned railroad right-of-way — in full sun, and within easy earshot of a busy road.

Even here, though, there were visual surprises. That glorious live oak photographed at the top of this post, its lichen-covered branches energized by sunlight now lower in the late afternoon. Later, as we enter the city of Santa Rosa, industrial outskirts: an abandoned gravel depot, its fascinating, forbidden machinery beckoning to the little boy still alert in a man nearing eighty. A cherry tree hung over a high board fence off to the right, the fruit still a week from perfection but for that reason unmolested by the birds: surely a handful won't give me a stomach-ache!

At the end of the walk the knees complain a bit when we sit at a sidewalk café to wait for our pickups; and at the end of the day I'm hungry and thirsty. This morning I feel great; no knee problems at all, though in truth I'm just a little stiff — and I lost two or three pounds yesterday, in spite of the quarts of water and glasses of wine I downed in the evening. We'll see how things to on the History Walk, day after tomorrow…
Posted by Charles Shere at 5:54 PM

Thanks for this...I look forward to reading about the Saturday walk. And now, off to take a walk!