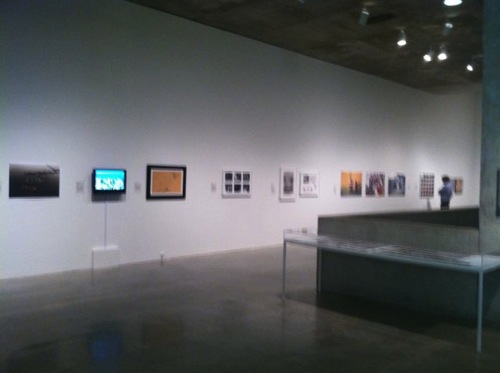 IF YOU REMEMBER the 1960s, the saying goes, you weren't there: I remember them, and I was. What I don't remember is a lot of the 1970s, and I think I know why: I was busy. This blinding revelation occurred to me today on the top floor of the UC Berkeley Art Museum. We'd reached it the slow methodical way, walking up the ramps, working our way through a show called State of Mind: New California Art circa 1970, part of Pacific Standard Time, a multi-museum exhibition investigating (mostly) conceptual and documentary art made in California in the neighborhood of 1970.

I was more or less active as an art critic at the time, first for KQED television, later for the Oakland Tribune, and in the course of work I rubbed up against these conceptualists quite often. They were of course only one part of what I had to deal with; it wasn't always easy to convince the boss conceptual art was important. Or legitimate, even, for that matter; the lingering suspicion that it was rife with fraud and foolishness was pervasive in editorial offices. A clipping of a column by the old San Francisco Examiner art critic Alexander Fried, documenting the important Berkeley group Sam's Cafe, shows that even the critics had their doubts.

And truth to tell I think it wasn't only because of Conceptualism's marginality within the establishment press that I spent relatively little time on it. The tendency of Conceptualism, of all the versions of "process art" that were contending in those years — earth art, body art, documentation art, and various sorts of politically motivated exercise — their tendency to drown in the photographs and videos and paragraphs and pamphlets they themselves spawned and spun out — that tendency was offputting. I used to complain about critics who complained when artists did things that seemed to them, the critics, more like criticism than art, as if the critics' own territory was being impinged upon; but I see now that I felt exactly the same way, and the irritation I directed at my colleagues (and competitors) was in fact irritation with myself.

I still believe that the value in this movement, and it was a considerable value indeed, lay in its message that art lay in the doing, including in the idea of the doing; not in the discussion. Even such clearly visual art as Edward Ruscha's books of photographs — All the Buildings on the Sunset Strip, for example, which is triumphantly displayed in this exhibition — I can't help being more impressed, seized, with the thought of the photographer moving his equipment, taking up these positions, waiting for the right moment, than I am with the photographic results. Looking at Vermeer's Milkmaid, or for that matter witnessing a production of Einstein on the Beach, I'm aware of course of the monumental effort that went into the production: but I am seized with the magnificence of the result, with its depth and complexity and resolution, with its presence; and all this is involved in, and itself involves, a corporeality which (as I understand it) was precisely the aspect of art the Conceptualists were thought to be denying.

It was of course enjoyable to reminisce, wandering through these galleries. We'd prepared for it by starting downstairs in a small exhibition of hundreds, perhaps thousands of everyday things sent to the collector Robert Warner by the Correspondance Artist Ray Johnson; a great testimony to Johnson's compulsive submersion of any self-realized significance of his own genius in the jetsam of his urban and social environment, a sort of democratization and Americanization of the urges that had motivated Joseph Cornell and Kurt Schwitters. And a vicious illustration of Thoreau's observation:

Things are in the saddle, and ride mankind

State of Mind, the installation, is to the museum visitor as Ray Johnson's collectings were to Robert Warner, I think: overwhelming accumulations of texts and images produced and gathered by an insistent artistic methodology, at once intent on expression and suspicious of, cynical about the very existence of anything like "expression." And as the visual record of this movement gathers to make its curatorial point — leaving aside the artists' intentions, which are inevitably confused by the circles of recursiveness the curators and critics weave around them — as that record gathers, it inevitably produces a sort of meta-Conceptualism. To spend much time contemplating this in any serious way, to bring intellectual contemplation and analysis to it, leads to madness.

No wonder I spent the 1970s largely ignoring all this. I saw it, knew about it, enjoyed much of it, even fiddled with it myself, noting down ideas for impossible or dangerous sculptures, for projects linking Bay Area summits, for quartets in which the musicians imitate members of the audience, who will inevitably catch on and begin imitating the musicians, and so on. 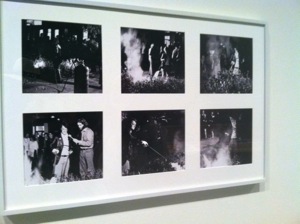 And then Lindsey, who'd been inspecting all this somewhat more attentively than I had, called out: Charles! Did you see this?

She was looking at six black-and-white photographs documenting Terry Fox's Defoliation, a work he did in 1970 for the opening of a conceptualist group show at the University Art Gallery in its lovely old Steam Room days before the present Museum was built; a piece involving his burning a design in a planting outside the gallery.

There in the photo at the lower left was a familiar figure holding a microphone to Terry's face. I was at KQED at the time, producing a show called Culture Gulch, a roundup of the arts as they were going on in the Bay Area in those days — a half-hour weekly show involving reviews, interviews, conversations and performances in the television studio or visits to artist's studios and pubic venues. Amazing, what we could do in those days; sad, that there is no physical record… 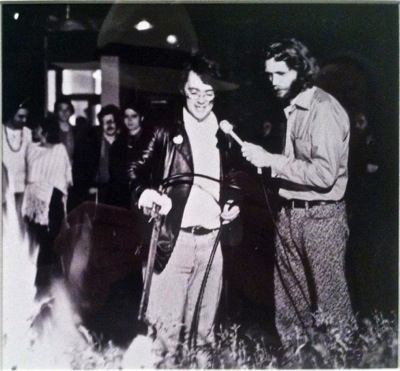 Oops. I just fell into my own trap, didn't I? Anyhow, there's the late Terry Fox, I think perhaps as principled and pointed a Conceptualist as any of them, who intuitively understood the degrees of irony attendant on his work, his kind of art; he's gleefully concentrating on the destructive beauty and the physical enjoyment of directing his torch against that foliage; there's the Charles Shere of forty-two years ago, equally rapt at the flames and their work and meaning.

Thinking back on all this, I realize that the very marginality of my own journalistic work of those years has some resonance with Conceptualism, and with my own conflicted responses to it (and the antecedent of the word "it," here, is deliberately left ambiguous). My work for the Tribune was little read or noticed, fugitive as fishwrap. And in those days television work was similarly fugitive: no DVDs, not even videotape yet, and of what may have happened to the old film stock I have no idea at all. (Somewhere I still have a number of 35mm transparencies, and a film interview with Georgia O'Keeffe. I think.)

As Chebutykin says: What difference does it make. A question capable of being taken in more ways than one. This way madness lies. Madness, and perhaps enlightenment.