A Time in Rome 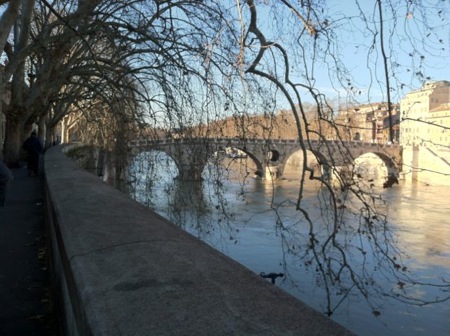 NOT LONG AGO we spent two weeks in Rome, first a few days with one couple of old friends, then ten days with another, finally a weekend with a third. I meant to write more about the visit, but in the end only came up with three posts, two on street performers, another on Shostakovich's opera Nose.

I may revisit that visit. Looking at the dozens of photos, many impressions come back to mind. Of course many are old friends of impressions, by now; this was our third extended visit to the city, and previous impressions were written up at the time — January and November, 2004 — and subsequently found their way into my book Roman Letters.*

My way of visiting Rome is essentially irresponsible and self-indulgent. We've avoided most of the museums and failed to explore the Vatican. Of course we've been to the major sites, and return to some regularly: I wouldn't visit Rome for a day without stopping in at San Giorgio in Velabro, for example, or crossing the Ponte Sisto into Trastevere. But on the whole we prefer trams to tourguides, back streets to boutiques, cafés to cathedrals.

The perfect illustration of this attitude, and these preferences, jumps out at me in this week's reading. I'm still bogged down in Robert Hughes's history Rome; I may never finish it, and will write about it later, if ever. But I just finished Elizabeth Bowen's marvelous A Time in Rome (New York: Alfred A. Knopf, 1960), and can't wait to share it with you.

It is neither guidebook nor history. It's a meditation on Rome, by a gifted observer and writer spending three months there, mid-January to mid-April, mid-20th century. There are extended passages descriptive of streets, quarters: the Forum of course; the via Giulia; the cemeteries. At other times a paragraph or two will be enough to suggest Testaccio, say, or Ostia Antica, or what she still refers to as "1942," Mussolini's architectural fantasy projected for an international exposition, now known as EUR.

There are lengthy explorations of historical periods and the personalities behind them: the Julio-Claudian emperors and then the Flavians; Benvenuto Cellini; Pope Sistus V; a contemplation of Augustus's wife Livia; a detailed account of the end of St. Paul's career.

There are wonderful little insights, often witty in their expression: On political correctness, evidently as irritating mid-century as now:


I am sick of the governessy attitude of our age, which is coming to be more genuinely presumptuous, nosier, and more busybody than the Victorian. Deplore the past if you wish; you cannot do anything about it, other than try to see it does not recur.


or poetic: the description of a


great ripe Sicilian blood orange … in a class by itself: the peel, mottled satin outside, white velvet in, curls away under digs from the thumbs, gladly; the delicate-membraned sections fall asunder like petals, firm flesh not spilling one drop of crimson juice till one bites into them. Such oranges deserve to be eaten as I ate them, in infiltrated sunshine, with wine to finish.


Often of course she contemplates Art. On ancient wall-paintings, for example, like those at Pompeii and Herculaneum (though she does not write about those sites):


Nothing about these paintings, minute and sensuous, releases one into the air of art: if anything, their effect might be claustrophobic. The aim was not to enlarge existence but to flatter it.

Later she touches again on the ineffable enlargement of existence art can engender:

While I stand and regard it, the indifference to myself shown by a work of art in itself is art. In Rome, I was more drawn to statues than to paintings. But, whether it was a statue or a painting, I came to recognize first a disturbance and then a lessening of the confusion within me as I beheld. Partly there was a liberation from the thicket of the self…


She doesn't flinch from facing the difficulty of writing about Rome:

or about the fugitive essence of much of its population — especially its ancient population:

'Average' existences, at whatever level, are probably the hardest to conceive of, when they are other than one's own.

Yet some of her most fascinating insight is trained on the underclasses of ancient Rome: slaves, mechanics, women.

She writes about her approach to a description of the Forum:


My route, I have so far found, does not correspond with any recommended by an authority… Mine corresponds with my sense of order: the taking of things as one comes to them, one by one, placing them by their relation to one another. My approach to the Forum was visual rather than historic — even though 'seeing,' the greater part of the time, had to be an act of the mind's eye (or better, that of directed imagination.

and reveals thereby her greater intention: to direct that mind's eye (a particularly penetrating one, I think) to the entire scope of Rome, spatial and temporal, enlarging the reader's existence through her art, not with mere factual information but with gentle encouragement to the reader's own mediations.

Writing about Rome, she necessarily mediates on time and memory:


I wanted to establish the Forum monuments' nearness to or distance from one another in time as well as in space. Clearly some are the seniors, other he juniors. Many of them were one another's contemporaries — for how long, and when, did they share the same term of time?


We are drawn to Rome and its past because, unlike the past we studied as children in history class, fixed with precise dates and determined by sequence and succession, the Roman past attested by its living ruins is a continuum. Wars, assassinations, births, and treaties are momentary affairs, however long the moment may be: but the past that is Ancient Rome encompasses a thousand years; where the Coliseum was built in Hadrian's day (CHECK THAT), and stands still today, swans floated on Nero's lake a century or so earlier.

In the face of such contemplation a certain elegiac note is hard to evade.


The Forum, I said, leaves one with little to say — I could have as easily said, with nothing. Silence seems the only possible comment on finality. I do not think you or I feel less, but we feel, because more resignedly, more calmly.

(One thinks of Wittgenstein: "Of that we cannot speak, we must be silent.")
Though certainly not intending to write a History of Rome, she is mindful of her responsibility to History:


One must be on guard against misconceptions, when trying to grasp the movement of the history of Rome — untruths are thieves, robbing us of a birthright.


Yet she is willing to abstract, to generalize, to interpret; often through the novelist's method of construction from observation. She recalls an April in 1939, when she was enjoying an afternoon on the Palatine:


The idle yet intense air smelled of honey; Rome shimmered below with hardly a stir, and bluer than the sky were the Alban hills. There was a harmony between the distances. I was sitting on a broken ridge, reading and sometimes not reading a book. Low but clear voices, coming across the irises, told me that a couple who had been wandering ad set down behind me — students, by their serious young tones; friendly lovers or loving friends, familiar with one another as with the Palatine. If not born Romans, they had acclimatized. They talked metaphysics, for whose discussion the lucid Italian language is so perfectly framed. 'This beautiful house of sensation in which we live…' he said.

('Questa bella casa di sensazione in qualie viviamo…') The words made me their neighbour: I looked round, to see, stamped on the air, his profile intently turned, her full face abstract and calm with thought. Since, what has become of him? I must not forget him. Killed in the war against us? (Soon after that April, the war came.) If he still lives, I hope he still finds the house fair. It is still here. Is there so great a gap between the pure in sense and the pure in heart?It is a haunting book, A Time in Rome, and I'm grateful to Giovanna for directing me to it.

__________
* Roman Letters: available at Lulu Press as a paperback or an e-book; it is also available at the iTunes bookstore.
Posted by Charles Shere at 12:46 AM