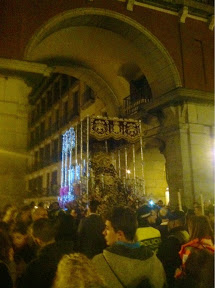 BACK DOWN TO THE CENTER of town last night, about eight o'clock, to find the streets devoid of automobiles and given over instead to throngs of Madrileños. One didn't know which way to go: from the Plaza de San Luis, some groups strode purposefully down toward the Puerta del Sol, others charged up the dubious Calle de Hortelleza; yet others moved off down the Gran Via toward the Plaza de España.

I think I've never seen so many people massed in streets, all clearly about some very public matter, but none in groups of more than would constitute an immediate family. Parents and children; young couples; grandparents with extended families; sometimes two couples, clearly friends: all went about their ways, purposeful and often intent, but free of any collective partisan or political issue. They weren't demonstrators, or pickets, or even football fans.

If it reminded me of anything, it was the passeggiata you see in Italian cities in the hour or two before dinner on a fine Sunday evening. But this was Madrid, and Thursday, and not particularly fine: in fact, rain had been threatening, and the air was damp as well as cool.

We joined those continuing down the Gran Via but soon veered south toward the Plaza Mayor. The crowds grew thicker. It was Holy Thursday, and four processions were scheduled through the city streets; one would proceed right through the Plaza Mayor, and we didn't want to miss it.

We took up a station at a likely-looking corner of the plaza where the crowd had left a wide pathway open for the procession, whenever it should appear. There were no monitors, few police, no barricades. No one had folding chairs. We all stood fairly silently, some conversing, one woman in front of us quietly talking to someone at another position on the route, keeping track of where the procession might be.

Walking, all seemed to sway slightly from side to side. Standing, they were still, looking straight ahead, expressionless — or, rather, expressive of profound sobriety and dignity. We couldn't help but feel moved.

At length a great golden altar arrived, borne along by forty-eight men, eight on each of the three poles fore and aft. The figure of a black-garbed Virgin stood atop the float, which halted just in front of us. Men lit the many candles along the sides, further heightening the gleaming apparition against the prevailingly dark night — for there was little light in the Plaza, only a few lamps at the distant side.

The gold altar was finally lifted again and carried through the arch. After a time another huge float was carried in, paused, and then was carried out; you see it photographed, as well as I could do it, above.

Finally the procession was completely past us. Eleven o'clock: we had been standing in one spot for three hours. People nodded to one another, murmured goodnight, and drifted out of the plaza; voices gre more normal as we entered the surrounding shopping streets; the passeggiata resumed.There is more secular street entertainment to be found, but all of it reminds me of vignettes familiar from Goya and, later, Picasso. There is of course the occasional beggar, but much rarer than in Venice, for example, or, for that matter, San Francisco.

There's the occasional street musician: a lone accordionist or violinist — occasionally, these days, unfortunately accompanying himself (he is inevitably male) with a boom-box. I prefer them when they play unaccompanied. Now and then there'll be one with very little talent, surprisingly little, but you have to give them grudging credit for at least trying. More often they're pretty good; now and then there's one who's really good, and you feel he may be playing for himself, because he's a musician and can't help it, though the case will be open on the pavement, for whatever thanks may fall into it.

Then at some of the handsome plazas on the Paseo Castillana, when automobile traffic is stopped for a minute or two by the traffic lights, jugglers will run out into the middle of the street, often wearing amusingly colorful clothes; they'll bow or curtsy (for some of these are women), tip their hats, and begin juggling their Indian clubs, throwing them high in the air, picking up the occasional fallen one daintily with an instep and kicking it back into action.

Somehow they know just when to stop, and walk between the lanes of traffic, clubs in one hand, cap in the other; and I'm glad to report a number of windows are opened, and coins dropped into the caps.

We don't contribute. There seems to be a convention at work here: it's car and taxi passengers whose money is sought, perhaps to atone for their vehicular presence. Returned to the sidewalk while thee traffic lights are green, thee jugglers talk among themselves, and smile at us pedestrians and say Good Afternoon, friendly and polite. We feel conspiratorial; there's a bond among us.My own entertainment on Good Friday was, wouldn't you know, a broken tooth. Nothing to be done but ask the desk clerk where the nearest emergency dentist might be found.

As luck would have it, only a few blocks away, a Clinica Dentista in a white building on Calle Breton de Herramentos. I telephoned and made an appointment for eleven-thirty. I was a little early; his bell didn't answer. Right on the second, though, there he came a shaggy-haired man in his early thirties. He looked at me questioningly; I nodded; he beckoned me to follow.

He put a white coat on over his street clothes and, I noticed, changed his black shoes for a pair of white ones. I took my seat in his dentist's chair and watched him meticulously wash his hands before drawing on gloves. He spoke no English, and my Spanish is barely rudimentary, but both problem and solution were pretty obvious, and soon he'd put things right.

I told him not to run, as he dashed between the operating room and the counter serving as his office, but he pointed at the clock, and said there'd be three more patients arriving at noon. I liked him, his work, and his manner. The operation was not cheap: the handsome jacket I'd been thinking of splurging on was now moot. But it's nice to have my tooth back, and the experience was, well, interesting. 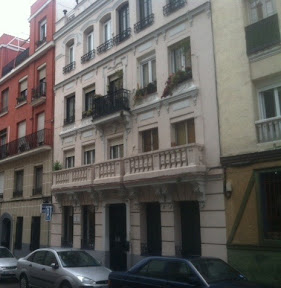 Posted by Charles Shere at 8:29 AM