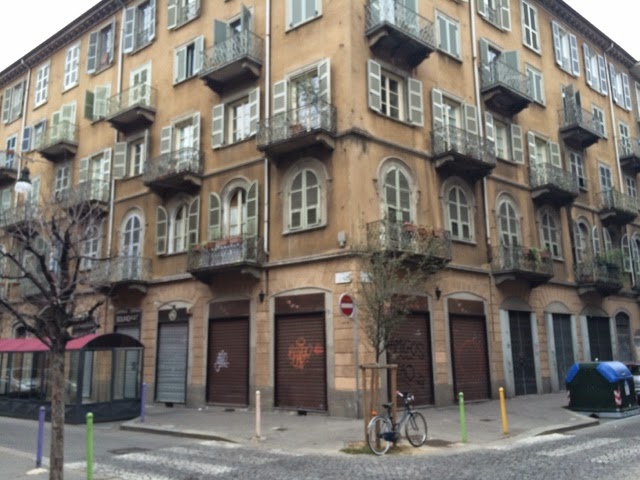 our building, Via Principe Tommaso

WE CAME HERE to Torino to atttend the Salone del Gusto, an international fair celebrating food and its producers, specifically those embracing the qualities famously statedd by Carlo Petrini, the founder of the Slow Food movement:

Petrini is from Piemonte, as was my father-in-law; and Torino is the capital of Piemonte and one of Italy's biggest cities.  We have spent four days wandering through the Salone, and we determined to take today off. I'll write about the Salone later — it's fascinating, and we attended two notable conferences there; there's much to write about. But tonight I want to write a bit about Torino.

It's not what you think an Italian city is. It's always struck me as being a bit reserved. We spent a pleasant hour with our host in a neighborhood bar discussing the possible reasons for this, and much of the following will be a paraphrase of his comments.

The city was founded by Julius Caesar, a long time ago, as a camp and a headquarters for his campaigns in both the neighboring territory and, further, the definitive settlement of Provence and the campaigns into Gaul. The original camp left its rectilinear layout to the old city, which lost its importance in the dark ages, when neighboring more prosperous towns shouldered it aside: Asti, Monferrato, Saluzzo.

In the 16th century, I think it was, certainly by the 17th, it began to regain some importance as a capital of the emerging kingdom of Savoia: but it remained small and relatively isolated, even from such nearby (by modern standards) cities as Milan. It is a mountain town, Marco went on; it's always addressed the mountains, even though it is on the Po.

After the French Revolution, and during the Napoleonic times (which in Italy extended toward the middle of the 19th century) the city began to enjoy some considerable importance, and grew considerably in size. We are staying in one of the suburbs of that time, San Salvario, say a hundred or so blocks lying to the southeast of the main railroad station.

Marco contributed to a fascinating guidebook, L'altra Torino: 24 centri fuori dal centro (The Other Torino: 24 centers outside the center), which we took with us today on our casual walking tour. It describes much of the history I've outlined, and points out the first Waldensian (Protestant) church, the hotel whose bas-reliefs portray the pretty young working girls of the quarter in the time of gaslight, the building that housed the Fiat offices, Natalia Ginzburg's birthplace — things like that.

I like its offbeat interests, effectively lightening its serious purpose. Marco is a young man, but a Piemontese, after all: he understands the beauty, the necessity, and the purpose of the past as it relates to the present.

That's an essential component of the Torinese character, I think. Lord knows things are up-to-date. The Metro is like a fast sleek horizontal elevator: the tracks are completely enclosed under glass; doors open quietly and effortlessly when the train glides into the spacious, well-lit station; you feel like you're entering a hotel lobby, not a grubby train, when you step inbto the carriage — though it may well be crowded, especially if you're on your way to the Salone.

We had a number of pleasant conversations today. At Franky's bar, near the train station, where we stopped for a cappuccino because we wanted the wi-fi, we were pleasantly asked where we were from, and given a little treat — a delicious filled cookie, in fact — when we turned out to be from as far away as California. This of course led to conversation about pastry, which is so good in Torino in general, and seemed exceptionally good here — my croissant was flaky and delicaely rich, very Parisian in the best sense. The pastry-cook spoke no English, but beamed at meeting Lindsey and enjoyed our enjoyment of his work.

Later in the day we had a substantial conversation with a woman met in a pubic market, where an afternoon contest had been organized in which ordinary people, from Torino and nearby villages, stood behind their very best bagna verde, green sauce. This is made of parsely, garlic, anchovy, and oil, with perhaps other things thrown in; it is made very carefully, with great attention to balance, and is then spread discreetly on, for example, boiled meat.

The young woman apologized that she wasn't really Torinese herself; her father was from Abruzzo and her mother was Roman; she was from Lazio; but she'd settled in Torino because she liked its intellecttual, language-conscious, literary, prudent atmosphere. She was fluent in German, French, and English, and seemed a little ashamed and maybe surprised that she didn't speak Piemontese, the local dialect as they call it — in fact, I think it is more a language of its own, closely related to Occitan.

We are staying in an Airbnb apartment, and I recommend it, in spite off its 96 steps' removal from the street. It is sober and quiet here, three blocks away from the busy Via Nizza.  It is quiet enough now, in fact, half-past-nine, that I think I'll stop here, get my papers in order, and begin to pack. Tomorrow we return to the Salone for a last day; then rent a car and drive to the country, to a very different venue. I hope from now on to have a little time to write like this, and I hope you find something to enjoy in the result…

Posted by Charles Shere at 1:37 PM