The Death of Discourse 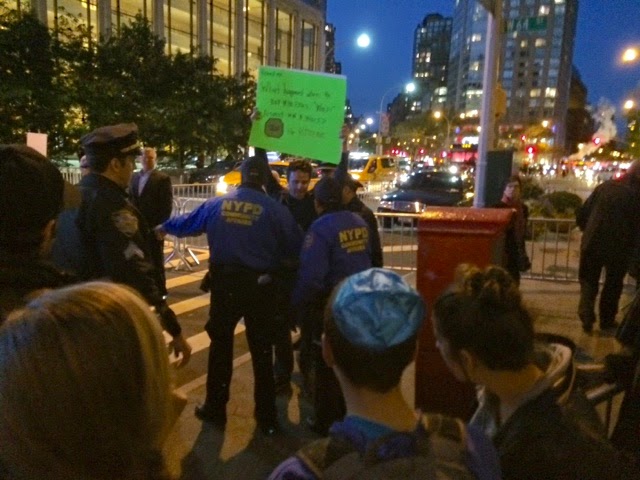 New York City, October 21, 2014—
UPWARDS OF A THOUSAND people, I'd say, jammed themselves into a small triangular patch separating the automobile access to the Lincoln Center from Broadway, which itself was at a standstill with taxicabs, emergency vehicles, and police cruisers. It was a little before seven p.m., and the opening performance of a run of John Adams' opera The Death of Klinghoffer was set to begin in a little over an hour.
The opera is based on the 1985 hijacking of a cruise ship, the Achille Lauro, by the PLO, during which an American passenger, Leon Klinghoffer, was murdered in his wheelchair. Set to a libretto by Alice Goodman, the opera, conceived by the director Peter Sellars, premiered in Brussels in 1991, and has been produced a number of times since, often to protests, largely from Jewish groups.
The history and content of both the opera and its protests are well covered on Wikipedia; I won't recapitulate that here. I saw the opera in San Francisco in 1992 and wasn't eager to see it again last night; we're here only two days, en route to Italy. But we did walk past the demonstration on our way to a restaurant we've long wanted to sample, and I talked briefly to a lone dissident from the general mood of what seemed to me a restrained but noisy crowd of protestors.
He was young, well dressed, good-looking, earnest, and very much aware of danger. He wore a yarmulke, and held a hand-lettered sign above his head, apparently prepared in some haste; I never could quite comprehend it, though STOP THE HYSTERIA was bold enough to read at some distance."What hysteria does he mean," my friend wondered; "let's go find out," I replied.
The poor fellow was being harangued by two or three men who were asking him how he could shame his own people, denying the evils of the PLO and Arabs in general, when the Nazis had murdered six million Jews in the Holocaust; how he could permit the Metropolitan Opera to produce an anti-Semitic opera.
He countered that he agreed about the PLO but that it was wrong to generalize about the Palestinians, not to mention the Arabs, and that the opera was not anti-Semitic. "Have you seen the opera?" he asked, reasonably enough I thought. His hecklers said they would never see such a thing, reflecting the general attitude of the crowd was that it was anti-Semitic propaganda masquerading as "art".
A young woman was listening to all this, reporter's pad in hand, taking notes, trying to interview the man with the sign. I talked to her briefly, then told the man I agreed with him, as far as I can tell, and asked him if he felt himself in danger. He was aware of it, he replied.
I asked if he thought the protest was organized, either by a single group or a coalition, and if so who he thought it might be.
Look, he said, I don't know anything about that, probably a lot of groups are represented here, probably some groups I even belong to myself. But it's important to counter this kind of hysteria with truth and reason.
I asked if he'd seen the opera. Not  yet, he answered; I'm going later in the run. I have no opinion of the opera until I've seen it myself. I don't believe it has a political agenda.
At just that moment one of his earlier hecklers returned, approached him from behind, gave him a kick in the backside, then sidled away. I turned to see where Lindsey and my friend had got to and rejoined them, and the next thing I knew the poor fellow was being led away by a couple of uniformed cops, still holding his placard aloft, telling them he was going willingly, he was not resisting, he only wanted to express his opinions freely and peacefully.
He should be silenced, a man in front of me said. Let the police take care of it, his friend replied, with a smile.
Someone had set up a public-address system; a soprano wailed through The Star-Spangled Banner, and a recorded instrumental version of the Israeli national anthem followed. We felt our dinner reservation approaching, and walked on up Broadway.
Posted by Charles Shere at 5:37 AM

This is why a growing number of Jewish college students are protesting against the Hillel party line. http://www.thecrimson.com/article/2014/10/10/time-now-open-hillel/7515

Your piece reads like a New Yorker Talk of the Town casual.

I was left with a slightly non-specific sense of unrest, which is often how I feel when I've finished a NY'er casual.

I think people have every right to protest.

Jews have the same kind of doctrinaire reaction to presumed discrimination which African Americans often have, and LGBT folks as well.

I understand where they're coming from, but they do us no service by taking predictable "solidarity" positions. Keeping an open mind is more important than simply trying to shout things down.