Venice and the idea of permanence 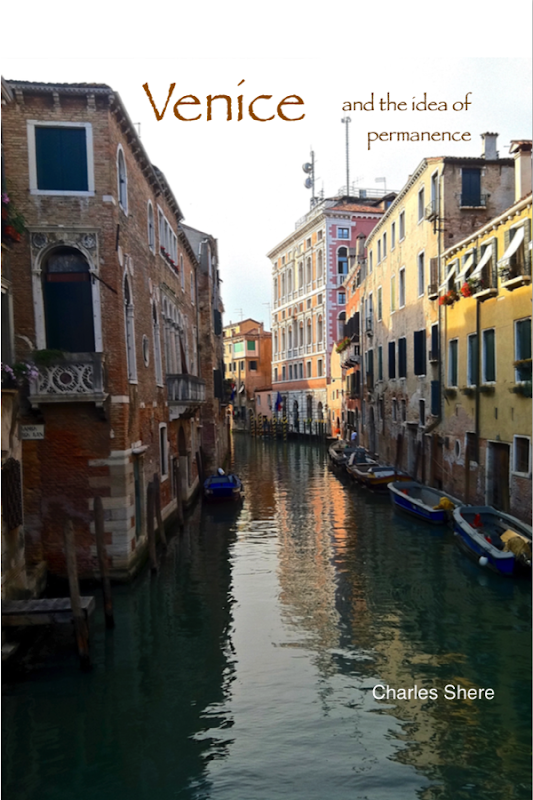 Eastside Road, March 19, 2015—
AS ALL THE WORLD must know by now, I hope, I have written a few books in my life, spurred at various times by small publishers (Fallen Leaf Press, Center for the Book) or, more insidiously, by some small hope of proving myself to my parents and grandparents, who had perhaps an exaggerated opinion of the value of books.

Of course that was a different time. Books were still regarded — I'm perfectly serious here — as having an aura of mysterious authority. Naturally it was known there were cheap or vulgar or even downright mendacious books, but even they contributed to the generally awed attitude toward books, for they were commercialized sinful things. Most books were honorable, appearing regularly in the mail from The Literary Guild or The Book-Of-The-Month Club, with covering pamphlets conveying an Authority's seriously considered and carefully expressed appreciation of the work.

As late as the early years of my own adulthood, in the late 1950s, The Reader's Subscription continued this tradition, bringing Finnegans Wake and Proust and such to our seventy-five-dollars-a-month duplex apartment. And much more recently, and to this day, the Library of America provides me with a two-volume Gertrude Stein, a convenient Wallace Stevens, the novels of Willa Cather and Henry James and Herman Melville.

My own contribution is not worth mentioning in this context, but if you think that's going to stop me, you're wrong. My publication history begins in 1995, after my retirement from journalism, when Berkeley's Fallen Leaf Press brought out Thinking Sound Music, my biography of the composer Robert Erickson, who had been my teacher years before. The next year the same house produced Everbest Ever, a slim jeu d'esprit containing correspondence between the composer Virgil Thomson and four Bay Area friends of his, mostly concerning mundane details of daily life and mutual visits.

I liked working with Fallen Leaf, whose products were nicely designed while indulging some of my own suggestions, and whose publisher, Ann Basart, was indulgent in the extreme of my eccentricities of prose style. In fact you could say she spoiled me: and this, together with intrinsic laziness, is why with one exception all my other titles have been self-published. (Regrettably, Fallen Leaf Press went out of business ten years ago or so, but those two books live on at Rowman & Littlefield.)

The most recent to appear is the one depicted here, Venice: and the idea of permanence, printed, like nine previous titles, at the online publishing company Lulu.com. For reasons some of which will be obvious, I think online self-publishing can transcend the conventional classification of "vanity press." I think it is, rather, an instance of a new corner of the capitalist economy, one merging artisanship, small business, niche market, and global technology, and facilitating an individual producer's seeing his work through the various steps of creation, production, and even distribution according to his own taste and values.

For example : I like a little space before a full colon, as you have just seen. I even like it before semi-colons. And I like a double space, or a space and a half, after full stops. I just think a printed page is more easily read with such spaces : and designing my own book makes it possible for me to insist on this practice, which, I think, no commercial publisher would countenance.

But that's only one reason for my self-publishing habit. Years writing for a newspaper — and in those days that meant writing thousands of words a week — formed the habit of considering experience through a linkage of fingertips and the mind and memory. I enjoy so many aspects of daily life — admittedly not shrinking from enhancing daily life with good food and drink, with travel, with reading, conversation, and the contemplation of art — but I enjoy them more fully when I consider them.

Early in the Internet Age, when e-mail became generally available, I began to share these considerations and contemplations with a few friends who seemed to enjoy reading them. By the time of our first month-long stay in Venice, in the summer of 2001, the list had grown to over a hundred, and hotel Internet providers had begun to suspect me, limiting the number I could send these "travel dispatches" to. But many of my readers, though they could deal with e-mail for some reason, resisted subscribing to a blog : and anyhow the blog itself had begun to develop associations with vanity. (Since then, of course, it has attained a more honorable state.)

Enter Lulu.com and the idea of online publishing. The present subject, Venice : and the idea of permanence records impressions gathered during two month-long stays in La Serenissima, in June 2001 and May 2011. I was curious to see how my thinking, my observation, and Venice herself may have changed in the lapse of those ten years, but I certainly wan't about to apply literary criticism to myself — why not just gather the original items in a single volume and let the reader, if one should happen to appear, come to his own conclusions?

So here it is. The cover's in color, as you see, but the interior photos are in black and white. There have been three previous similar gatherings, Roman Letters, Mostly Spain, and Improvised Itineraries, the last of which covers walking in the Low Countries and driving across France. (Another, Walking the French Alps, records a month-long hike from Lake Geneva to Nice.

I prepare these books on my desktop Macintosh, laying out the pages (and, separately, the covers) using Apple's "Pages" word-processor, converting the results to .pdf files, and uploading them to Lulu. They take over from there. I suppose each book takes me a month or so of work (apart from the writing), a few hours at a time — and, since I'm by nature careless, a number of trial printings. I set the price myself — let me know if you think it too high! — in order to make a very modest profit from the sale of each copy. If I like the result, and I generally do, its simple presence on my bookshelf is reward enough.

If something displeases me in the final result, I have only myself to blame.

I have the sense, wholly anecdotal, that the world is tiring a bit of blogging.

When the tele-texting world began, I thought it about as silly as anything that had come down the techno-trail in quite a while. The kids seemed to devour it with enthusiasm. I even lost my fishing buddy (20 years my junior) to it--who seemed so preoccupied by it that he could barely stand to be "unhooked" for even an hour of time on vacation. My complaints about it killed our friendship.

As you must know, I also have used "vanity" publication. I even made a case for it here (http://compassrosebooks.blogspot.com/2012/04/vanity-saith-preacher-vanity_4155.html).

In the last decade, people have begun using blogging as a kind of "advance" publication venue, composing and testing their work on a blog. Doing a blog is very much like writing journalism. Its instantaneous production is so efficient as to make ordinary "news" almost passé by comparison. For anyone who habitually enjoys writing, it's a facility made in heaven.

Despite this, literacy is down in some quarters, and while the material text may endure, the ease of "chattering" is making a new generation of hybrid nitwits.

I look forward to many more of your blogs, Charles. Having read your blogs during your last trip to Venice, I suspect I've already consumed the contents of your new Venice book. Correct me if I'm wrong.

Venice's days may be numbered. If the South ice-cap melts as fast as it has been, in the next hundred years or so, Venice will be underwater--a fate anticipated and perhaps, miserably, fulfilled.

But it was always Venice's decay that was its decadent attraction. The fleeting charm of the aging courtesan.

Do you know Anthony Hecht's poems about Venice?

Many thanks, Curtis. In fact the most recent trip to Venice is less than half the book, so you might be interested in the book. I hope so. As to the numbering of Venice's days, well, yes, all bets are now off; no one under 60 invests in Miami real estate, and Venice is likely as fugitive as — well, more fugitive than Papyrus. But as long as the world itself survives there will be aging courtesans.