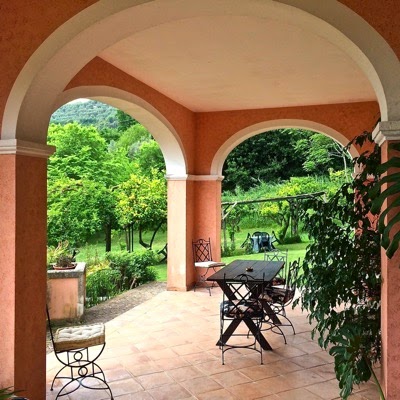 Metaponto, Basilicata, May 15, 2015—
YOU MAY HAVE NOTICED, constant reader, if you’re there, that there was until today no chapter five in this series of travel dispatches from Italy. I had intended to write it four days ago, on the subject of Churches and Castles; but one thing and another. Not to bore you with excuses.

(I had intended a Chapter Seven, as well, on the subject of Flâner; and that too has gone by the wayside, though it will doubtless emerge when I least expect it.)

So, as Lucky says in Beckett’s indispensable play, I resume. We have spent the last three days driving from one place to the next, settling for the night in an agriturismo, eating dinner, sleeping, and then recapitulating the next day. This has taken us from Napoli to, so far, Metaponto, on the northernmost point of the Gulf of Taranto, the instep of the Italian boot.

The three chosen agriturismi have been quite different from one another, though all with two things in common: unforgettable, personable, helpful, truly sympathetic personnel; and settings close to the agricultural terrain. I begin, then with the first of these.

We first found the B&B La Vecchia Quercia in a travel article in, I believe, the New York Times , when we were touring around by car for a few days from Caserta to Erculaneo to Paestum to the Amalfi cost. We decided more or less impetuously, as we tend to do, to give it a try, and we found it delightful. The setting is quite a few kilometri off the beaten path, back up in the woods at the edge of a regional park, wooded and hilly, though still agricultural — in fact on the edge of an apparently important vignoble, Montevetrano. (I have yet to taste their wines: a tribute to the more ordinary house wines offered at this table.)

We were back day before yesterday, five years later almost to the day. The woman in charge, Anna Imparato, looked at me closely but apparently did not recognize me: but she remembered my companion instantly. And warmly.

We were shown to our room: large, comfortable, with its own little terrace, and adjoining the lawn under the lemon grove. Beyond the structure containing our suite and the adjacent one, much the same as I recall since we stayed in it five years ago, and containing also an apartment on an upper storey, there’s a stretch of garden dominated by an amazing old mulberry tree, certainly a meter in diameter at the base, the trunk hollowed out, but the canopy full and thriving.

Our view looks west over agricultural land, and truth to tell it is a workaday landscape, but everything here is so well tended, planted and distributed with so astute and gifted an eye, that every detail confirms a kind of spirituality, a graceful marriage of idea and achievement, concept and realization. I love the place, because I love the values and intent of its direction.

I won’t discuss dinner — I’ve done that over at Eating Every Day. But I must discuss our hostess, which is something I don’t often do here; I don’t like writing about real people; they are always so much bigger, more complex, more interesting than I can convey, and then there’s always the fear one won’t please them with one’s report. But, fact is, such people have chosen a public life, and for better or worse (probably the latter), I am by training and, I suppose, by nature a journalist; I like to write about what I see, if only to fix it in mind… Signora Imparata is perhaps seventy, well-built, handsome. She carries herself well: her posture is elegant but not stiff; her gestures are gentle but expressive. When she listens to you she looks at you frankly and directly, with interest; she has an impressive way of focussing on what you intend to say. Every part of her bearing is quiet, well regulated. When her well-formed hands move gently and gracefully apart, turning at the wrists to let the palms face one another, her fingers spread just a little, as if instead of punctuating a statement as to how something is she is carrying a small invisible but probably beautiful and fragile container of fact.

My mother was a very good women, but very strict, she said. I was sent to a religious school in Rome, where we learned to hide our attractions to things that were forbidden. I was very unhappy, not because of that, but because I could never learn to turn the sheet under properly when making the bed. It was a very strict upbringing: we walked with pieces of wood on our shoulders, and our heads, and another piece of wood thrust down behind the neck, to teach the proper way to carry ourselves.

My sister was a gifted musician; she practiced the piano ten or eleven hours a day; she lived for music and the piano. But when she asked if she could be a concertista, No, she was told, young women do not do that. We weren’t taught anything about money, about business. A frl lived on her parents’ income until she married, and of course she did marry; then she lived on her husband’s money. She was taught to run a household, to be cultural, to manage that side of life; no more.

But we knew the kitchen, the garden; plants; everything about the household. We knew sewing. When a double sheet — which was always very fine, highest quality — when there was a thin place coming, or it split; then we cut it and made it into single sheets. Then still smaller: serviettes; bandages. Finally it was only big enough for blowing the nose. But it was used as long as possible.

This was not because we were poor; far from it. It was simply the way things were done; it was a respect you paid to the things you had, to their quality. It was a completely different way of living. Can that way of living come back? No; I don’t think so. And yet, who knows, perhaps it will. Perhaps in the cycle of things it will come back; we will lose interest in life as it is lived now, we will realize the fullness of life consists in work, in attention, in appreciation of things as they are, of life as it comes to us.

When we began here, the people who help us asked why there were so many forks at the table; why does everyone at the table have two glasses, that is not the way we do, we have one fork, we need only one glass, but we quietly continued to put the proper number of forks and glasses at the settings because that is how we were taught things are done, and now I notice the people who help us they too at home have one glass for water another for wine; they too have the correct forks.

Signora Imparato — few people can be so well named: imparato means “taught” — speaks passable English and, I think, fairly fluent French, as well as Italian. The night we were there there was a Dutch couple, say twenty years younger than us, staying there; she and they spoke English together, and got on well. Her sister — perhaps the former pianist, perhaps another — has become an apparently well-recognized winemaker, and lives next door. There’s another woman who, I believe, cooks and certainly serves the breakfasts, which are copious and tasty. I suppose we will return; I can’t imagine driving past Salerno without stopping; the bed is so comfortable, the room so delightful, the dinner so rewarding, the conversation so pleasant.

The morning we left a young man was mowing the lawn under the lemon trees. Another couple of workmen were getting the small swimming pool ready for the season. Everything here is in order, calm, reassuring, pleasing. Nothing is out of balance. The contrast with the busy city that is Naples couldn’t be bigger — and yet Anna loves Naples, it has heart, as she says; it’s a performance; one forgives it its faults for its warmth and generosity and spectacle. These are exactly the virtues of La Vecchia Quercia, minus spectacle I suppose: but there comes a time one wants tranquility, even gentility, to enjoy the emergence of utilitarian sufficiency into beauty and order..

•La Vecchia Quercia, Via Montevetrano 4, Località Cantina di Campigliano, San Cipriano Picentino (Salerno)
Writing like this appears in three of my books: Roman Letters, two month-long stays in Rome; Mostly Spain, a month touring Madrid and Andalucia; Venice: and the idea of permanence, reflections on a couple of month-long sojourns in that city. Look for them in iBooks or simply by clicking on the title.
Posted by Charles Shere at 11:09 PM

I am very much enjoying reading about this excursion you both are having. I imagine a lot of us are, though without commenting. I particularly liked your description of the woman managing this place where you stayed - as usual such close and empathetic detail about her, and how it all seemed to be of one piece. It reminded me of a place Phil and I and the boys stayed in frequently in Mendocino - also not on the beaten tourist track, even before Mendocino became such a "location", run by an older couple, no TV, phone, etc - the entire front windows open onto the ocean. They would make fresh donuts every morning along with coffee and fresh squeezed orange juice and leave it on a tray outside the door. That was really more a display of the people they were - caring about their guests, non-ostentatious, committed to their idea of quality, friendly, and optimistic. I was so sad when they retired. It is interesting how the quality of the person becomes enmeshed with the quality of the place.
Happy travels!