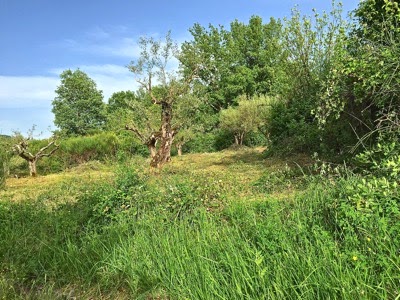 May 14-24, 2015—
A CLOSED IRON GATE; no doorbell to push. Three or four meters to the side, though, I notice a piece of paper posted to the mailbox, with a telephone number. By the time I call, though, we’ve been noticed; I see a man a hundred feet or so down the road at what must be the gate-opening sensor; the gate swings open, we drive down the smoothly graded gravel road, swing to the left along the oval turnaround, park as indicated in front of a long low row of guest rooms attached to a handsome stucco building with a fine rosebush covering part of the wall.

Couldn’t differ more from yesterday’s agriturismo. Where La Vecchia Quercia was serene and stately, Tenuta Montenuovo is clearly a work in progress, and a working farm. We’ve driven in through the olive grove, some of the trees severely cut back and thinned out recently. The house is halfway down hill from the gate in what seems to be a gentle hollow protected by forest from prevailing winds and the noise of the road (not that there’s any traffic); it faces away from its driveway, ninety degrees left, and down the slope in front of it I see a couple of horses standing peacefully near their quarters, one tethered, the other at liberty.

We’re shown into a big darkened dining room — interiors in this country seem always to be dimly lit, perhaps to save electricity, perhaps to keep cool in a climate given to heat. I suppose you could seat forty or fifty diners at these tables. There’s a short bar down the left side; the man who showed us in immediately offered us a coffee, making it in one of those new-fangled capsule espresso machines. He borrowed our passports for a few minutes — Italian hotels still have to register their guests with the government — and then gave us the key to room 4.

A nice enough room: double bed; armoire; writing-table; bathroom with shower. Enough sockets to power the laptop and telephone chargers. (I always carry a three-outlet adapter.) No view, though; strictly utilitarian. What do all the guests do, during what must be a busy enough season to reward all these accommodations? Well, I see a swimming pool, obviously not used at the moment; there’s a big flat area intended presumably for campers and tents. We learn later there are many walking trails in the area. Apparently Basilicata is developing a tourist economy; its hills and mountains a welcome respite from the heat of Campania and Puglia.

The room is quite basic but comfortable, and there’s a picnic table out in front of the dining room that finds the promised WiFi. (Wireless connectivity is increasingly important to us, and almost never present in rooms, only in lobbies, dining rooms, and the like.)

Getting here, now that had been a problem. We chose the place from an Internet site, agriturismo.it, which has a very handy iPhone app. Both show very clearly that the Tenuta is in the country, just outside the località of Carbone, but they also give Calvera as the site; so there we drove, up a steep road through a couple of switchbacks to the town, which had that rather closed aspect so many back-country villages project — not unfriendly, but a little bit guarded. We parked on the town square and walked to the only bar-café that was open. Three men in their forties, in work clothes, sat on the terrace between the doorway and the street; they’d been talking among themselves, but broke off as we approached. Salve, I said, the usual Italian for “hello”, and they nodded back, then resumed their loud conversation.

Inside a tired-looking (or possibly merely harassed) woman was cleaning something up behind the bar. We ordered coffees,, then returned to the terrace, where I pulled a plastic chair off a pile of them, nested together, and set it at the one table that had a chair. Before long another fellow came along, limping up to the terrace with a dog on a leash, and yanked his own chair free from the pile. The other men acknowledged him but showed no interest in him. A man drove a very noisy tractor up the street. Five o’clock hung heavily in the air. We drank our coffee and consulted our iPhones.

The tractor came back down the street, now pulling a trailer filled with what looked like compost. It sounded like the engine was about to throw a connecting rod. The clanking was really ominous. I looked at the man with the dog, who looked back at me, barely moving a facial muscle to show he knew what I was thinking. He looked toward the tractor, back at me, almost invisibly shook his head right, then left, and touched an earlobe.

We finished our coffee and paid; I replaced the chair I’d taken; we checked our information more closely, and drove down out of Calvera toward the river. Soon enough we saw a pannello advertising the Tenuta, and we followed its pointer, past a locked gate and up the road toward Carbone. On one side of the road, vineyards just leafing out, each vine with its wooden stake crowned with a rusty upside-down tin can, to protect it from the rain I suppose or to discourage perching birds. On the other side, olive groves, many of the trees very severely cut back. Before long we realized that locked gate must have been our evening’s hotel, and we turned back.

Giovanni told me the next day — I’m so nosy; I ask so many questions — that the place was ten years old; that that was his father-in-law working in the garden. Oh ho: so he married into the place. Well, why not. I asked how it was going. Well enough, he said. You don’t get rich, but it’s a good life. I was in Florence a few years, he added, I made more money there, but who wants to live like that?

His wife Carmela cooked our dinner and brought it to our table. A small but substantial woman with a full round face and dimples and a ready smile, she was dressed in whites and always, every time we saw her, wore a professional white cook’s cap, not a toque but a close-fitting brimless cap like those that gas-station attendants used to wear, when they weren’t slipped under their belts.

And what a cook she turned out to be! I write about most of our dinners on my other blog, and this year I started maintaining a list of restaurants we’ve been to. I decided not to attempt to assign “grades” to restaurants, partly in the spirit of equality, partly to evade the responsibility, mostly because one’s taste in restaurants is inescapably subjective — but some of them are so memorable, for one reason or another, that I single them out. That’s likely to happen with this one. 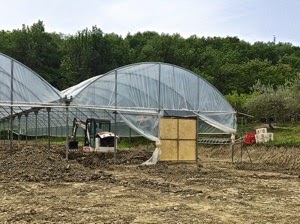 Next morning, after a solid night’s sleep, Giovanni was on a back-hoe, leveling a good-sized garden site already protected from the elements by an enormous canopy. This would supply tomatoes, zucchini, and eggplants, he explained. I looked around the place a little more, and discovered a good-sized swimming pool I’d overlooked the previous evening, not that I have a suit with me. I think in season this must be well attended, this place. People come for cycling and walking, Giovanni said; many come from Puglia, where they don’t have hills and forests of their own. As we would discover, in the next few days… •Bioagriturismo Tenuta Montenuovo, 85030 Calvera (PZ), Italy; +39 338.6368133
Posted by Charles Shere at 1:31 AM