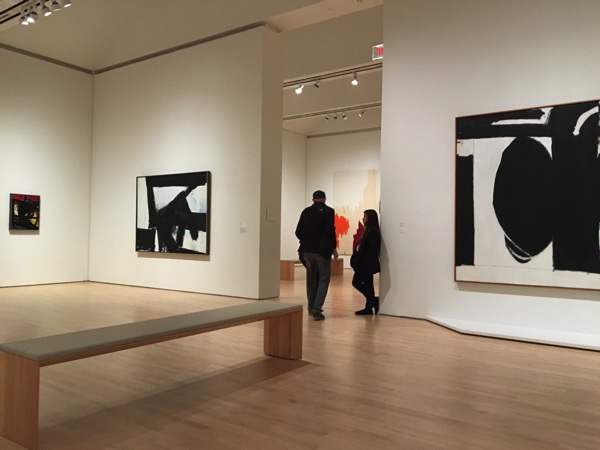 Eastside Road, December 10, 2016—
I HAVEN'T YET REALLY explored it nearly enough, but I'm here to tell you I'm pretty happy with what they've done to San Francisco's Museum of Modern Art, which has felt like a troublesome member of my family for fifty years.

More, I suppose; I recall visiting it with a French class from my junior college days back in the middle 1950s, when the high point of our visit was Renoir's life-size bronze Venus Victorious, beautifully installed in a Beaux-Arts rotunda in the old SFMA.

I still think of this museum by that monogram. San Francisco Museum of Art. In those days it wasn't thought necessary to put the word "modern" in the name; pre-modern art was well known to live out in the Golden Gate Park. SFMA was installed on the top (fourth) floor of the Veterans' Memorial Building, the north twin of the San Francisco Opera House, in three long rectangular galleries surrounding a huge central rotunda, smaller rotundas supplying articulating knee-joints, handy for such items as Venus Victorious.

The northern gallery was devoted to the museum's permanent collection, pride of place going to perhaps the oldest piece in the collection, Matisse's Woman in a Hat, not only nailing down the institution's claim to Modernism but nodding to local biography: it had been in the collection of one of the Stein siblings. From there the permanent collection continued with an engaging series of canvases giving equal weight to Mexico, Germany, the United States, Russia, France, and England. Nor was the San Francisco Bay Area neglected, though I came to think, in the 1960s when I began to think (and write) more seriously about painting, that one could well fill the entire SFMA with local masters: Lobdell, Smith, Bischoff, Diebenkorn, Thiebaud, Brown, De Feo, Jefferson… and then later on the next generation.

About the time I retired from daily art reviewing the SFMA moved to a brand new building, and from the City Hall-Symphony-Opera nexus to the emerging arts-entertainment-convention center building up south of Market Street between Second Street, let's say, and Fourth. I hated the new building, designed by the Swiss architect Mario Botta, a big five-storey cube of a monolith crowned with a turret (the pretentiously named "oculus") whose stripes hinted at Giotto — a hint repeated in the enormous lobby. Botta was no Giotto. When I interviewed Botta at the time the museum opened he gestured proudly around himself in that lobby and said he'd given it to the community as an assembly point, like a cathedral; I said it reminded me more of an oversize Greyhound Bus station.

Now, however, the Third Street building has been reclaimed with the simple, efficient, relatively inexpensive (I'm writing ironically) application of a sort of overcoat against the back of the Botta building. The oculus remains; so does the bus station. Upstairs, though, the galleries are larger, more airy, better lit; and the paintings — and the objects seem to be mostly paintings; sculpture seems sequestered for the most part off in its own more marginal domains — the paintings are further apart.

I do think these new galleries can tend too far toward the anodyne. I can't decide, for example, just how to respond to the juxtaposition you see above, of Franz Kline and Robert Motherwell, two of many powerhouses of postwar American abstractionism. The pairing is elegant, of course; the two canvases have much to say to one another. They stand like sentinels on either side of the passageway into a roomy gallery devoted to Clyfford Still's gifts, a number of his own paintings given with the stipulation they always be on view an never share space with competitors. Motherwell's elegy is protected from too close an inspection by an ingenious baseboard projection keeping intruding feet a proper at a distance; Kline's canvas, slightly smaller, slightly less intimidating, apparently needs no such device. (This in spite of its subtleties of color and texture, which invite close reading.) 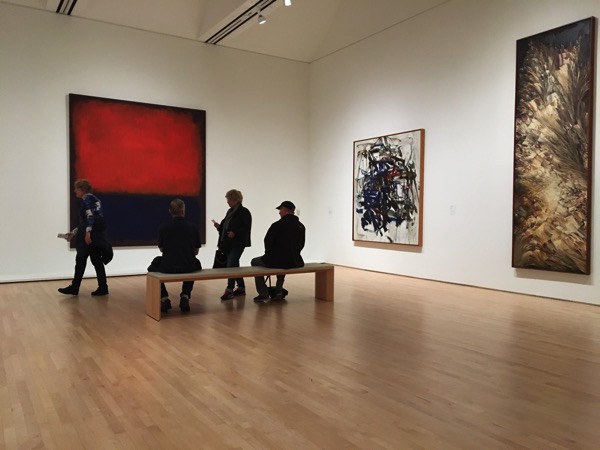 Motherwell is around the corner to the left from Mark Rothko, whose characteristic red-over-black has the requisite weight and mystery to hold its own among strong company — the Joan Mitchell and Jay DeFeo canvases to its left, and, across the gallery, equally strong work by Philip Guston.

The Rothko speaks especially to one of the friends with me; the Gustons speak to me. I don't visit this museum often; perhaps not often enough. I have such memories of the old SFMA on Van Ness Avenue: spending a magical half-hour talking to Guston, alone, in his retrospective, a few weeks before his death. Talking to Diebenkorn, to Thiebaud, to Jasper Johns. Talking to Georgia O'Keeffe, for God's sake, for nearly an hour, dodging her own questions about myself — what a master manipulator she was — in order to get into the immense cloud paintings she had been making, in her nineties.

Many of these paintings are old friends, friends who seem to know me as well as I know what I think I know of them. Arthur Dove's enigmatic, quietly exultant Silver Ball No. 2 ; Helen Torr's Windows and a Door ; Diego Rivera's The Flower Carrier ; all in the second gallery, just as they had been on Van Ness Avenue. I was astonished at seeing these paintings all holding their place just as they had half a century ago, and at the rush of familiarity, certainty, ease, and reassurance that attended my seeing them thus once again. And then the familiar strangeness within each of them individually, their air of challenging me, once again denying any possibility that I could finally know and understand them: their strength, their meaning lies in their ultimate impersonal and austere remoteness.

I have been retired nearly thirty years, and for nearly thirty years I've resisted going to galleries and concerts. In the old days I'd get to six a week, on average. Now in my eighties I seem to have got past the fatigue that had set in, the fatigue and the cynicism that had come with the rise of so much commercial fine art. There's that here at SFMOMA, of course; I can't get excited about the new German painting (sorry); most minimalism leaves me cold. I'm sure I'll get back to this museum sooner next time, and perhaps linger longer. I'll try to keep you informed, in case you're interested.

Posted by Charles Shere at 7:23 AM