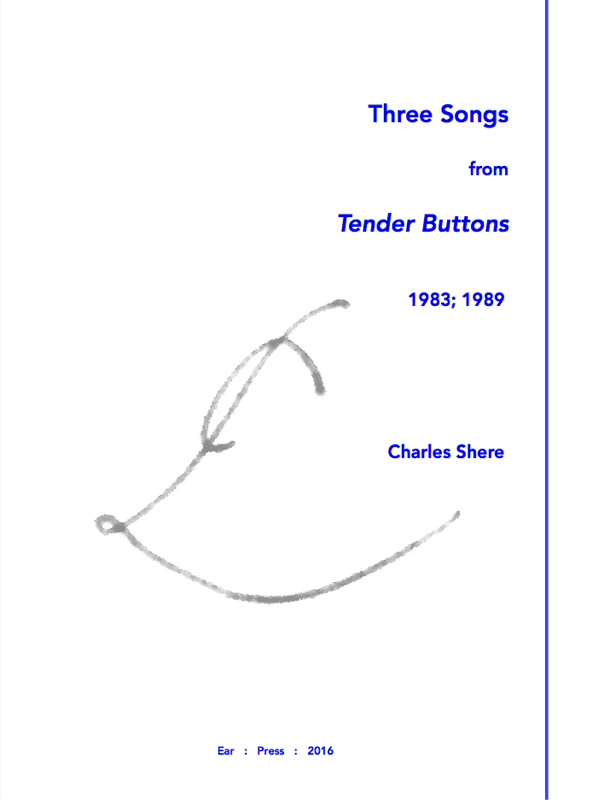 I MET THE WRITING of Gertrude Stein through the old RCA Victor recording of Virgil Thomson’s opera to her libretto Four Saints in Three Acts. That would have been in 1955 or thereabouts. What charmed me immediately was the innocence, clarity, fantasy, and good humor of both the words and the music. There were other examples of this sort of brittle, intelligent Modernism, notably William Walton’s setting of Edith Sitwell’s poems in Façade, but it was Stein who remained a constant favorite over the years.

It was not until 1972, though, that I thought to make my own musical settings of her work. This was Dates, a sort of chamber cantata for soprano, clarinetist, violinist, and percussionist. (The instrumentation includes clarinets in Eb and A, bass clarinet, violin and viola, marimba and vibraphone.)

Then in 1975 I turned to Tender Buttons, her collection of “cubist” prose poems, most of them short, and quickly set three of them: “Peeled Pencil. Choke,” “Dirt and Not Copper,” and “The White Hunter.” John Duykers sang the last two in one of those Bicentennial concerts nodding to American composers, but he will not remember this.

The wonderful soprano Judy Hubbell asked, I think, for some songs, and I thought of working my way slowly over the years through the whole of Tender Buttons, setting the texts to different performing forces. “A Carafe” was the first to appear, in 1983, and “Suppose an Eyes” and “Rhubarb” followed in 1989 for a recital she gave in San Francisco. It seemed logical to issue them as the present set.

In 1987 I got more serious about this and decided to begin setting the plays. I was learning to compose at the computer, and turned to Ladies Voices for inspiration, setting the play on three sopranos, woodwind quintet, and trap set. Two years later I made a complementary setting of I Like It to Be a Play, for three male voices (tenor, baritone, bass) and string quartet. (I would like one day to have the opportunity to set a finale to the trilogy, What Happened a Play, for the combined forces of the first two chamber operas.)

In 1997 I returned to Tender Buttons for a concert in Santa Cruz, setting “It Was Black, Black Took” and “Red Roses” for mezzo-soprano, violin, bass clarinet, and piano, and adding to them a setting of a fugitive Stein text, “You Can Only Say What You Know,” which I know only from Lew Welch’s quotation of it in his book How I Read Stein.

These Three Songs from Tender Buttons are meant to be light-hearted, though I do think “A Carafe” has rather a winsome quality, especially in Judy Hubbell's performance. I have added score and recording to my website: the score can be printed out, folded, and stapled in booklet form. The recording was made in live concert with amateur equipment, and there are little errors, but I am very fond of the performance, with Judy Hubbell, soprano; Roy Malan, violin; and the late Marvin Tartak, piano.

Posted by Charles Shere at 7:08 AM