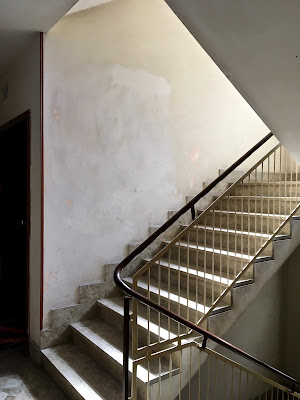 Via Damaso Cerquetti, April 19, 2017—
THE CLEANING LADY arrived today. I thought she looked familiar somehow: about five foot four, sturdy, dark straight bobbed hair, a pleasant smile. She rang the doorbell at two o’clock, as we’d expected, stepped in introducing herself (Maria), stepped to the coat closet and extricated a house-dress smock I hadn’t noticed before, and set to.

I took a nap, so am not absolutely sure what she did. I slept on the living room couch until Lindsey woke me, then moved to our bedroom. For the first time in days the steel roll-down shutter was fully open, ditto the two leaves of the window. Sun streamed into the room; the air was fresh.

Of course we’d prepared for her. My backpack, which has lain open at the foot of the bed on my side, against the wall, was in the closet; my slippers ditto; my travel painting and photo and bandana on my pillow. I lay down on the bed to finish my map and was pleased to find the spot where I lie was warm. I thought for a moment that there must be an electric blanket, but I knew that wasn’t the case — we sleep on a sheet and under a duvet, like most Europeans these days. (Or nights, I suppose I should write.) It was simply that the sun had warmed that spot on the bed. Delightful.

After a bit I was fully awake and moved back into the liviing room, where she was finishing up. In two hours she had cleaned both bathrooms, the kitchen, mopped and swept the floors, and polished all the windows. She was still smiling.

We had a little conversation, in the course of which I learned that our palazzo (apartment building) is fifty or sixty years old; the ones across the street are new and have replaced a block of palazzi similar to ours; the apartments within our building differ considerably from one another; ours was substantially remodelled when the current owners moved in (interior walls done away with, new wood floor, new built-ins in the bedroom, new kitchen appliances); she cleans many of the apartments in this building.

She asked politely where we were from and we told her and I reciprocated. Sono da Romania, she said, I’m from Romania, not from Bucharest, from the mountains, and I saw why she looked familiar, she looked like so many of the women I’d seen in Brasov and Cluj and thereabouts when I was in Romania nearly thirty-five years ago. I told her I’d traveled in her country and that I thought it was very beautiful. Yes, she said, Italy is beautiful, but Romania is more beautiful, especially the mountains. I don’t like antiquities, she said, the Pantheon, the Colisseum. The Vatican is beautiful of course, it is the home of the Pope, but the rest, you see it once, you don’t have to see it again. But the mountains, and the forests…

I told her I’d always wanted to walk in her mountains and forests. You should, she said, the people will like you to come. Are there still bears and wolves, I wondered. Oh yes, more than ever, we used to kill them but we don’t do that any more so there are more and more of them. Horses, sheep, many sheep… she smiled, partly I think at her immodesty in sharing her nostalgia, partly in simple friendliness.

After she left I went down with fourteen-year-old to do some shopping and found another reason she’d looked familiar: she’s the concierge. As I think I’ve said before, this palazzo, like most, has a little office in the lobby for a concierge. There’s an outer glass door, a big one, which is always locked; there’s an inner one which is never locked; then you come to the lobby, and on your left is the concierge’s office. Perhaps she lives here: I don’t know.

I’ve only met one other Italian residential concierge, in Verona. He too was an immigrant, but from Nepal I think, or some such south central Asian country. Maria is Romanian, descended from the Dacians who were conquered by Emperor Trajan about 100 CE. Things were not so good when I was in Romania, a few years before the end of the Ceaucescu regime; poverty was extreme, and governmental spying and suppression quite extreme.

I suppose it’s better now. I met a Romanian a few years ago in Sicily; he walked into an apparently empty bar in which I was sitting, waiting while Lindsey did the laundry, and mistook me for the bartender, and ordered a coffee. He was very apologetic when I explained I was just resting while the bartender was off doing whatever he was doing, and we fell into a conversation. It’s terribly hard in Romania now, he said, that’s why I’m here in Sicily, looking for work, there’s no work in Romania. But it is so beautiful there…

Posted by Charles Shere at 9:26 AM