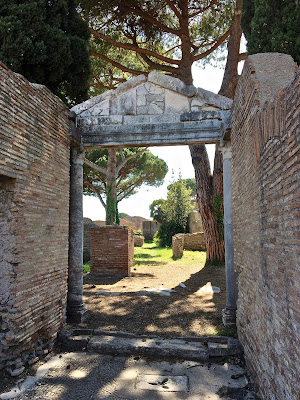 Via Damaso Cerquetti, Rome, April 22, 2017—
I THINK IT BETTER to plant gardens than build palaces, as I’ve written here before, because the ruins of gardens regrow, whereas the ruins of palaces continue to crumble away. And gardens are, as I’ve also tried to suggest, a collaboration with nature, while palaces seem to be testaments to short-term victories over her.

So after strolling the Roseto and the Orange-Tree Park we returned to the Forum. The previous day we’d strolled above it, on the Capitoline, where four hundred years ago the Farnese family had built a palace and a garden, the bones of which remain. It is now by and large an empty plateau atop the hill, if indeed it is a hill and not a pile of layers of ruined palaces. But it is pleasant, even on a cold and windy day, to stroll the site, and look out over the domes and rooftops of Rome, which thankfully has not allowed any high-rise building within view. Thanks to the wind blowing down from the Alps we could easily see the hills to the north, a number of miles distant. Miles are like decades and add up to centuries.

That afternoon we looked down on the Forum, which is much more cluttered than I recall it from a dozen years ago. I’m not sure why I think this. It seems to me short squared column-bases made of brick have been set about to show the outlines of long-vanished buildings. This afternoon we strolled the Forum itself — after the Roseto and Santa Sabina my feet. and knees protested further climbs up stairsteps; by the end of the day we’d covered seven miles on foot. And yes, on closer inspection, the Forum is more cluttered, but with helpful panels telling you in Italian and English what it is you think you’re looking at. Or, in the case of many visitors, photographing with your telephone and selfie-stick.

By the time we got to the Forum it was late in the afternoon, approaching that magic hour when the sun begins to accentuate the reds and the strong contrast of longer shadows accentuate the architecture, bringing the flutings of columns and the edges of reliefs into greater — well, relief. And, miracle of miracles, there are few visitors. You can take a photograph of this ruined temple or that without a single visitor in the frame.

After our first visit to Europe, over forty years ago, on showing slides we’t taken to a visitor (one did that in those days), he asked But are there no people in Europe? Only buildings and landscapes? And I explained that I didn’t like to photograph people, it seemed intrusive, a violation of selfhood. Now of course there’s no such compunction: everyone is photographing everybody, deliberately or per caso, accidentally. Now my reason for avoiding people in settings like this is that they too strongly temporize the picture: costume, hairstyle, telephone, backpack all scream PRESENT, when what I want to record, for my own later contemplation, is CONTINUITY.

For to me the value of the ruins of temples and palaces is their testimony to the process of time. I wrote at the outset of these letters that I was here to contemplate my feelings about religion, and to see friends and relations, and to eat and drink and walk and think. I arrived a bit of a ruin myself, thanks to the helpfulness of modern medicine, but I’m pretty well recovered from that: still, I contemplate the inevitable ruination.

One fellow after another has built here a palace, or an arch, or a fancy column, or a temple, dedicated largely to his own glory, and another fellow has come along and used the result as a quarry to build something bigger or better or more glorious. Some of these fellows of course were geniuses and I am glad for their work: Hadrian, Michelangelo. Some had the public good in mind as well as their own gloire : Trajan. The result is all the same.

Today we went out to Ostia Antica, the archaeological preserve preserving, archaeologically, what’s left of old Ostia, the seaport supplying Rome, whose own port was of course a river port on the Tiber. Ostia Antica is quite an amazing place. You can rent a little recorded tourguidee who discusses numbered stops, or you can ignore him. You can climb to the top tier of seats of a four-thousand seat theater, sit, and wonder what the backdrop must have been when it was there, with its statues of gods and, probably, donors.

You wander freely the narrow streets between residences, taverns, and storerooms. This was a working city, not a fashionable weekend retreat like Herculaneum; most of the rooms are small. You can only wonder what it may have looked like when its superstructure was still in place, for it was mostly made of wood, and all of it is long since gone.

You can kneel down and brush sand away from the edge of a patch of mosaic floor, laid down two thousand years ago, and expose more of it; and when you stand back up again, and walk on, you notice the ground is strewn with little cubes of white stone which must once have been parts of similar mosaic or terrazzo floors.

Poor Italy! Preserving, interpreting, ignoring these ruins, these and many others — Italic, Etruscan, Greek, Roman, even medieval — must be a constant headache. The archaeologists have to decide where to dig, and how far down. The government, I suppose, has to decide when to protect, when to recognize the futility of any thought of perfect control. And of course these historical records are an important tourist attraction; Christian or not, one goes to Rome to savor and contemplate all this history.

These days there are useful virtual reconstructions, guidebooks whose illustrations are overlays in which photographs of the present, with automobiles and backpacks, lift up to reveal artists’ imaginings of Rome As It Was, pristine and white-marbled. (Some of these concede that the statues were painted when they were new.) One day perhaps archaeology, marketing, and software engineering will be able to make virtual reality of what is now fields of fragments numbered, gathered in tubs, laid out on shelves or on fields, method and order promising the possibility of finally knowing what must have been, perhaps in order to be able to suggest what might one day be.

Many years ago I was asked what I wanted to accomplish before dying. The question was asked seriously, in the context of a conversation meant to ease, somehow, some of the vexing problems that seemed so overwhelming at the moment, and so inconsequential as I look back. I want to have an idea of what it all means, I answered, aware of the insolence of the ambition but incapable of denying it. I think that is what energizes all the sciences, but particularly that of archaeology.

I think the palaces, let alone the humble warehouses in the port, will never be rebuilt in actuality. Much of the marble was stripped to decorate the great building spree of the Italian Renaissance and the Baroque period following. Heads were broken off statues for some reason, I’ve never quite understood why, perhaps because the entire statue would have been too heavy to carry off quickly. Headless statues were often consigned to the lime-kilns to be reduced to cement.

My point in this rambling meditation is that palaces seem to me to be conceived and built beyond the angle of repose, the point of sustainability, far beyond. Their construction and maintenance employ many people who might otherwise have nothing to do, but at the expense of resources, including previous palaces. And I wonder if the Christian church, and perhaps governmental administration, don’t court the same folly as ultimately destroys palaces.

Gardens seem to me to represent the same urge, but within the angle of repose, the point of sustainability. I would rather clip hedges than chip stones.

Posted by Charles Shere at 1:05 AM

There's a lot I could say to this post, Charles. Many of the things you describe I think about often. I'll try to restrain myself to a couple points. I've not visited a lot of major historical sites similar to those you are describing. A few in the London area, and ones that affected me most were in the Yucatan - where I would gladly revisit given the opportunity and money. I am interested in past and current buildings, cities etc mostly because of the imprint they leave about people themselves - how they lived, organized themselves, what they did, and sadly how their society ended, if that is the case. When I grew up in Montana my family often visited old towns, ghost towns they were often called - usually mining towns that had been abandoned because the promise of wealth wasn't accomplished. Humble. And in my home town, as in so many western towns (and maybe beyond that) tunnels were built and odd little habitats created, one of which was accessed by the store my family ran - which I didn't know about when I was growing up. It turns out part of the purpose of the tunnel was for opium consumption - and it was also used when prohibition was active. Which does say a bit about my family. These are much less impressive, but still telling, stories from the past.
At the same time I prefer gardening. And visiting gardens. I like to get up in the morning and go outside and check out the trees, think about the various plants I'm working with, watch how things grow without cultivation, measuring impact of weather. Actually my attention to weather drives my sons crazy - they having been raised in Oakland certainly don't have that day to day pressure to know what is coming that I grew up with in northern Montana. I don't think I prefer gardening for the deep reasons you are talking about though - I think it is just a simple, basic soul comforting thing that makes the day better. Every day plants have different things going on, and it is endlessly fascinating to me.
It is part, I think, of faith. I wrote about that on your blog once before. It puts human life in perspective for me. I am part of that plant and that dirt, and it is part of me - and we/it are all changing every moment. Nothing to worry about - that is the truth of change, and that is the comfort of change. And that is the power of something beyond our meaning in the here and now - because every moment is also a part of the past, part of this exact instant, and moving into the future. I find this thought very helpful. My youngest son, however, at least now doesn't share the sense of comfort I get from this - he sees this as in some way linked to a never-ending cycle that he describes as infinity and that gives him great pause. Isn't it strange how our understandings can be so different and result in such profound differences in how we see life?