Venice Journal, 8: Out of town

Treppo Carnica, June 3, 2011—
VENICE IS JAMMED at the moment; the apartment we've taken for the month had been previously rented for this weekend. It's the opening of the Biennale, and all kinds of people are converging on the town, for all kinds of reasons, no doubt.

Our agent had explained this to us when we took the place; we knew we'd have to give up the apartment for these few days. Our only question had been, where to go? In the end the weather told us: up into the mountains. So yesterday we dragged ourselves and all our belongings over to the Piazzale Roma whence we were shuttle-vanned to a Hertz lot north of Mestre.

There, a little after eleven o'clock, we got into a shiny black Ford Fiesta and drove up into the mountains. Most of the way we were on the autostrada, remarkable only for long code (“tails,” queues) of stopped traffic, fortunately going the other direction; and for the truck driver I watched at one of the service areas where we'd stopped for sandwiches and a coffee.

Alas, I did not catch him at one of the times he carefully poured the steaming-hot water out of the saucepan in which he'd just cooked his pasta — he ate at least two pans full.

From Udine north the road began to climb, imperceptibly at first, later quicker. The flora changed dramatically, from the lower farmland — corn, for the most part — to forest. Now and then our road bridged broad riverbeds strewn with white gravel and boulders, a narrow blue-grey stream rushing down to the Adriatic.

At last we left the highway and returned to narrower SS (strada statale, regional road) highways, one lane in each direction, well paved, the curves and grades well engineered. And finally we were in Treppo Carnica — “Carnica” both to situate the village, here in the foothills of the Carnic Alps on the Austrian border, and to differentiate it from another Treppo, Treppo Grande (though I bet it isn't), nearer Udine.

After settling into a comfortable room, whose windows look out onto a ridge to the south, we went for a short walkabout. It's a mountain village like many; we couldn't help being reminded of St. Pierre de Chartreuse, where we used to stay so many years ago. Fresh-cut grass, with alpine flowers; stone-and-plank farm buildings; a freshet pouring down the hill between neat homesteads; well-tended gardens trending, this time of year, to pole beans and potatoes. 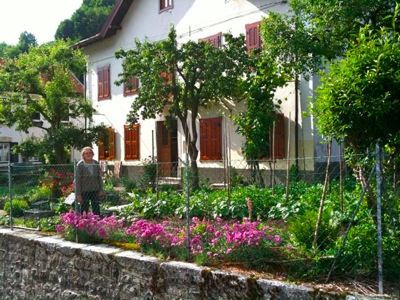 We stopped to admire one garden, bordered by fragrant carnations and stocks but containing plenty of vegetables. Its proprietor seemed surprised we'd find it worth stopping for, explaining the flowers were there simply because she liked smelling them. It was hard to understand her Italian: the local dialect is apparently pretty forceful, elbowing schoolroom Italian out of daily conversation. It was hard to break off the conversation, partly because of that: but we continued our peregrination, 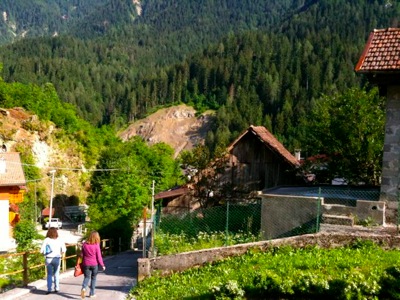 up and down steep streets, heading back to the Albergo.

Dinner was cucina povera, as described over at Eating Every Day. The fellow who owns this place is very keen on explaining his land, of which he's proud as any native son, to these visiting Californians — the more so since we have connections to the ValSusa on the other side of northern Italy, and he was visiting there just last weekend. His mother, I suppose it is, presented us with the menu, but it was spoken, mostly in dialect, and the details evaded us. It was simple and local, though, and delicious, and we slept well. 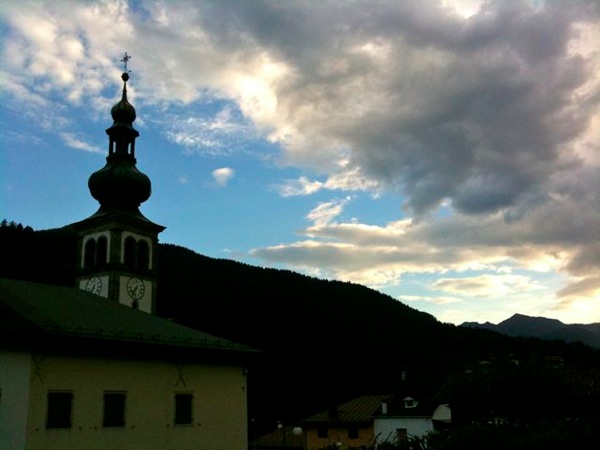 It's lucky you speak Italian. With my smattering of French, I can just barely get around in France. But in Italy--it can get hairy.

I wish I spoke italian. I get by, but what I do to this subtle, melodious language is pretty barbaric. Strictly present tense, no conditional or subjunctive, and a vocabulary that's too often confected of misremembered French and Spanish. But people are indulgent, and seem to guess the intent.