Venice, June 8, 2011—
WE DO NOT TRAVEL unmindful of what I refer to as the Principle of Redistribution of Wealth, which in less generous moments I call theft and loss. Especially we do not travel to Venice without contemplating such things. The Serene Republic was built, after all, on the backs of exploited people, with stuff and money rarely contributed willingly.

Ten years ago, when we were here for a month with two other granddaughters, sharing an apartment with another couple, our friend's camera was stolen right off the back of the chair in which he was sitting while eating lunch. This was on the Fondamenta della Sensa, at the Osteria alla 40 Ladroni (the forty big thieves), which gave no end of amusement to the police when he filed his denuncio.

Loss is part of the melancholic attractiveness of this city, but sometimes Retrieval is part of the fabric. Perhaps just as often: perhaps loss is only exchange, looked at from one end, and retrieval is an inescapable half of the dialectic; perhaps Serenity can only be achieved when such perfect balances are attained in all transactions.

We were out to the Madonna dell'Orto yesterday, a very beautiful church, because relatively austere; very nicely sited, because off the beaten track at the Fondamente Nove. The name refers to a Madonna and Child found in, or retrieved from, a garden that once stood next door the church. Various accounts of many events in the long history of this place — which dates back to the sixth century, after all — disagree on various matters. One source says this Madonna was a painting; others say a sculpture. You'd think that would be an easy matter to clarify, and as you'll see, it is. 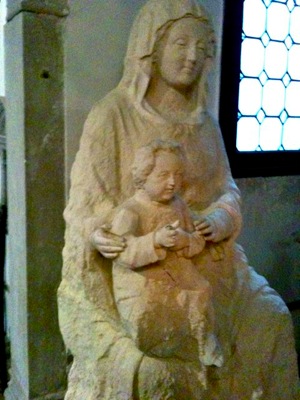 Sources disagree, too, as to whether this miraculous thing — everyone agrees it's miraculous, in one way or another — was truly lost and luckily found, or simply moved, with the former owner's permission or not, from the next-door garden.

She's off in a corner of a corner chapel, fairly unremarkable otherwise. The statue itself looks pretty old to me, and not particularly reverent. The Madonna looks like the older Gertrude Stein, after she'd put on weight; and the Child looks like Benito Mussolini. The whole thing looks Roman, somehow, and I wonder if it wasn't carved to represent some other mother and child, and has simply been appropriated, as Christianity has appropriated so many strands of previous culture, either deliberately or simply as part of the reckless, unpremeditated, even completely impersonal progress — I use the word in its most neutral sense — of history.

Like most sculpture, all sculpture if the word's used correctly, even here in Venice, the home of the Biennale with all its up-to-the-minute art (about which more later, in another dispatch), this thing is definitely solid, substantial, physical, threedimensional, Found. What remains lost is its story, so others have been fabricated; narrative, like Nature, abhors a vacuum.DINNER LAST NIGHT at a nearby restaurant to honor a birthday. A nice, cozy, rather pretty room; a late dinner. At the next table, three young American men, frat men F___ calls them; they first got her attention when she overheard "I just can't get the hang of this Italian thing". At another, an American couple in their fifties or early sixties, apparently also celebrating an event of some sort.

We all finished at about the same time, so I was able to witness another example of Redistribution — a missing iPhone. Consternation. Where can it be. It was right here next to me. Are you sure you had it? Of course I'm sure; I was using it.

(I can attest to that: I saw semiclandestine photos being taken with it.)

By now it was late, close to eleven o'clock. Dinner is generally earlier in Venice than elsewhere in Italy. The kitchen was closed and cleaning up, the busboy was washing up some dishes, our waiter was closing out his accounts, the barman-proprietor was eyeing the whole scene with that appreciative, analytical, managerial eye that's so impressive, so admirable, when subtly and efficiently handled, as it was here.

Everyone looked everywhere: on and under the chairs and tables, in pockets and purses, on the floor. Ah, a waiter said, Perhaps it's in the tablecloth; and went to the next room where we saw, through an open doorway, a basket of crumpled linens; and where we then saw him methodically take all of them out, shake them carefully, and then sadly report the thing was not there either.

The aggrieved party was, well, aggrieved; nothing to do but fare un denuncio, file a police report. Restaurant staff looked perturbed; I thought the busboy, particularly, seemed a little nervous: and why wouldn't he be? He would of course be the first to be suspected, for at least two reasons, both contemptible. He was the only staffer not clearly Italian — he'd confused us when he offered "pepe fresca," "fresh (black) pepper": his Italian seemed unidiomatic, translated out of some other native language by way of English: and the other native language was assumed to be South Indian, by his physical appearance. Anyway, he looked nervous.

Finally, of course, the missing iPhone was found, in an upstairs pocket apparently little used under normal circumstances by its owner, and the owner was sheepish, and the proprietor was (properly, I though) rather I-told-you-so: siamo bravi; non siamo ladri, he said; we're good people (here), we're not thieves. But it had been a bit of a scare. 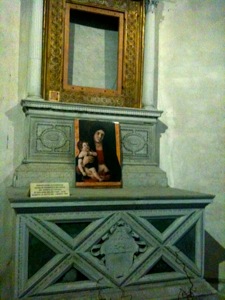 Back home I looked over the day's photos. Among them one I find rather touching: the first side chapel on the left, at Madonna dell'Orto, where a particularly beautiful Bellini should be hanging, and where there is now in fact only an empty frame. The painting was redistributed in the early 1990s, according to a label accompanying the photographic reproduction standing near the empty frame.

The reproduction appears to be quite faithful, though — as the label takes care to point out — a little less than life size. Light falls on it in such a way that it itself can't be adequately photographed, at least not clandestinely, with an iPhone, so you'll have to take my word for it.

Lost, strayed, or stolen, it's a memorable painting; like all memorable paintings, it haunts a peculiar corner of one's memory. I'm not a painter; I couldn't begin to reproduce it, not even sketch its outlines, from memory. I seem to see it, with my mind's eye, in terms of light and colors, vaguely distributed across its rectangular space. The blues are haunting.
Posted by Charles Shere at 1:30 AM