Venice, June 9, 2011—
WELL, YES, some of you are kind enough to wonder: but what are you actually doing there in Venice? 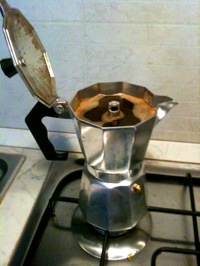 Fair enough: here's an account of today's activity, a typical day. It's a little embarrassing, because it's pretty haphazard. But that's how things go. I get up first, about eight, and pad downstairs to put the coffee and milk on the stove. F___ yawns and says Buongiorno sleepily. L. arrives a little later, after I call upstairs: De koffie is klaar!

Usually we have toast, made by grilling sliced bread or rolls in the frying pan, there being no toaster here. This morning there was half an almond torte left over from yesterday's special Lindsey's-Birthday-Boxing-Day breakfast, so we made do with that. Then F____ and I read half a Pirandello story to one another, and I finished reading it to myself — “Non c'e una cosa seria,” in Italian and in English translation.

Then we went out in search of the day's adventure. We walked down the Strada Nova to the Ca' d'Oro and took the traghetto across to the Pescheria, where we inspected the fish market. Everything looked okay: much cleaner than previously — word is the boys in Brussels, imposing their European Union imperatives, have ordered the seagulls and pigeons out of the market. This makes me a little sad, but I suppose it's all for the best.

Next order of business: get somehow to the Ca' Pesaro, Venice's Museum of Modern Art. This involves getting lost a couple of times, taking two or three dead-end alleys, counting Scotch terriers, marveling at oddly inscribed sweatshirts on (other) tourists, that sort of thing.

The Ca' Pesaro must be the only Museum of Modern Art all of whose paintings in the first gallery were finished before the invention of the telephone. Nor does it seem to have anything done after the end of the Korean War. There are a couple of marvelous things here: a luscious Bonnard, a brilliant Klimt, a series of impressive pieces by Medardo Rosso.

There are also, of course, plenty of second-rate pieces by second-rate artists, to be generous. But as L. said, it's good that there are such collections; the morning was not wasted. It takes a lot of stuff at the bottom, and throughout the middle too, to provide a base for the few things at the top. Besides, who are we to… but that's not really sincere, is it.

A quick sandwich and a glass of Pinot grigio at the museum café, and on to the next assignment: the ongoing assault on Venice's gelaterie. We take ice cream pretty seriously in our family; the art-and-craft of making it is as technical, complex, and privy to failure as is that of making paintings. And while we can photograph various ice creams, preserving their visual appearance quite as well as we do that of the paintings we see, we can't record their taste, smell, and texture; we can only take notes, or try to commit to memory. Rating the gelati we have tasted is therefore a fool's game: but we try. Buono, I might say, ma non ottimo; or occasionally ottimo, ma non ultimo. Now and then, though, as today, F___ and I will exchange glances over our cups — well, in fact, she almost invariably prefers cones — and simply vocalize a quiet little “hum.”

That means it's really, really good. Ultimo, in fact. Today's gelateria was one we'd run across a week or so ago, early on this visit, VizioVirtù, on the Sestiere San Polo. It's an unusual gelateria: only six flavors, and them in covered cans in the freezer-chest. They're almost invisible from the street. And it's not really a gelateria at all, but a cioccolateria whose principal product we've yet to try. (We will, we will.)

I had two flavors: peach-lemon and vanilla. I usually have fior di latte and crema; I think strong flavors mask flaws in technique and compromises in ingredients, and after all I'm not here to enjoy this stuff, but to decide which ones are good. But this time I went for a little flavor, and oh my it was ultimo. 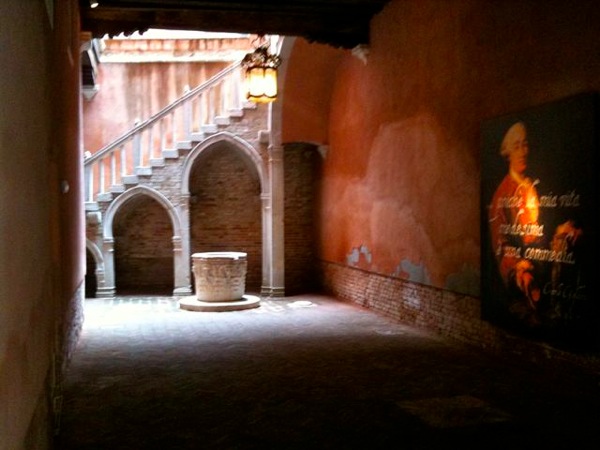 Just before getting to VizioVirtù we ran across the Carlo Goldoni house-museum. What serendipity! (But of course that's the essence of Venice.) I'd already been attracted by the sight of a staircase behind a locked grating, and stuck my camera between the bars to try to catch it. Immediately, though, we next came to a sign and a doorway inviting us in. The large, elegantly proportioned cortile is beautifully though dimly lit: at one end, a grate over a doorway looking out onto a side canal; at the other, the staircase, open to the sky, leading up to the house on the first floor: ascending it, you realize all really Italian Italian houses begin upstairs; they're set atop stables, or cantinas, or garages, or as in this case a courtyard, empty now, but probably at one time given over to a donkey, a few barrels of wine, and a boat.

Upstairs, a nice room with a closed-circuit video introducing the master playwright to the visiting tourists. In adjacent rooms, a charming marionette theater and a few 18th-century volumes of Goldoni's plays. Alas, there's no theater on in Venice: O teatro, o la Biennale, the woman at the ticket-counter explained; it's either theater season, or the Biennale.

We stopped in on a few churches today, admiring Tintoretto and Titian and, even more, architects who remain anonymous to me. Some of them are given over to temporary displays having to do with the Biennale. We've seen half a dozen of these ancillary exhibitions so far; of them, only the Romanian one has impressed me — but I'm saving the Biennale for another day's comments, after I've seen more of it.

Getting late in the afternoon: time to find our way home. A few more twists and turns; a few streets wide enough for only one person; a few bridges looking out onto views of surprising beauty and richness of detail even if you've just crossed it in the other direction, only to find out you've taken exactly the wrong direction yet again.

We stop off to buy some guanciale and a bottle of milk, and I step into a wine-shop for some red wine. You don't drink only white, I point out to the shopkeeper, surprised that I'm not asking for my usual flat prosecco. The wine comes from carboys through plastic tubes, and is poured into one-and-a-half liter plastic water-bottles recycled for the purpose. (Usually I bring my own glass bottle in; I hadn't wanted to carry it all day today.)

We carry it and the groceries home. I check the e-mail and look in on Facebook, then transfer the day's photos to the laptop for safekeeping, while L. makes the omelet. I make the salad. F___ goes about her clerical duties. We eat dinner slowly and appreciatively, exchanging more little “hum”s over it.

Just past l'heure bleue, when it's nearly dark, we go out for a walk. We walk past an osteria I want to go to soon for dinner: Dalla Marisa, which has a terrific reputation, but which I'd heard a week or two ago had been sold. It's late; only a couple of canalside tables are occupied, though the indoors tables are still full.

A waitress bustles back and forth, kitchen to canal, and I stop her in for a moment: Marisa, ancora cui? I ask in my broken Italian: Is Marisa still here? No, signor: un altra persona. La figlia. Oh ho: it's true: Marisa's no longer in charge; but if her daughter's taken over…

E c'e ancora buono? And is it still good, I ask, mischievously — Meglio, better, comes the reply, with a knowing smile: and I bet this is the daughter herself. We'll give it a try next week. 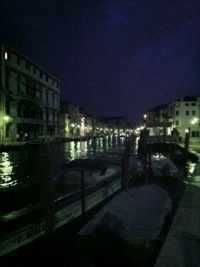 By now it's dark. We walk out to the end of the Fondamenta to take some last photos of the day. Down the quay to our left I can just make out the form of a man lying on a blanket on the pavement. He hasn't yet gone to sleep: he's half sitting, the back of his head resting against the building behind him, cushioned by a jacket or sweater or shirt, I can't quite make out what it is. He's gazing out over the lagoon, dark and blue and peaceful under the night sky. The the left a row of lights indicate the shoreline, leading from Mestre up toward the airport.

Here and there a bright yellow light on a pole ripples the quiet surface of the water. A small boat glides by, a faint light on its prow. Voices come across the water. We turn back to the city and take a final photo down the canal, toward the Ponte Tre Archi, the only three-arched bridge in Venice. The water laps gently against the fondamenta; the air is deliciously soft and fragrant.

Hum, we say to one another; this is truly a beautiful city, la vita e assolutamente bella.
Posted by Charles Shere at 3:08 PM

The places look so sober like there are no crimes that would happen. I wish to live in such places.