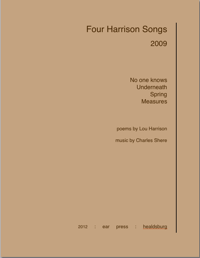 AND NOW, MARVELOUS how much time is gained on fast days, here are four more songs, written more recently, only three years ago…

IN THE SPRING OF 2009 the tenor John Duykers asked for some songs on the subject of planting, and a number of poems from Lou Harrison’s book Joys and Perplexities came quickly to mind. I first met John in 1976, when he sang two songs of mine, “The White Hunter” and another whose title I forget, in a recital at the Oakland Museum, part of the Bicentennial celebrations. Ten years later he took on the demanding role of Heldentenor in my opera The Bride Stripped Bare by Her Bachelors, Even, when it was workshopped at Mills College, also in Oakland.

I met Lou Harrison earlier, in the middle 1960s, and saw him off and on in the years following, at Mills College where we both taught, at the Cabrillo Music Festival where for years he was genius loci, and on increasingly frequent visits in the early 1980s, when I was working on a biography of him, never to be completed. Lou was of course a wonderful composer and a valuable poet; more than that, he was, as Virgil Thomson wrote, what the French called une grande Nature, a force of Nature, an extraordinarily cultured man with a fine intelligence and a photographic memory. He was also an anti-Modernist, by which I do not mean a Luddite — he enjoyed gadgets as much as anyone — but a person who celebrated and participated in life and humanity throughout the entire range, from the cosmic and biological principles governing our existence to the pleasures and perplexities issuing from the flowering of the human mind and imagination.

Lou, John, and I have one thing in common: Though we travel internationally, and enjoy the benefits of international correspondence and experience, we are Californians resident in a rural context. We value silence and the presence of Nature relatively unmodulated by industrialization. Such a life naturally suits a contemplative mind, the sort Lou evinces in his poetry.