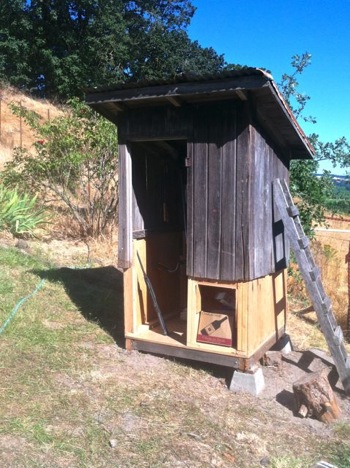 WHEN WE BOUGHT our place here on Eastside Road, hence the name of this blog, we found twenty-eight acres, a horse, three sheep, a blue two-storey house built in 1872 by Lindsey Carson (Kit Carson's brother, an itinerant carpenter who seems to have built the same house on a number of Sonoma county locations), two and a half barns, an oil shed, a machine shed, a chicken house, and a long-since disused outhouse.

The last item was early on converted into a doghouse of sorts, or perhaps the intent was to make it a playhouse. I'm not sure. I didn't participate in the conversion, which was effected simply by shortening the building, probably by turning it on its side, on blocks or sawhorses, and cutting off the bottom three feet or so, and then setting it up in a new location.

After it had served its new purpose we dragged it onto the El Camino and hauled it up the hill to the site of the new house I was building for Lindsey and me. (Until then we'd occupied a room in the big house, where our oldest daughter lives with her husband and, until they grew up and moved out, their two daughters.)

Ten or twelve years ago my brother Timothy and I set it up on blocks, and since then it's served as a casual dumping place for twogallon gas cans, the string trimmer, a bucket of wooden stakes, a family of rats, a big plastic bag full of big empty plastic bags, a box of grapevine cuttings for the grill, and whatever else drifted in.

On the corrugated-iron roof, fourteen or twenty iron T-posts left over from an early fencing project, a plumber's snake, a couple of lengths of iron pipe.

It was an eyesore, of course, and not particularly useful. Lindsey was not happy with it. So for the last week we've been working at a project of architectural restoration. I set a couple of posts in the ground, and added a couple of concrete piers on the downhill side, and built a floor with redwood two-by-fours and half a sheet of plywood.

Then came the tricky part: how to restore the bottom third of the building? I settled on three two-foot panels of plywood screwed to two-by-fours extending beyond, which met the stubs of the corner posts in the shed, and scabbed them on with extensions, also two-bys. Then it was a question of setting the thing upright onto the floor.

We did that the old-fashioned way, levering it up until it reached a tipping point, then swiveling it on the floor until correctly oriented. More recently I've been installing shelving. Later we'll cover the plywood sheathing with scrap weathered redwood siding from the fallendown barn, and add a door.

It'll be a good place for poisons, sprays, gas cans, and garden tools. It'll still look like an outhouse, of course; not much we can do about that. Well, maybe that's okay. Maybe one day the septic system will fail here, and I'll have to readapt it to its original purpose.

Where do you get your water?

We had friends years ago who built a house in Sebastopol, for which I did a full landscape design. The wife didn't like it. Why is it that wives never like their husbands' friends?

Any, we stayed the night there once, and on a hunch I lifted up the toilet tank lid, and discovered that there was a very dark (black) residue inside the tank where the water level was. I asked my friend about this and he told me the water testing had indicated a very high potassium level in the water. I asked him if this was safe, a safe level to consume. He just shrugged and said they never worried about it.

I just looked up potassium on Google and apparently excess can cause kidney stones. But then, apparently, so can spinach and rhubarb and a host of other foods or food contaminants.

My only question is: Why didn't you just demolish the old outhouse when you started building on the property? Was it sentimentality? You could have built yourself a dandy little shed for the garden tools, or even have ordered one of those prefab jobs--without going through the awkward task of trying to retrofit this old shack.