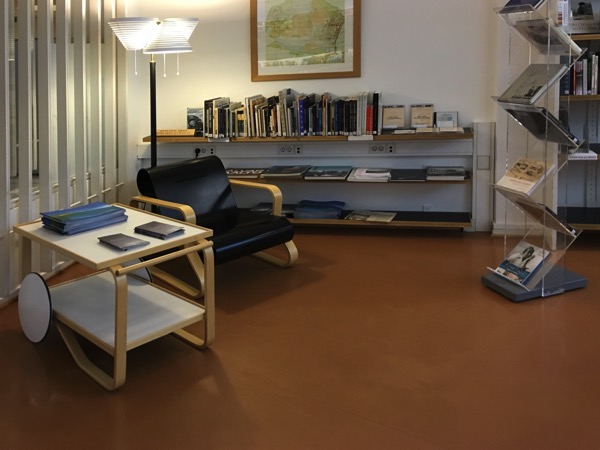 Prinseneiland, January 4, 2016—
HERE YOU SEE, rather stretched horizontally in a desparate attempt to fix a perspective problem, one of the most affecting sights I saw last month in Rovaniemi. It's a small corner of the Rovaniemi City Library, one of three central public buildings designed in the late 1950s by the great Finnish architect for the rebuilding of the northern Finnish city, the provincial capital of Lapland, left in near-total destruction at the end of World War II.

The rolling table, the armchair, and the lamp are Aalto's designs. The books on the shelves and the table are about him, and you're welcome to sit in this comfortable chair under this practical reading light and browse through them. Everything is calm and orderly. I think it must be difficult to harbor disorderly thoughts in such a setting. The function of visual clarity and orderliness in public settings is the encouragement of civic and civil ease and order.

The principle of free design is one of Aalto's trademarks and the predominant theme of his library design is social equality. Aalto designed his libraries as low-lying, people-sized buildings with unadorned entrances. 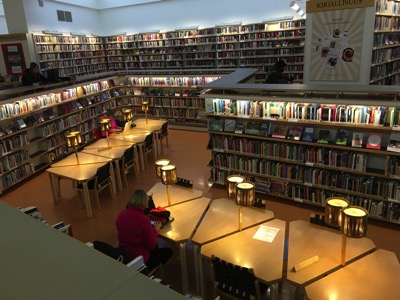 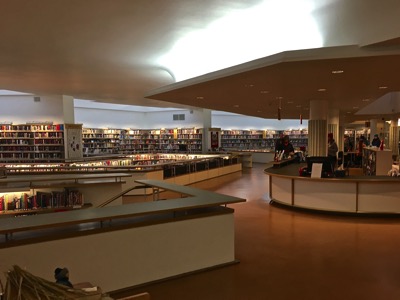 The ancient amphitheatre theme of the Rovaniemi Library is metaphorically transformed into a fanlike open book.

In the libraries designed by Aalto the lending department is divided into two levels. The reading bays offer peaceful places for study with natural light from the skylights. The common service desk in located on the upper level. 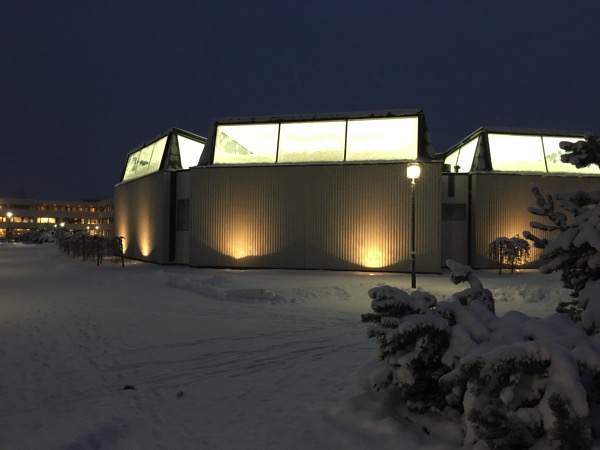 From the outside, the skylights resemble blocks of ice. Inside they join the lowered ceiling with an elegant arch that reflects the natural light. The indirect light is gentle and does not produce shadows.

The library serves some 180,000 people, a third of whom live in Rovaniemi. (Finnish Lapland, the northern half of the country, is very sparsely populated.) We spent a fair amount of time in this library, investigating its various departments, staying out of the cold, waiting for our night train to Helsinki. The library is not wheelchair-friendly: various reading bays and specialized shelving are at different levels, three or four steps up or down, reinforcing the feeling that while one can concentrate undistracted on one's reading — or writing, or studying — one remains connected to the entire system. 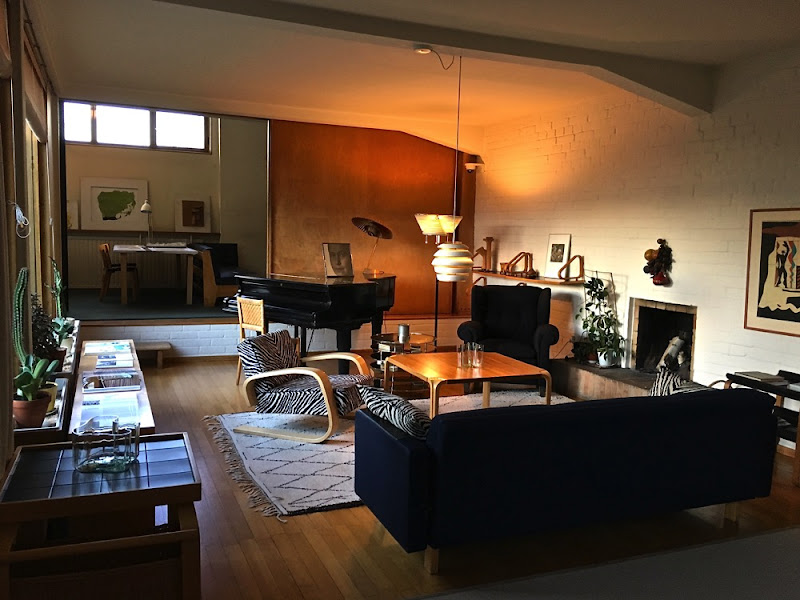 Here is the living room in Alvar Aalto's house in Helsinki, built in 1936. The house is surprisingly small, but includes four components: a studio-office with drawing tables for eight draftsmen and Aalto himself (separated from the living room by the large sliding panel at the back of the photo); the semi-public living room, for gatherings of friends and perhaps close associates; the more private sitting room and bedrooms upstairs, also now open to the public; and perhaps two servants' rooms and the small kitchen, which we were not able to tour. 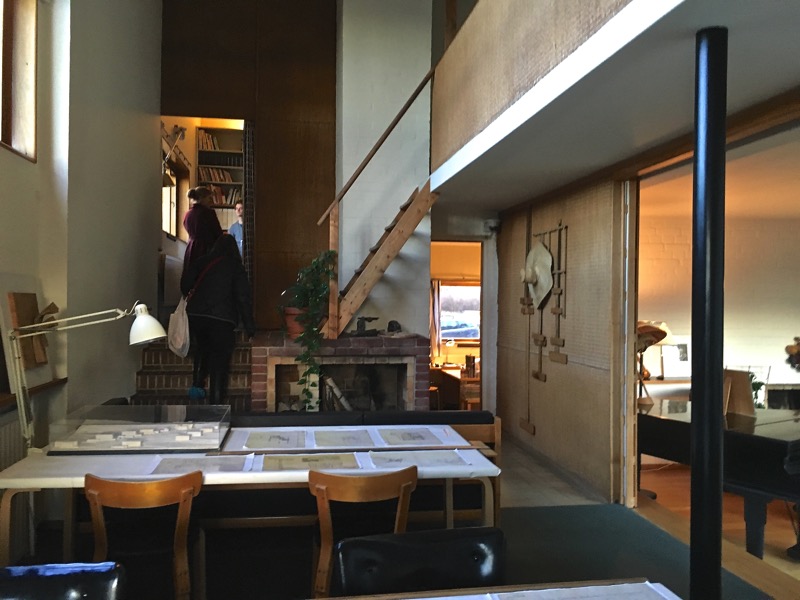 The studio, seen here from Aalto's desk, has its own entrance, through a small office seen at the back of this photo, behind the silhouetted standing figure. There's also a small library, attached to the office. The high windows face northwest. The steep ladder-staircase at the back of the photo rests on an open woodburning fireplace; it gives access to a narrow gallery along the top, perhaps for observation of the draftsmen; perhaps display of drawings…

We were particularly taken with the private rooms, upstairs: two or three bedrooms, a guest bedroom with a small couch, and a small sitting room with two armchairs, a settee, a credenza, a small table, and a low brick fireplace.

The house is open to public tours; it's located at 23 Riihitie. Google Street View shows the house beautifully, softened by lilacs and vines, and featuring an interesting detail: the garage door, slightly popped out, I suppose to accommodate a car longer than the one originally owned…

We didn't make a concerted effort to seek out further Aalto experiences; there wasn't enough time. You could profitably spend a month or two studying architecture in Helsinki alone. What particularly interests me, at my age and in these times, is the extent to which rationalist planning and architecture can contribute to a well-ordered civil society operating smoothly on the technological level — including transportation, communication, and distribution — while encouraging both such public arts as opera, theater, music, and museums and private opportunity for cultural, intellectual, and physical development.

I think an undercurrent of my own response to Aalto is my curiosity about the extent to which its "Scandinavian" feeling is incorporated into the Modernist aesthetic, or vice versa.

Scandinavian design is traditionally regarded as lean and clean, qualities which seem to accord with a cold climate. Is Scandinavian culture drier, more "rational" than indulgent? Do harsher climates metaphysically clarify and harden forms and textures and surfaces?

Elegance is defined in many ways. When I was young, I associated the word with extravagance, richness, elaboration, even excess. The Baroque is excess realized. But elegance can also be purity. Mozart is elegant, just as Brahms is, but in a different way. Sibelius captures the "clean" elegance in his music.

Does Modernist design fit in a cold climate, where lots of glass and thin structure makes less sense?

The house I always remember of Aalto's is the Maison Carre in Bazoches-sur-Guyonne, France, a horizontal design on a bluff overlooking water. It seems to be a response to Corbusier's early villas outside Paris, seen through "Scandinavian eyes".

I'm particularly attracted to the Scandinavian inflection of Modernism; it seems more humane than the boxy Bauhaus version, and less controlling, even arrogant, than le Corbusier's. If climate affects the Scandinavian temperament in a manner to influence design, architecture, and planning, I think it is simply through its tendency, over the centuries, to encourage citizens to cooperate, to see the general and social good as more telling than individual choice.

As to elegance — for me it almost demands clarity, order, the harmony of small proportions. Luxe, calme, et volupté has little to do with the baroque.