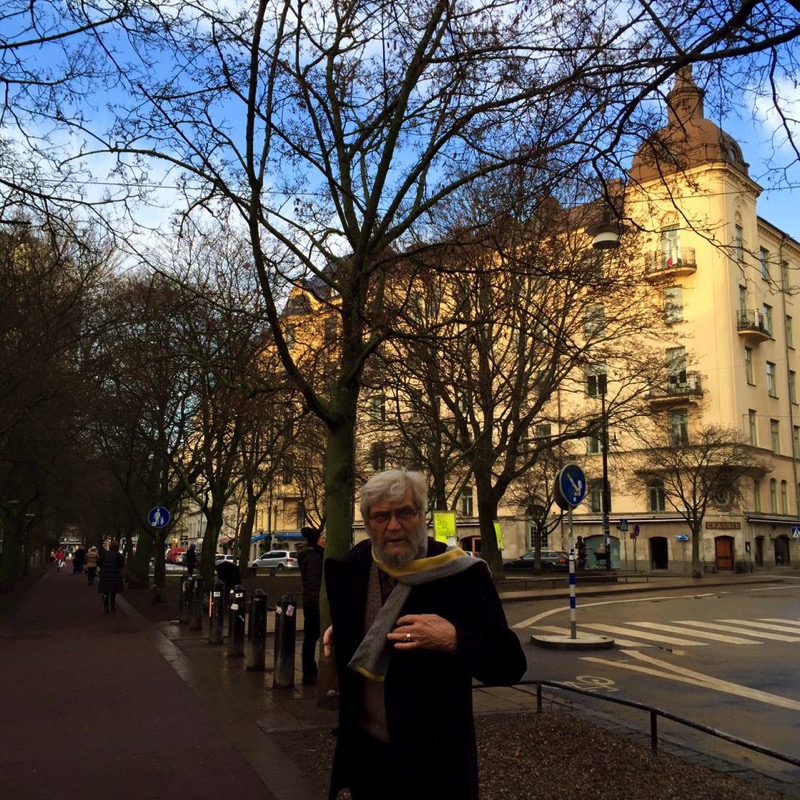 Prinseneiland, January 4, 2016—
THE PEACOAT has served me well. I bought it at least fifty years ago, in the mid-sixties, when peacoats and paisley shirts and corduroy trousers were all the rage. I bought it used, furthermore, in the Berkeley flea market. I don't recall what I paid for it; probably no more than ten dollars. I've never seen any reason to replace it.

I have other cold-weather gear, and I brought just about all of it with me on this trip. Two other jackets, for example, to wear under the peacoat if necessary. Even at minus twenty degrees (Celsius: equivalent to minus four Farenheit), and in a biting wind, I've yet to put one of those jackets on. I'll probably leave one of them here: I'm sure someone will put it to good use.

This photo was taken in Stockholm three weeks ago; it wasn't particularly cold, and the coat is unbuttoned. Now I'm wearing it buttoned; sometimes all the way up to the neck. Made of finely woven Melton wool broadcloth, it turns the wind perfectly. Under it I wear the proverbial layers: a sleeveless wool sweater my talented companion knitted for me, also wool; a tightly woven cotton dress shirt; a synthetic tee shirt of some sort.

At the neck, a mink throat-cozy my daughter knitted for me. Sometimes a dress scarf from a street merchant in Rome. Always, and in this photo, a marvelous alpaca scarf my talented granddaughter made for me.

I nearly always wear a hat — this photo is misleading in that department. In the frozen north I wore a knit stocking cap pulled down over my ears; since coming to the Netherlands the wool beret has been sufficient. And then there are the gloves: I brought a favorite pair of tight-fitting synthetic ones, but of course I lost one in Helsinki, the right one: I'd pulled it off to use the phone, and my numb fingertips must not have noticed its sudden surrender to gravity.

For a few days I walked around awkwardly, scrunching the cuffs of the peacoat sleeves and thrusting them, along with my cold dead hands, into the pockets. Pockets: iPhone, extra iPhone battery, its cable, another iPhone battery, hat when inside and too lazy to fold it under my belt, tramcard if I'm careless, handkerchief, neckband if it's warm: amazing what these pockets will hold — handy when going through security, by the way — but the already heavy peacoat becomes pretty unwieldy, especially when that long scarf is threaded through its sleeves preparatory for the garderobe at museum, the coatrack in the restaurant… 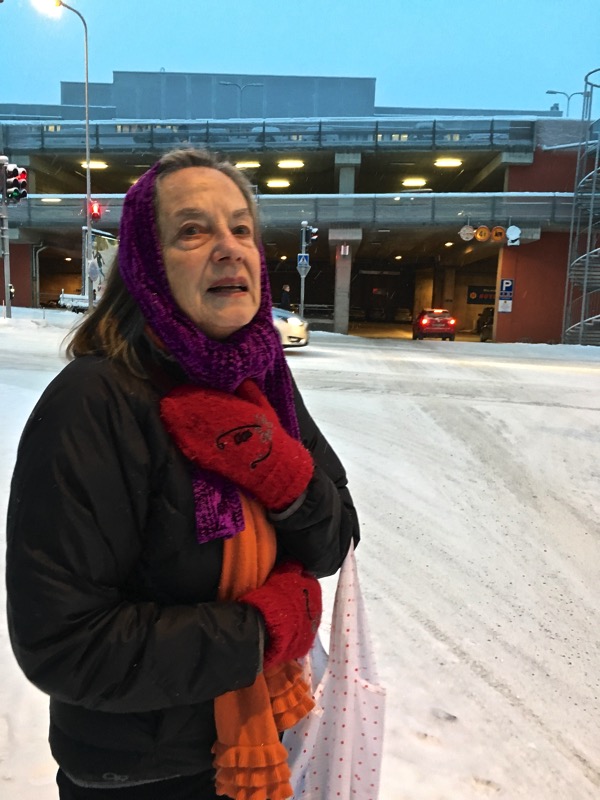 Oh, yes: below the belt. Usual undershorts; long johns; long knit socks (also family-knit), normal walking shoes. In Rovaniemi, on ice and snow, I noticed the locals mostly wore trainers. My leather soles were treacherous, of course, but I only slipped and fell once.

My companion the Contessa dresses similarly, though she persists in avoiding hats. It's one of the few sources of continual domestic discord, and I think, privately until now, that her distaste for hats has been aggravated by my fondness for them. In Lapland she did go so far as to wrap her scarf around her head to protect her ears. I was surprised to find myself developing a new attitude toward hijab — I wonder, for example, if the presence of sand in the air may not have had something to do with its development. There was no sand in Lapland. 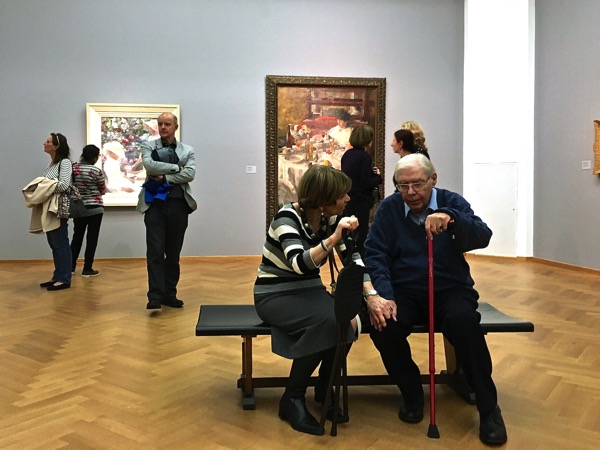 How do the locals dress? A photo taken in the Gemeente Museet in The Hague may, um, address the question. They've all checked their outer garments at the garderobe, of course. (This is one of the reasons you don't stay in a museum until closing time: the crush at the counter is good-humored but time-consuming.)

These people are in a gallery devoted to a major temporary exhibition, Kleur Onketend (Color Unleashed), truly a marvelous exhibition of paintings (and a few surprising very early color photographs!) by European masters, many neglected, working between say 1880 and 1930, and they — the museum-goers, I mean — are dressed like the intelligent, leisurely, complacent people they (and we) are. 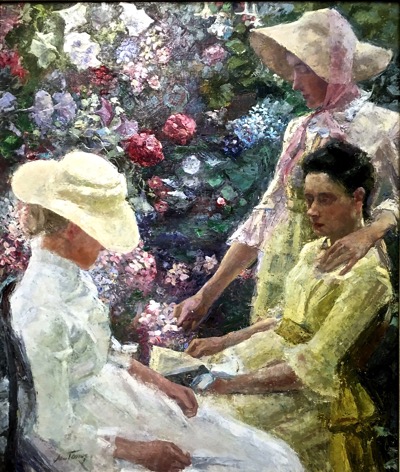 They contrast, of course, and not only because of the season, with the three ladies in Jan Toorop's delicious Trio fleuri (1885), with their sunbonnets and light frocks. Reminding me that summer does exist in these countries, even in Lapland I suppose.

Returning to the present, another exhibition in the Gemeente Museet was devoted to the flourishing and often startling Dutch fashion industry. A brilliant example of curatorship, this Ode to Dutch Fashion provides fascinating notes on aspects of Netherlandish clothing, even beginning with distinctions among the more than fifty shades of black in 17th-century Dutch portraits (crow black, coal black, glossy black, etc.).

The show culminates, in the playful Dutch manner, with a room inviting you to take a selfie behind a full-size photo of one or another of the (much) more recent fashions. I forgot to take note of the designer of the natty white suit I seem to be wearing here; I'm pretty sure it's Viktor and Rolf, and I wish I'd had it for the anniversary party we attended in the provinces a few days before Christmas.

The ubiquity of camera-phones — here in Netherlands, almost exclusively the iPhone, it seems — has apparently led to museums throwing up their hands and dropping the no-photography rule. (Disable your flash, of course.) So I happily snap away, usually taking care to photograph the label as well as the painting. This blog post is not about art or museums; it is about clothing; so I won't go further into the frequently disturbing subject of photography at the moment.

Instead I'll end with the juxtaposition of three parades of clothing. The first is of course from Ode to Dutch Fashion: five of what must be over one hundred striking ensembles, almost any of which could be worn on the street — though perhaps not in this weather. 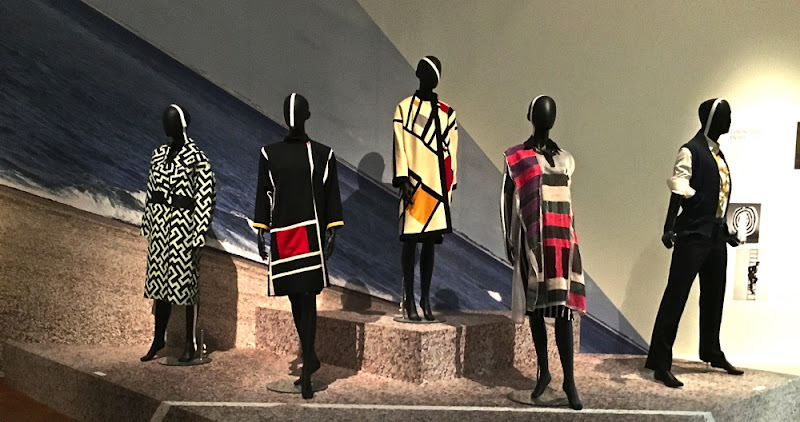 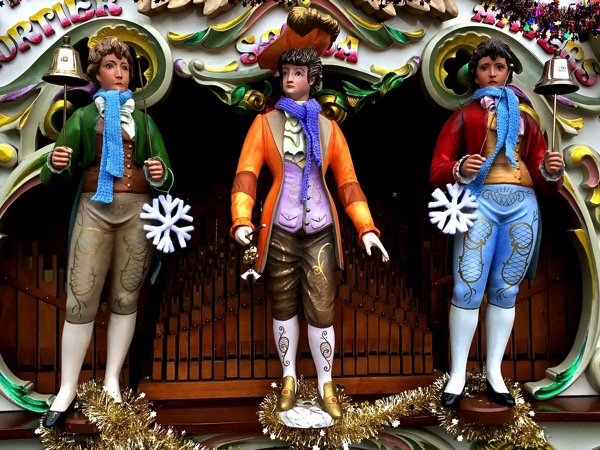 The second is of a trio of dandies from the 18th century, I suppose, carved in wood I hope, though, who knows, closer inspection might reveal them to be plastic reproductions. They stand stiffly but gracefully on the front of a draaiorgel, a street-calliope, and rhythmically and discreetly strike their bells at certain points in the performance.

Finally, there is a group of contemporary Netherlanders standing out in a parking lot across from the draaiorgel. They are waiting to have their photograph taken by the professional photographer who is standing at the left, checking her camera. The group family photo is for an important occasion, and they are dressed carefully, with the casual perfection (and, in some cases, playfulness) I've come to associate with the Dutch in general — partly through my very grateful forty-year relationship with a remarkable family. I hope they will not mind my revealing them here.

Posted by Charles Shere at 1:20 AM

The question about Islamic clothing styles is pertinent now.

The rag and the veil and the robe all seem to have come into use during a period when Islam was in its infancy.

The eccentricity of wearing veils may indeed be their utility against sand storms, or cold winds.

But today these prescriptions have hardened into draconian pronouncements--requiring obedience at pain of injury or even death.

Last Saturday, we saw a woman at Berkeley Bowl--where we now do all our food shopping--in a full length purple burqa and veil with just a slit across the eyes. She was speaking with a companion, and seemed to be having trouble moving her lips against the fabric. It seemed so ridiculous--a woman in America wearing an outfit more suited to the sands of Araby than the streets of Berkeley. This is where religious duty and American common sense collide.