Three photos from the window 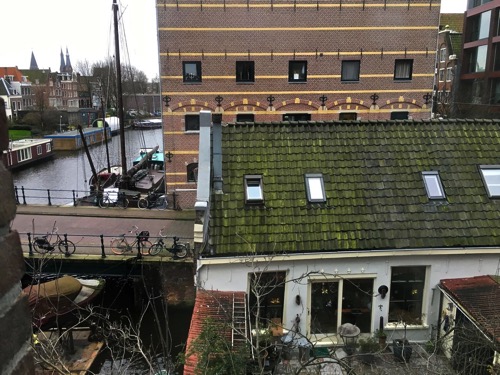 I HAVE BEEN WRITING here recently about the pleasures of orderliness and clarity. The opposite has its attraction too, of course — in fact the greatest pleasure may come from the tension between, or the mediation of, both: disorder and clarity. And so I give you three snapshots out the side window of the room I have been working in. 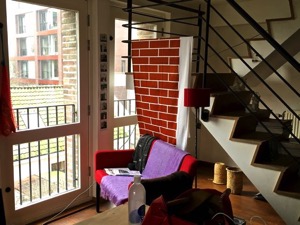 It's a big, comfortable work room, well lit by this window and another, to my left, on the adjacent end wall. I sit at a long table, six feet of it desk, another six feet bare worktable; in front of me and behind me, on the long walls, rows of bookcases.

But I'll write another day about this apartment, and other places we've stayed in on this visit to The Netherlands. Dutch interiors are interesting enough for their own post. For one thing, they exhibit that kind of orderliness I've been taken with recently. Today let's look out these windows.

I think this is my favorite corner of Amsterdam: the Westelijke Eilanden — "western islands" — built beween 1610 and 1615 to extend the Amsterdam harbor, in those days on the Zuider Zee.

Look at the back of your left hand: the thumb is curling toward Amsterdam's Centraal Station; the index finger is a thin peninsula to the west of what remains of Amsterdam's harbor on the IJsselmeer (the former Zuider Zee); the little finger is another peninsula. The short ring-finger is our island, Prinseneiland. To the north of it, spanning the tips of the middle two fingers, is Bickerseiland, named I suppose for Gerrit Pietersz Bicker (1554-1606, since his son Andries was living when the islands were raised, and it would have been inappropriate to name one for a living person.

The far island, at the north end, spanning the three fingers, is Realeneiland, "island of the reales", named for the Spanish coins: for the Bicker family sent plenty of silver to Spain, and other supplies too, and were paid I suppose in reales. The name of the restaurant De Gouden Reael, housed in a 1648 building on this island, records this.

For centuries these islands housed small warehouses and workshops related to the shipping trades, according to Wikipedia. They stored products coming from the middle East and the Baltic: grain, tobacco, wine, salt, herring, anchovies, tar. By the late 19th century, though, ships had grown too big to harbor here, and the islands were all but abandoned. 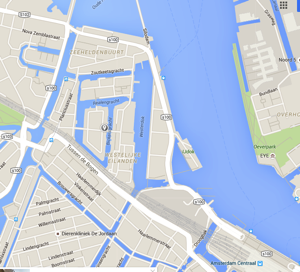 In the housing crisis following the end of World War II they were discovered by artists and intellectuals; a new wave of gentrification has begun in the last few years.

But the three small islands retain their character, as can be gathered from these photographs. The canals are lined with old sailing ships, barges, and skûtsjes in varying degrees of decrepitude. Some have been converted to residences, their decks and canalside terraces often gardened. Old architecture stands next to newer buildings: in the third of the large photos here you can just see a 17th-century warehouse between the high brick building on the left and the new town houses on the right.

The canal at left in the top photo is the Bickersgracht, and the street leading from the bridge (unseen to the right of the photo) is the Galgenstraat, "Gallows Street," which bisects our island. In the old days, if you stood on this street and looked east, you'd see corpses hanging like laundry, apparently on that index-finger peninsula. They were the bodies of criminals executed on Amsterdam's main square, the Dam, and "then brought by boat to Amsterdam North, where they were hung, visible to everyone as a deterrent… left hanging until the ropes were destroyed or damaged, pecked by crows." (I don't recall where I got this quote.) There was a movement to rename the street after this practice was abandoned, but "Middle Street" never caught on.

The only other street is Prinseneiland, which encircles the island. 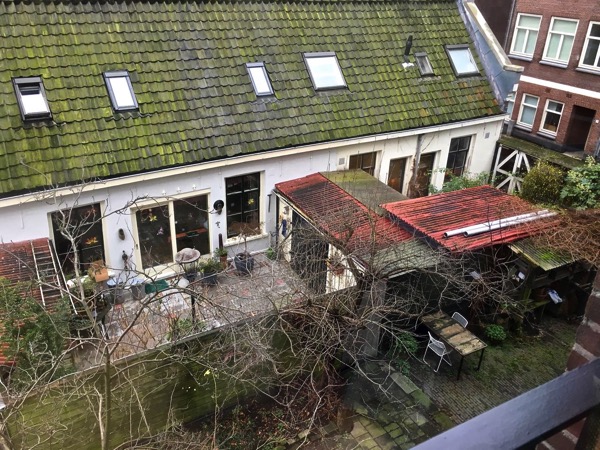 THE OTHER DAY I looked out the window to see a figure at one of these skylights, apparently a woman struggling with a stepladder. Inside the building, I mean. She finally got it into position and carefully climbed it to wipe the skylight clean. She looked in my direction, but I don't know if she caught me watching her or not. It's a Dutch thing to sit by the window and watch whatever happens. In many windows you'll see lace cloths stretched in carved wooden frames, set into the window to hide the observer from the observed. Most Dutch windows are left uncurtained, though: it wouldn't do to look as if you were hiding something.

As bad as the weather can be, the Dutch like outdoor life. The table and chairs under the rusting iron roof are probably used at lunchtime even in the rain. The other day we walked past a park-cum-playground on Bickerseiland, and saw, at dusk, about four o'clock, two couples, in their fifties I'd say, sitting around a bonfire they'd made, conversing over tea or coffee.

Since smoking has been prohibited in bars and restaurants you'll see tables and chairs outside most cafe doorways. There'll be an improvised roof against rain, perhaps, and often there'll be blankets on the chairs. Amsterdam in January is one of the coldest places I've ever visited, almost as cold as the arctic circle, because the cold is damp, and there's often a stiff breeze. Good sailing climate. 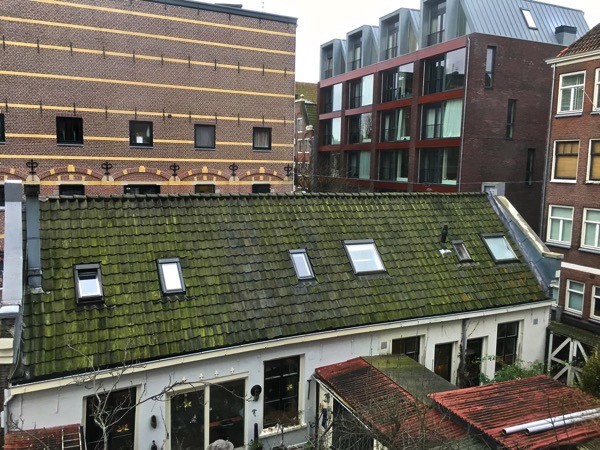 I love looking at the complex disorder of these buildings. Buildings, ships, streets. On the "mainland," among the famous five horseshoe-shaped canals defining old Amsterdam, especially on the five canals, the rows of houses are proud, clean, and orderly. Each was built quite consciously, I think, to take a proper position among its neighbors, apparently modest yet clearly intent, often, on showing up the others: a gable a little more baroque, a stoop a little more ostentatiously plain, sober decorations just a tad eccentric. But here on the western islands pride gives way to practicality, and things have been built, and continue to be built, more as they must, for whatever architectural or economic reason, than as they might.

Well: I titled this post "Three photos from the window." Here, to close, is a fourth photo, of the building I've called elsewhere "our Einstein-on-the-Beachy blocky building" on the Bickersgracht. The window I've been looking out is on the left side of the building, second floor (third floor American style). It's twilight, just before five o'clock, and perfectly still; time for an apéritif… 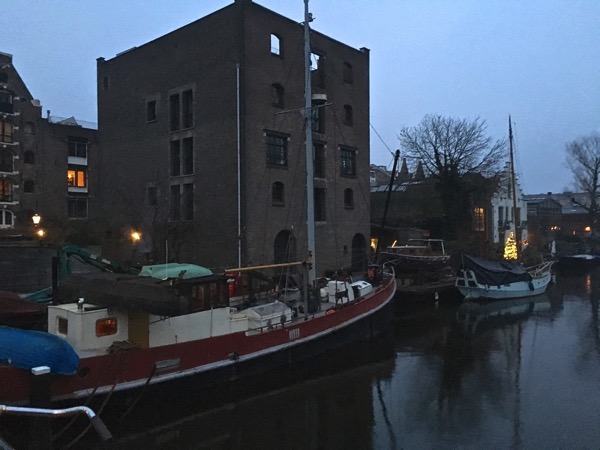 Posted by Charles Shere at 2:42 AM

Wow! Thank you for this.