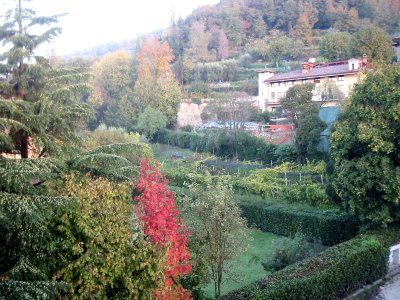 Outside our room, Ca’ Rossa, Bergamo

Not that long ago, not a week ago in fact, a fellow I hadn’t met before looked at me appraisingly and said, after some reflection, I think you’re Dutch.

I was pleased. I’d rather be Dutch than almost anything. He was sitting at the next table at Marius, when we had dinner there last Saturday; we’d struck up a conversation; then been introduced (by Kees, the chef, who’s known both of us for many years). In the course of the conversation I’m sure I’d revealed my enthusiasm for the Dutch at great and possibly boring length. I’d also revealed my insatiable curiosity about words and languages; and he was a little surprised at all this, and asked whether I was Dutch. No, I said, I’m from California.

I never identify myself as an American when traveling in Europe, especially not these days. I just don’t identify with that many aspects of American life that distinguish my country from European ones. Besides, there’s always the secret desire for California’s secession, for its reversion to a California Republic with room for Easterners, Mexicans, Native Californians, and the return of the original wild life. So I call myself a Californian, for that is what I think I am.

But though I am a sixth-generation Californian on my mother’s side, I am of unspecified origin on my father’s. My father’s father was adopted; his own father — whom I dimly recall having met when I was five or six years old — was a man by the name of Charles Smith, or so he said; and the family legend is that no one knew where he came from: he just showed up one day, a full-grown man with the surname Smith, and a manner that discouraged questions about his origin.

The family has always assumed he was Irish or English, but I don’t know that there’s any real reason for that. Clearly he wasn’t particularly Asian or African, and I doubt he was Mediterranean. One day perhaps I’ll have one of those DNA tests and find something out, but it doesn’t seem worth the trouble and expense.

Particularly now that I know on good authority that I am Dutch. The guy at the next table would have known: he knows the Dutch, and he looked pretty hard at me.

But yesterday we flew in a little over an hour from Amsterdam’s Schiphol airport across the dark Bavaria and Switzerland to land at Bergamo, in northern Italy; and when we got out of the plane and heard the Italian and saw the people and sensed the warm air and saw palms and olive trees and especially when we checked into our B&B and saw out our bedroom window the walled garden and beyond it the dark forested hillside climbing up north into a midnight blue sky I thought to myself: come siamo beati, essere qui in Italia; how blessed we are to be here in Italy.

What is it? Something in the air, I suppose, that I associate with Pleasure. Our landlady was there to greet us at the airport and drive us to our B&B, the Ca’ Rosso, a couple of kilometers outside Bergamo. We stopped to pick up some laundry and have a chat with a friend or two, then drove right through the old Città Alta, the fine old stone heart of the city perched on a hill; then down the other side and into the country.

The house was casalinga, as the Italians say; “homey.” A big sitting room, where we had breakfast the next morning — yesterday morning — featured an enormous fireplace and hearth occupying an entire end of the room; paintings on one long wall; a series of French doors giving onto a narrow balcony on the other, with a view of the Città Alta. Our bedroom with its large private bathroom was off to one side, its window looking toward the hills toward the north, black and mysterious when we went to bed, the many colors of autumn foliage when we got up yesterday morning, for the hills are covered with oaks and other deciduous trees; I can imagine the hunting is good in there.

Our landlord took us to the bus station next morning, where it was easy and convenient to get a bus back to the airport. From there another easy and convenient (and inexpensive!) shuttle-bus took us the 50 kilometers to the Milan train station; and there we bought tickets on a fast train to Torino, and a taxi got us easily to the next hotel.

So far, so good. I’d been able to give advice to a young English couple on the bus to Milan: there’s a nice hotel on such-and-such street; try to make lots of use of the trams; be careful of pickpockets around the train station. I’d been able to get by in Italian with our landlady, whose English was rudimentary. Transportation went easily and comfortably. I’d even hooked onto someone else’s wireless in our Bergamo bedroom.

But there is a dark side and a light side to everything, even Italy. I’ll get right to the point: this afternoon I made another of my infrequent unwilling contributions to the more just redistribution of property. We were riding the number 35 bus to the Salone, about noon on Saturday, standing on a terribly crowded bus, and when at one point I looked down at the canvas shoulder-bag in which I carry too much stuff I noticed it was unzipped, and my handheld computer was gone. This is very annoying and has put me in malumore, into a bad mood.

The thing was old and obsolescent anyway, a Palm Tungsten T that I bought a couple of years ago, on sale because it was being discontinued, to replace an earlier one that I’d similarly lost in Italy — through my own fault, when I left it on a seat in the Rome subway. I’ve been wanting to replace it. But I count on it daily for address book, journal, expense journal, dictionary, and any number of things.

Fortunately, as luck had it, I’d backed it up completely just this morning, so no information is lost to me. But for the next three weeks I’ll have to make due with pen and paper, and I’m long out of that habit. And I have that soiled and stupid feeling one has when one’s been robbed or violated: how could things have been different; why did we get on so crowded a bus; why wasn’t my hand on the bag (because one was on my wallet, and the other was hanging onto the bus-stanchion as we negotiated the bumpy streets and abrupt changes of speed and direction).

THIS MORNING ON THE TELEVSION that brash silly toothy Englishman on Saturday Morning CNN was interviewing some supercilious ranting art critic about the relevance of contemporary art, and then he had the uncommon decency to speak for a few minutes to someone with a different point of view, a practicing artist in fact, who struck me as calm and reasonable in his defense of abstraction and such.

I don’t mind, the artist said, if such establishmentarians think what we do is rubbish and has no right to exist, that’s their opinion and I respect it as such, but they have to give us our place and our right to a different point of view, and sometimes it takes a pretty accurate slingshot to deal with the Goliaths of the establishment.

Then I turn to a recent copy of The Nation and read Katha Pollitt’s “Single-Issue Solipsism,” arguing against “non-partisan” single-issue commentators who back Republican nominees who seem to favor that single issue against Democrats who perhaps don’t — even though, as Pollitt points out, that single issue will go nowhere as long as the Republicans maintain control of congress, because the exceptional candidates these commentators like are mavericks in their own party.

And here we are at the Salone del Gusto, which is good-humoredly excoriated in La Stampa for its commercial exhibits featuring walls of plastic facsimiles of wheels of Parmesan cheese and whole prosciutti. Not to mention the inclusion of more than one AutoGrill in the cavernous exhibit hall at Lingotto, for the AutoGrill is the perfect symbol of Fast Food: it’s the place you duck into when you pull off the freeway in Italy, intent on another quick espresso, or a ham-and-cheese panino to stave off hunger, or perhaps a teeny shot of grappa to soothe the highway nerves.

This is our fourth Salone del Gusto, I think, and perhaps our last. We are as enchanted as ever with the exhibits: oils and vinegars, honeys and marmalades; cheese of every description, ditto sausage, ditto bread and pastry; sweets; pastas; beer, cider, stout and perry; wines from every corner of the globe. But we’ve seen this all before, and the Salone is for the younger. It gets more crowded every year, for one thing: this time we made the mistake of coming for the last two days, not the first two; and the combination of press attention and weekend leisure has made the floor extraordinarily crowded, hard to move through, and of course noisy.

Nor did we choose this year to attend any of the wonderful “taste laboratories,” for in the last three incarnations of the Salone we’ve pretty well done them all, studying most of the categories listed above in considerable detail.

But we have enjoyed ourselves, and tasted some very wonderful things — a fine liquore from Croatia, flavored with hips of the dog-rose and wild plums and who knows what else; a magnificent Castelmagno cheese from a nearby alpine pasture; subtle lemon products from Sicily; exotic grains from the Andes; an exceptional ice-wine made from apples, of all things, in Quebec, of all places.

Best of all everyone at the Salone seems to be in a good mood. The producers are proud of their work, and rightly so; and pleased with the response they get, and little wonder. The man who made the apple ice-wine said, when I asked where I might find it, Oh, just about anywhere, Whole Foods, and Costco, and...

All those terrible places? I asked, with a smile, and then added Well why not, there’s no point making it if people can’t get it; and he said Well, I just sell it to my distributor, and he finds places for it; I have to sell it if I’m going to be able to go on making it.

I think the more cynical criticisms of the Salone and of Slow Food generally, that it is sleeping with the enemy, that it’s going too “commercial,” are misplaced criticisms. If you’re going to improve the world well then you have to work with the parts that need improving, that’s obvious enough.

And most of these guys seem to have accurate slingshots, and a lot of patience. My money’s on their side of the equation. I just wish my handheld computer hadn’t switched sides.
Posted by Charles Shere at 9:07 AM