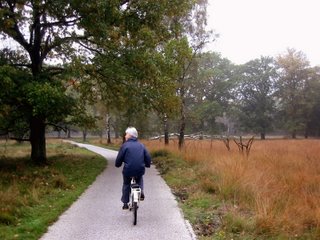 A DAY IN APELDOORN with our friends Hans and Anneke always involves bicycles; it can’t be helped, and to tell the truth we wouldn’t have it any other way. For seventy years that’s how they’ve made their daily rounds of their town and environs: op fiets. It’s one of the sweet peculiarities of the Dutch language that the usual word for bicycle is fiets. The “correct” word is, or was,rijwiel, and you still see that word occasoinally, but it sounds both formal and quaint, as “automobile” does to American ears. Everyone says fiets; and nearly everyone rides one.

So yesterday we set out about eleven in the morning, by auto at first, to the town of Otterloo, or was it Hoenderloo, I always get them confused even though the memory of ancient 78rpm Beethoven recordings conducted by Willem van Otterloo ought to serve as an aide-memoire, to spend a few hours at the Kröller-Müller Museum, one of my favorite in the world. The Museum, named for the married couple whose fortune collected its contents, is in the center of the national park of the Hoge Veluwe, a high heath-and-forest on ancient dunes in country that has been grazed, farmed, abandoned, hunted, and now cycled over the millennia.

It was a bracing day: the air soft but cold enough that we wished we’d brought gloves. We parked at the entrance and helped ourselves to free white bicycles for the few miles to the museum, riding an asphalt fietspad between forest and heath, admiring the colors, enjoying the air, amused by the frequent signs of rooting wild pigs, for the acorn crop is heavy this year. (The rooting of pigs, I decided, is The Invention of Agriculture: surely the first farmers got the idea of ploughing the soil from their observations of the results of rooting pigs.)

The Kröller-Müller is spectacular for four reasons: its architecture, which is modest but first-rate; its setting, which couldn’t be bettered; its collection, which features dozens of masterpieces and hardly a clinker; and the fact that the work was collected by and for a single pair of eyes. The only museum I know of that rivals it is the deMenil Foundation, but it has the disadvantage of being in Houston. Mrs. Müller (or was it Mrs. Kröller?) had better taste in husbands, or at least in the settings they can provide. And she had the advantage of living in a more exciting age, the first third of the Twentieth Century, when she could buy Braque and Picasso, Rysselbergh and Mondrian, Seurat and Monet; and when she was astute enough and quick enough to pick up the very best of Vincent van Gogh’s paintings.

I first visited this museum in the spring of 1973, when (as I mentioned earlier) I was on a press junket to cover the opening of the Vincent van Gogh Museum in Amsterdam. We art critics and travel writers were herded through a number of Dutch museums, but the Kröller-Müller was not one of them, and I think I know why: its collection puts the Amsterdam van Gogh Museum quite in the shade. (I was lucky to have been taken to the Kröller-Müller by Scott Keech, a friend and former colleague then in The Hague on a journalism grant.)

We were here last December with another couple of friends, Richard and Marta: at that time the museum building was being re-roofed and many of the galleries were closed. (One benefit was the temporary hanging of the van Goghs in very close and crowded installations, double- and triple-hung at times; the pictures set up quite a noisy conversation among themselves. On this visit they were much more sedate, keeping their distance from one another; but there was still plenty of energy in that vast hall.)

Since we’d been here so recently there was no need to take a lot of time. This visit was like seeing a bunch of old friends at a big party; you’d talked to them recently; you knew you’d be seeing them again when there’d be a better chance of deep conversation; it was more a matter of nodding to them agreeably in passing, mentioning a familiar shared memory or two, reassuring yourself that there was no real change either in them or in yourself.

There are a couple of standouts, of course: Seurat’s La chahut, Cranach’s Venus and Adonis, the entire high cubism room, the pointillist masterpieces. But there is also “M. Jacques,” the café named for a charming life-size realistic bronze of a complacent Belgian man in an overcoat, holding his hat in his hands behind his back, gazing up appreciatively but a bit critically at the sky. I like both the sculpture and the café.

And then it was time for a walk in the sculpture garden, to the two pavilions, one by the cubist Gerrit Rietveld and one by Aldo van Eyck, a more recent architect whose structure nicely nestles a number of stone and bronze sculptures meant perhaps to be touched, since the pavilion is dedicated to the physically handicapped; and then we found four different bicycles for the ride back, for the point of these white bicycles is that you take them where you want and leave them there — though only in the park, of course; the famous white bicycle experiment failed in Amsterdam, back in the 1960s, perhaps because too many people were amused at the splashes they made in the canals.

Among the van Goghs at the Kröller-Müller was The Potato-Eaters, which I mentioned the other day. The painting’s as ugly as I remembered, and smaller; and I didn’t recall having seen it last December. It was one of four van Goghs stolen back in the early 1980s: they were held for ransom, rolled up in the trunk of a car out in the parking lot, though they didn’t turn up for a couple of years; I’m not sure why. Security’s a bit tighter at the Kröller-Müller these days: I wouldn’t advise trying that again. 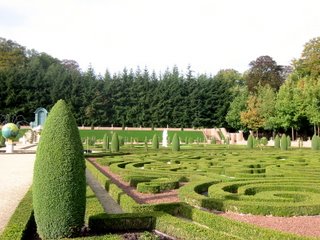 TODAY WE WENT FOR A WALK in the garden of Het Loo, the royal summer palace, the Dutch equivalent of the palace of Versailles. (Or, I suppose, though it pains me to make the analogy, of the ranch at Crawford, Texas.) It’s an amazing garden, designed in the high French baroque style, drastically changed in the early 19th century (it was buried in several feet of sand), then rediscovered forty years ago and set back in order.

This is a perfect time to see it, as it has just received its semi-annual clipping. The box-hedges are crisp and even, and the cypress and yew, formed into bullets as tall as me alternating with spheres about three feet in diameter, guard the edges of the generous parterres like so many complacent chess-pieces. The purpose of such geometrical precision, I read many years ago in a landscape-architecture article (in that marvelous periodical Pacific Horticulture, if you want to know), is not to impress the viewer with the gardener’s virtuosity, but to quiet the viewer’s mind with abstract formality; and this is particularly the case in a setting like this, where the more natural groupings of huge elms, oaks, and beeches — some of them three hundred years old — is seen beyond the garden walls; and where the entire installation is an exercise of national, even governmental intent to instruct the citizenry, to offer to it an example of discipline, restraint, and co-operation.

It was odd, later today, to contrast that with a new museum-library-conference facility the municipality has erected near its commercial center. CODA — the name stands for cultuur onder dak something-or-other starting with “a,” culture united under [one] roof — is an exercise in civil generosity, I suppose; its heart is in the right place; it has a nice little café, a series of conference rooms for public use, a computer lab, and the town library; as well as the obligatory rather large gift shop offering engaging, attractive, and generally useless dinggetjes as the Duch say — “thingies.”

Well, you can see where this is headed. The substance of century-old groves, of formal gardens that work their way through generations of changing taste, of a plain but elegant and quite large palace, can’t help but contrast with the plate glass, plastic curves, computer screens and rows and rows of historical novels. I keep thinking something crested a few decades back and has in many ways — not all, I certainly grant you! — has declined a bit in the years since. But who knows, the pendulum may swing back: let’s preserve what’s left of the best for future generations to cherish and consider.

and now we are in Torino, in a nice hotel for the next three days, and off soon to the Salone del Gusto...
Posted by Charles Shere at 6:20 AM