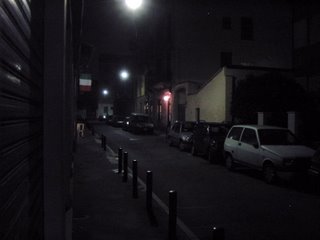 
AT THE CENTER OF THE PHOTO, there, behind the doorway under that bright circle of light, is a restaurant we’ve always wanted to try: Antiche Sere, whose name translates, I suppose, to “Evenings of Yesteryear,” except that such translations always sound forced, formal, old-fashioned in American English, though they are perfectly ordinary everyday expressions in French, Italian, Dutch, Spanish.

The guidebooks have always listed it as a perfect place to find the traditional cuisine of Piemonte, that interesting province in the northwest of Italy — an analogue, I suppose, geographically at least, of the Pacific Northwest in the United States. (Bearing in mind the huge difference between the areas of the United States and Italy, which is less than twice as big as California.)

Lindsey’s father was born in a mountain village in a remote valley in the northwestern corner of Piemonte, and we — Lindsey and I — have always felt an affinity for this province. We are in Torino, the capital city of the province, not sixty miles from Chiomonte, where her father was born. And I firmly believe a taste for certain foods is inherited in the genes. In this case, potatoes cooked a certain way; peas of a certain texture; bagna cauda, gnocchi, agnolotti, Castelmagno, bonnet... the list goes on and on.

So tonight, after a hard day (I explained that earlier), we took a taxi out to Anitche Sere for dinner with an old friend, Nancy from Hawaii; and a newer friend, a friend of hers, Ellen from San Francisco; and an older friend, Deborah from Galisteo, or let’s say Santa Fe. All of them are here for the same reason we are: to attend the biannual meeting of Slow Food, involving the Salone del Gusto which is a quasi-commercial (or much of the time even a quite commercial) exposition of Food Products, and Terra Madre, which is a meeting of producers, farmers, fishermen, herders, and chefs who intermediate between chthonic, Slow, authentic, minimally interfered-with food products and the city-dwelling, evolved, civilized, often unaware people who enjoy those food products.

And here is what I ate (I won’t try to list the other items at the table):

and with these,
a liter of red wine
a bottle of Grignolino 2005
a glass or two, tiny ones, of grappa di Moscato.

The others had things like agnolotti, coniglio, insalate miste, and so on; and other desserts.

And how was it? Well, it was really quite good; indeed it was like eating at your grandmother’s house if your grandmother was or is Piemontese. Or Italian in general; or, probably, either European from south of the Rhine-Danube. The point of this food — the point of all true Slow Food — is that it is Clean, meaning that it avoids ingredients that are purely chemical and manufactured; Frugal, meaning that it uses all of everything available to its place, and very little brought in, and Good, meaning that, well, it tastes so good that whether you are hungry or not you use the bread to mop the plate before it’s gone. Pulito, giusto, e buono.

We took a cab which even though the ride seemed circuitous got us there in just a few minutes, so we took a walk in the neighborhood in order not to arrive before eight. No one dines before eight o’clock in Italy. We walked past cafés, furniture stores, one of those imported-gifts-from-third-world-country stores, a shop that cleans furs, a couple of clothing stores — that sort of thing. Clearly none of them were on the street in the photo: that’s a small side street.

Then we were in, to find Americans everywhere at table — Americans eat early here — and among them our friends, and we tucked in. And how was it? Well, it was really quite good. But as you may have gathered by now \p\pnostante how good it was, it was something like Lindsey’s cousin Rosa prepares on the rare visits we make to her in Chiomonte (and I take this opportunity to apologize for not visiting her this time; we’ll surely be there next time).

The gnocchi were tender little cubes of mashed potato in a nice tomato sauce with a dusting of grated Parmesan and a grinding of black pepper. The tunips and fennel continued the idea of eating in bianco, all white things; simply delicious turnips (which I usually find too strong) and fennel bulbs quartered, blanched in boiling water no doubt with lemon juice, then dressed with a light olive oil. The slice of veal was a modest one, off the bone, say three-quarters of an inch thick and about as big as my hand; it had been roasted with a bit of garlic and salt and came thinly covered with a thick reddish-brown gravy and a good supply of small quartered roasted potatoes. Again, oil, salt, and very discreet garlic were the flavors.

As for bonet — the word is Piemontino, the local dialect which is often closer to French than to italian — this is a difficult dessert to describe; I generally call it “chocolate pudding,” but that’s misleading. It came as a thick slice of a loaf of pudding, a sort of firm custard, like an Indian pudding, but with a layer composed of soaked ground-up almond macaroons, substantial and deeply flavored with chocolate and amaretto but somehow going beyond that, suggesting chestnuts and molasses somehow... it’s a dessert we like very much, but not, I think, for everyone.

We like Piemonte for its individuality; it is a state within a nation, with a distinct culture rooted in tradition and independence tempered by its cosmopolitanism. It reminds me of Savoy in France, and in fact Torino — Turin in France, and therefore England — was the capital city of the former kingdom of Savoia. I think Piemonte is also like northern California, with an economy that includes agriculture, manufacturing, commerce, and tourism; and gifted with a geography that could make it almost self-sufficient.

Like northern California, Piemonte is composed of separate regions each with its own mentality. Lindsey’s father was born in the Valsusa, fifty miles or so west of here; he didn’t learn Italian until he went to school, for the family spoke Chiomontino, the local dialect of the provincial dialect. Well to the south is the fine city of Cuneo, with its own surrounding valleys, orchards, vineyards, and pastures. To the southeast is the Langhe, famous for its red wines; to the northeast another area producing that fine arborio rice so necessary for Italian risotto dishes. And just north of the Langhe is Monferrato, which I think of as the Sonoma county of Piemonte except that it’s a bit more rumpled and much less given to that current agricultural fallacy Monoculture.

We go to Monferrato tomorrow and I’ll write more about it later. It’s time now to go out for breakfast...
Posted by Charles Shere at 3:06 PM