8 A Day in Torino 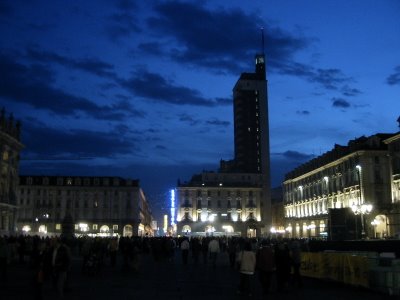 Six point four miles today on foot: that ought to walk off some of the cheese, meat, pasta, wine, pizza, grappa, bonet, and the like; and it’s sure as hell left memories in my knees.

Our hotel is a ten-minute walk to what I think of as the heart of Torino: the Piazza Carlo Felice, Happy Charles Plaza. Happy indeed am I there in general, and was today when we sat at a sidewalk table to take our breakfast — a croissant apiece, two cappuccinos for me, a latte macchiato for Lindsey — at the Caffè Roma già Talmone, before walking on up through the elegant Piazza San Carlo and on to the enormous Piazza Castello.

This succession of outdoor civic living rooms defines a sort of spinal column of the city, running due north from the main train station toward the sinuous river Dora Riparia which at one time formed the northern boundary of this ancient city. The buildings lining the piazzas, and the streets connecting them, were erected in the 19th century, and are all of the same height, furnished with the same sets of windows, and finished in the same stucco.

They also all project out over the wide sidewalks, leaving fine arcades underneath, with shops and cafés on one side, traffic on the other, separated from us pedestrians by the thick columns sustaining the storeys above — columns which like as not contain within them display windows for nearby shops.

At the Piazza Castello we turn left and walk another three quarters of a mile westward along the Via Garibaldi, a pedestrian street its entire length, similarly edged with uniform 19th-century architecture and furnished with shops and cafés, the occasional chapel punctuating the uniformity. Along the way there was a flutist in full 18th-century costume; a trumpet-and-guitar jazz duo, and a hopelessly inept player of the musical saw. (Or, better, unmusical saw.)

We were en route to the Diffuse Museum of the Resistance, the Deportation, War, Human Rights and Liberty. Diffuse it was not, today: it was incredibly focussed on an exhibition documenting Torino under bombardment in the second world war. We descended into a bomb shelter installed very deep in the ground under the museum, formerly a building housing offices and production facilities of a newspaper company which had built the shelter for its employees and their families.

We were fortunate to have our own guide who explained the entire setting to us, who led us into the long narrow barrel-vault chamber fitted with benches along one side, a tiny latrine at the end, air piped in somehow, and electricity furnished by a bicycle-rigged generator; and then we climbed back upstairs to take seats in a number of galleries where we sat face to face with life-size screens of people who spoke their memories of those terrible years. These were of course for the most part people our age. They described what daily life was like, the privations, the fears, the anxieties.

One woman told of finding a precious bit of butter somehow on the black market, being told by her mother to hide it in her room to save it for a special day, and looking for it to fry eggs for her father one morning, only to discover it missing; and seeing her mother weep for the first time when she discovered the butter had melted away.

Another told of the liberation, when she and others simply walked out of the prison camp in Bolzano, not knowing if this was a trick and they would all be shot, but the Germans had run away; and she got somehow back to Torino, and talked Fiat into giving her an ambulance so she could bring wounded Piemontese home from Bolzano, and finding her brother on her tenth and last trip, six feet tall and ninety pounds and recognizable only by his eyes. All the wounded she brought back died within days, and their deaths were meaningless, the woman said; we need not years but centuries to overcome the evils of those days, if we ever manage to overcome them at all.

Another man talked about the excitement and hard work of setting up the new government, when people of every political persuasion had to cooperate on drafting a new constitution. Every article, he said, required days of discussion; he was the one who took the minutes, and each article took hundreds of pages of them — except for one: an article which repudiated war.

It’s a hard word, he said, a “sculptural” one. It’s not We reject war, or we disapprove of war: we repudiate war. And it was unanimously agreed; there were six and a half pages of minutes. It was very quickly agreed. And you may say, well, you have to have a military for defensive purposes. But if you have a military you have soldiers and orders. What will you do if you are ordered to kill civilians, to drop bombs on their houses? What if you are ordered to use bacteriological or nuclear weapons? What if you are told to kill prisoners, or to torture them? We were all agreed: we repudiate this.

I was nearly in tears by the end of this, and wrote a note to add to the hundreds already posted by previous visitors in the exit lobby: Yes, and now it is all happening again, Amiericans are dropping bombs on civilians, people are being held without defense or trial, we can only hope that you Italians who remember so vividly that Second World War will be able to teach us something over the next generations, so that perhaps one day governments will all be truly civilized and will work not for death and destruction but for life and health.

And then we walked back along the Via Garibaldi — named for the uniter of Italy — to the Piazza Castello with its curious huge castle-building, dark and brick and Gothic behind, male and militant; and white and Baroque and stucco in front, feminine and beautiful. And then a pizza at a small restaurant, a good one; and then back to the Castello and its Biblioteca Reale for an exhibition of Dutch drawings from the time of Rembrandt.

What a library this is! Another barrel-vault of a room, but elegant, spacious, and well lit by natural light, and filled with books containing the history of Savoia, that wonderful mountain-and-piedmont kingdom now split between France and Italy, its fertile self-sustainability harnessed to two centrist governments which seem uninterested in the glorious culture that is here.

So once again a dialectic: bomb shelter and library. I read in the paper the other day something about the assumptions of the West concerning “developing nations,” that a kind of socio-political evolution will bring them inevitably (if slowly and at times against their wills) to the kind of culture and economy that obtains in Western Europe and North America.

It’s hard for us to believe, harder to understand, but there are places and peoples in the world who really don’t want to participate in this kind of engineered evolution. “We respect your position, but you must therefore respect ours.” And so it goes, on and on.

And tomorrow we break camp once again and go to I Mandorli in Monferrato, where the Internet may or may not connect. In the meantime there are more photos at dotmac.
Posted by Charles Shere at 4:15 PM