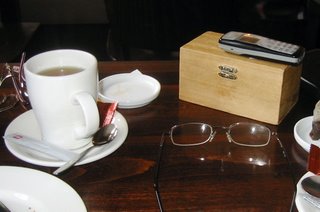 I WROTE ABOUT JORWERD here about a month ago, and I’ll write about that enchanting town again in a few days, when I’ve had time to catch my breath. In the meantime, you can see photos from the last couple of days on my dotmac page.

And here is what woke me up this morning:

An acquaintance, I might almost call him a friend, formerly engaging and sympathetic, let’s call him Ehrhard, had a few months ago suddenly become increasingly morose, spending long moments in a moody kind of distraction, silent and withdrawn, though given to occasional outbursts of apparently irrelevant excitement you might even call wild; certainly uncontrolled.

This made his company increasingly unpleasant, and I saw him less often — particularly as he now rarely sought me. Or, as far as I could tell, anyone else; though to tell the truth he’d never been one to spend an hour with more than one other person at a time. One didn’t know how he supported himself: he was bookish, talked on a number of subjects, was well informed but not particularly opinionated, and pursued a few curious interests with enough expertise and dedication to make use of public and institutional libraries, which was where I first met him. His showed little desire to entertain himself, but did occasionally seem to need an hour or two in a cafe where we met as if by chance, sitting at a corner table over a bottle, spending time in quiet conversation about history or poetry, music or theater.

But it had been some time since one of those chance meetings, and even they had grown uncomfortable, beset by moody silences and odd interruptions; and for months I’d only caught glimpses of him on the street where he’d be walking faster than usual, his eyes on the sidewalk, purposeful.

One day though I found myself in his rooms. He was seated at a small round table, a white cloth spread on it, its edges hanging down revealing an embroidered figured border, the window behind his left shoulder throwing a soft light, filtered by gauze curtains, on a curious box or chest centered on the table. The room was otherwise dim, its features indistinct. I sensed the presence of another person seated on the second chair at the table, but did not actually see him: only the chair was there, a plain wooden chair with a thin cushion in broadly striped sateen. I stood as if unseen a little distance from the table, invited I think but somehow irrelevant to whatever scene it was involving my friend.

He was very melancholy, sighing occasionally, now and then resting his chin on his cupped hands, his elbows on the table in front of him; or leaning back in his chair, extending his arms and laying his hands palms down on the tablecloth, not quite reaching and certainly not touching the chest which remained the focal point of the tableau.

I’ll never know what the chest contained. Whatever it was it was clearly significant, the only thing that mattered to my friend, or had mattered for months past. It had nothing to do with the interests I’d come to associate with him, with literature or history or landscape or the arts. It was something of intense personal meaning, and we had never discussed such things. Perhaps they were incapable, whatever they were, of being put into words: but they were clearly of great importance to him: perhaps the more so by virtue of their never having been discussed.

At some point recently whatever they were had become intrusive. It was as if they’d been dormant, inactive, immaterial to one’s daily life and the pursuit of one’s interests; matters of only limited interest. But within them lay some mechanism which, once set in motion, would evolve with slow but inexorable force, involving my friend’s entire person in a process quite apart from his own normal life and activity, involving him in what I can only call a narrative, a relationshi, approaching a psychological theatrical plot. I had no idea what lay at the bottom of this turn of events, but clearly something in that chest was key to its force; his eyes were by now burning with a sullen, resentful kind of intensity as they stared at it, locked on it, you might say, as if something within it were similarly fixed on him.

I could see him growing desperate, potentially violent, and it became a matter of the greatest importance to convince him that I myself had nothing to do with whatever had so seized him. In only a minute or two, in fact, the situation was so intense that I cried out, quite involuntarily, subconsciously hoping I suppose to break the spell, to interrupt this terrible hold that chest, or whatever it contained, had on my friend; I could see he was about to something terrible, something irreversible, perhaps some terrible violence on me, for I saw no other person or thing, other than the chest, that might be the object of this passion.

I saw that my exclamation had no effect on him, however. But then I quickly saw that I myself had no interest for him at all; I might have been quite invisible. His attention had lifted above and beyond the chest; he was staring into the space beyond the table, between it and the doorway through which I had stepped only minutes before. There was no one there, at least not visibly: but I felt a presence there, perhaps only because his fixed and intense gaze suggested someone. And he was about to destroy that person, and I cried out again; and then the entire scene dissolved, and I slept quite peacefully.