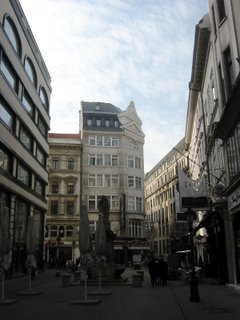 other photos of Budapest streets here

After two more days I still don’t have a feel for the city. It is not a western European city, I think, though I hardly know German cities at all; it certainly feels quite unlike a Spanish or French or Italian city. There’s a fine variety of goods on sale — Italian clothes, hand-made luxury albums and journals, many bookstores and music stores, quite a number of shops selling cameras, laptops, and the like.

It’s a pleasure to walk into a music store and find shelves of miniature orchestra scores — something that hasn’t existed in San Francisco or Berkeley for many years, to my knowledge. But most of the scores are to standard repertory compositions, and the prices are as high here as anywhere. When I recall that fifty years ago I could buy a score of a piece by Enesco, for example, in a shop on Hollywood Boulevard, for three dollars... But let’s not go there.

We’ve been to two concerts so far. The first, two days ago, was very interesting: a small string orchestra playing a very early suite by Janacek, the Martinu harpsichord concerto, a strange flute concerto by Pavoi Simai (a contemporary Slovakian composer), and Dvorak’s A-major sextet arranged for string orchestra. I’m not sure what the ensemble is called — as noted previously, my Hungarian is totally nonexistent. But Gabor Takacs-Nagy was the conductor, and a pert, active, engaging fellow he is, especially seen from only a couple of yards away.

We were in a studio at the Hungarian Radio, an amazing studio with honey-colored walls and ceilings made of bent and angled panels perforated in many patterns and decorated by a scrap-metal Socialist Realist Abstract (yes, there is such a thing) mural over the on-the-air lights and control-panel windows. There were perhaps a couple hundred in the audience, in seven or eight long rows of seats, and the music was bright and lively.

It contrasted greatly with last night’s “Repríz koncert” at the Museum of Commerce and Catering. Here we heard six pieces for varying combinations of synthesizer (a Yamaha SY77), trumpet, flute, and cello, with some live electronic processing — mostly tape-loop pulse effects. The music was surprisingly old hat; there was nothing you wouldn’t have heard forty years ago in San Francisco — but maybe that’s what the “reprise” signified: a look back at early postwar modernism. The composers and performers seemed very serious yet somehow disengaged; they went about their work like professionals, but also tradesmen. Someone introduced each piece to the small audience, who looked like relatives and colleagues, but of course we understood nothing.

MUSEUMS: two so far, one exceedingly absorbing, one quite disappointing. The Hungarian National Museum turned out to be a survey of Hungarian history, from about the Roman times until the fall of the Berlin Wall. There was a sufficient number of English-language summaries on the wall panels to keep us oriented, and room after room of paintings, armor, weaponry, maps, china, jewelry and the like, together with a few installations of period rooms.

We were astounded at the number of vellum manuscripts on view, many with elaborate initials or miniatures, fading away under the light. It was a pleasure to be able to read passages, where my Latin rose to near comprehension, in beautifully written letters and deeds dating back across the centuries; and it was fascinating to watch the ebb and flow of the Hungarian national confines from post-Roman times to the present.

Alas we were spent long before the collection ran out, so gave less attention that we should have to the twentieth-century rooms. Here, though, even a quick survey reveals the reason for the Hungarian joylessness reported here yesterday. Hungary was a proud country and a rich one for centuries, but the Austrian empire, the horrible wars of the 20th century, and the communist administration took a lot of the joy out. We left the museum a bit dispirited.

The promising-sounding Museum of Commerce and Catering boasts a fine collection of historical items pertaining to the trades and industries and particularly those of the restaurant business, and we looked forward to seeing it. A chance conversation with a tourist-office clerk, though, revealed that it had recently moved to new quarters just across the street from the Basilica, and when we went there we found only a few advertising posters on exhibit; the permanent collection is not yet re-installed.

Much remains, of course, and we’re out now to get tickets to opera and ballet, to see art and history, and no doubt to eat. I see I haven’t reported on that yet. Tomorrow.
Posted by Charles Shere at 1:09 AM