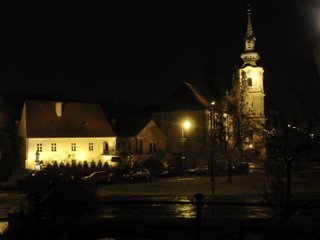 ST. MARTIN’S DAY is the day you eat goose, at least here in Budapest; so it was a lucky thing that we had postponed until today a visit to my cousin Roxanne’s favorite Budapest restaurant, Aranyszarvas, just across the “Elizabeth Bridge.” She had described it as just across the bridge and a little north, maybe on Atilla Út; and the fold-out guidebook I bought a few days ago happened to list it too, a little more specifically as at Szarvas tér 1. The tourist-office lady helpfully told us how to get there from our hotel, on the black bus number 7, do not take the red bus number 7, it will not help you; and get out just after the bridge, and then walk.

And so, in general, we did, and it all worked out. The Elizabeth Bridge is in fact a high-speed road bridge; it ends in swooping ramps not at all conducive to pedestrians; and there’s virtually nothing — if fact, literally nothing — by way of signs helping pedestrians figure out what to do next. But we knew it was upstream from the place we got off the bus, and the book suggested it was near a baroque church, and the Tabán Church was clearly visible and nicely lit, so we headed for it, and there was the restaurant.

We had reserved earlier in the day at the tourist office, and a good thing too: a few parties showed up without reservations, and were sent away with regrets. Last night we ate at a very upscale restaurant further upstream on this Buda side of the Danube, and there was only one other party there by the time we left, quarter to nine. Here at Aranyszarvas there were only a couple of empty tables when we arrived, promptly at eight.

Our guidebook describes it as specializing in game, and the menu confirmed this. The menu mentioned venision cottles, dear, and a number of other things; but we forwent the English-language menu in favor of the daily special — St. Martin’s goose menu. We had

and with this we drank

as an aperitif, Jagermeister, and (for me) a typical Hungarian cocktail involving Tokay
new Hungarian “Beaujolais”
special house-made prune snapps

Everything about this place was memorably pleasing. The rooms: two of them, the furthest the largest, with perhaps seating for forty, one of whom was a middle-aged man who set about playing a synthesizer in rather an unintersting fashion; the other of which — the first as you entered — held only three tables, one of which was ours. The walls were a pleasant pastel green, set about with antlers and such, and the room was broken up with pots of ferns and, as I recall though it seems odd now I think about it, poinsettias.

The staff: friendly but professional and maintaining a professional distance. English-speaking, fluently so, without any dancing about as to what language you’d prefer to speak. Perfectly at ease explaining the special St. Martin’s Day menu, even though it was entirely in Hungarian, and — some of it, anyway — apparently untranslatable.

The aperitifs: Jagermeister for three of us, but I was interested in a special item, a puszta koktél involving, I later learned, dry Tokay, apricot brandy, and a “sweet brandy,” a Hungarian specialty otherwise never explained or described. In it were floating a couple of small ice cubes and a black olive, and it was really quite delicious.

The wine: this may have been a Hungarian version of Beaujolais, but it lacked any component of headache. The wine was crisp, fruity, a little complex, with a good acid balance. I couldn’t identify the grape, but the waiter said it was a green Portuguese. Well, it was red, of course, with a fine tobacco-red color and a bit of oak on the nose, and we drank nearly two bottles of it.

The broth: salty, deep, flavored with minced parsley, deeply colored. The goose neck stuffed with a bread-based stuffing laced with goose-reduction flavor. The goose breast slices as thick as slices of prime rib of beef, but with no fat at all, dark and complex, tender and perfectly sliced across the grain, nothing stringy about it.

The dessert: Lindsey had never met anything like it. It was a square of a sort of cake, but what was it made of? It had a texture recalling fine shreds of coconut, but there was no coconut flavor at all. I myself think it was egg-custard cooked firm, then somehow shredded and re-configured, lidded with an extremely fine layer of crèpe. But I’m no pastry chef.

WE LEFT THE RESTAURANT FULL AND HAPPY and tried to find the place to board our bus back to our hotel. We took the first bus we saw, which was headed the wrong way: but a pretty slender tall young woman who spoke excellent English told us to stay with it, she’d show us where to get out to catch the right bus going back in the other direction. We stayed with her, needless to say. She turned out to be a Budapest native, a student of Sociology and the Contrabass; she’d played that afternoon in a performance of the Mozart Requiem; we traded tunes and jokes about violas and condutors, and she showed us the right bus, and we were easily back to our motel.

Earlier today we went out to the fabled Budapest flea market, which reminded me of the Paris flea market in the old days — porcelain, glass, old furniture, salvaged army mementos, amateur paintings, old clothes, bricabrac, more violins than you could shake a stick at, a few steel-engravings and ceramic busts of composers (chiefly Beethoven), auto-repair tools, watches, coffeepots, mortars and pestles, fake leather jackets, hats and helmets, swords, corkscrews, eyeglasses, and (as Burl Ives used to sing) things too fierce to mention.

I’ll write later, if I feel like it, about the bus ride out there, the suburbs, the shopping plazas, the paranoid changed bus schedules, the old ladies and young lovers, the shoppers coming back from Auchan with plastic bags of sausage and onions.

We also went today, surpise, to another concert: the Buda county orchestra playing the overture to Don Giovanni, the d minor piano concerto, and the “Prague” Symphony — an entire Mozart program in D, minor and major. Who could resist such a program? The main Budapest concert hall, on Ferenc Liszt Square, is a fine building from the turn of the 19th century, roughly a short shoebox seating about 1200, with splendid acoustics. The concert was sold out, so we bought standing tickets which allowed us to take unsold seats in the first row. We sat in front of the cellos, and didn’t see violins until after intermission, when the piano was rolled away. Nevertheless the sound was splendid. The orchestra was perhaps not fully professional, and there were missteps: but what a pleasure to hear this key so splendidly explored, and the “pa-pa-pa-pa-pa-pa-ge-no” theme so nicely varied, and Mozart so entitledly sure of himself, and making such fine friends and productive allies of every instrument in the orchestra.
Posted by Charles Shere at 3:18 PM