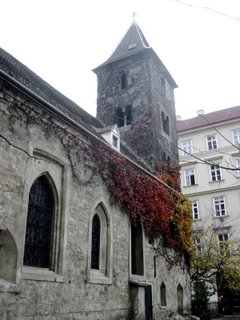 
TRUMPETS AND DRUMS in the bright, certain, open key of C major; violins and organ scrubbing away at their passagework; cello, bass and bassoon anchoring it all with their darker bass — that was Mozart’s business Sunday morning, in the Gothic-striving-for-Baroque Stephansdom.

I’d found seats up front, behind the conductor, but Lindsey and Hans and Anneke hadn’t followed quickly enough and were elsewhere in the crowd. A pillar stood between me and the priest, so I saw nothing of the service — there was probably Meaning there: I’m a terribly lapsed Christian, to the point of not being one at all, not even a monotheist.

I am a Mozartian, though. It was his K. 258, the “Piccolomini Mass,” intercut with a C Major “Church Sonata” and, of course, the sections of the liturgy supplied by the priest in a pleasant, focussed chanted German, with responses from the parishioners. For God, perhaps four hundred of them, standing and sitting, kneeling, crossing themselves, singing in response. For me, six violins, a viola, a cello and a bass, the bassoon and trumpets, the organ, and twenty-five fine singers, young for the most part, four of them singing solo at Mozart’s suggestion.

Next to me was a couple from the mountains, out somewhere near the Swiss border, a retired electrician and his wife, in their late seventies I’d say, in town to visit grandchildren and hear some music — and attend Mass, for they were clearly devout. And then we shook hands all round, I with the young woman next me on the other side, and those seated in front of me, and the older couples sitting behind; and we settled back for another homily by the unseen speaker — this one repeated, once I’d finally got a hint of what his German was trying to tell me, in much more understandable Italian; and then finally confirmed, as if for me alone, in English. And then it was over.

We’d been to church once before in the last few days, to a Friday night service in the Romanesque St. Rupert’s Church, the oldest in Vienna; it stands on a bluff overlooking the Danube (canal) in its own Platz, like all churches here; with a leap of imagination you can mentally erase all the buildings around it, fill in the missing slope below, and imagine the little settlement Vienna was twelve hundred years ago.

We’d been attracted by a meeting of the local St. Egidio cell. Egidio has interested us since we lived for a month in an apartment near his church in Rome, in Trastevere, and learned of the society that developed there in the break-through days of 1968, when John Paul was thawing Catholicism as others were to thaw Communism twenty years later, and when local youth and students determined to do something for the poor and the homeless who were beginning to be all too apparent, in Rome and Europe as in our own country.

The Vienna group was small Friday night, and their service was simple. A very pretty young woman welcomed us, in fluent English, and we sat forward in the small stone church on a wooden bench; perhaps a dozen others were in attendance; we sang our way through a few hymns and listened to a short lesson in German (and so incomprehensible to me; the young woman (who’d been playing “organ” on a small synthesizer with decent sound) said the Lord’s Prayer in German, then English; and we shook hands all round and went out into the night.

The St. Egidio meeting had the feeling, to me — and of course I am very much an outsider — of a small private group associated with groups in other places; and for that reason made me think of what Christianity must have felt like two thousand years ago. Or, for that matter, Mithradism, or any of a number of other religious movements. “Religion is the serious and social attitude toward that which is considered as determining one’s fate,” ran the definition in the textbook required in my first college class, a history of religion — I was sent to a Christian college for my first year — and that’s always seemed to work for me; it’s just that what I consider to determine my “fate,” to use a word that already loads the discussion, is a matter of genes and DNA, of the laws of physics, and of the grace of Life.


I THINK THAT MAY BE something of Mozart’s attitude, too, by the time he reached his late years. Sunday night we heard The Marriage of Figaro, sung in German at the Volksoper — a fine production with excellent singers, orchestra and conductor, none of whose names are at hand. This opera sounds odd to me in German, and there were no supertitles to remind us of the intricacies of this wonderfully humanist opera; but of course we’ve seen it so many times, the jokes are so familiar, and above all Mozart’s music is so clear in its depictions of not only emotiion but also repartée, that the chief disadvantage lay in what the sound of German does to the melodic line — especially the fast, busy, contrapuntal lines. Quick patter-songs in German have a humorous effect not intended, I think, by Mozart and da Ponte in the original Italian.

It’s Mozart Year here in Vienna. Scattered around town are red pylons with messages in German and English stating the relevance of their particular position to Mozart’s life in Vienna: his first public concert here, his residence there, and so on. There must be forty of these signposts, and they each have a telephone number on them. I called one of these numbers, and got a three-minute mini-lecture, in English, with eine kleine backgroundmusik; a pleasant way of getting a guided tour of Mozart’s Vienna.

But it is not only Mozart going on. At the Albertina yesterday we saw an amazing exhibition of late Picasso paintings and prints, room after room of them, beautifully installed in these intelligent, open, serene galleries. I remember the fashion for disparaging these paintings when they were new, in the 1960s; and I agree with the introductory panels in this installation (helpfully in both English and German) that Picasso was, once again, prescient, foreseeing the mood of the New Expressionism that would come in twenty years.

He was also really old, approaching ninety; and he was in contradictory moods — resentful of his aging body, aware of limited time, intent on producing work, still delighting in invention and discovery, and — but now I’m speculating — increasingly detached from earthly activity.

What does this mean? Basically, I think, the increasing awareness that it’s not one’s personal life that’s important, but the ongoing Life one’s own has been a part of. Picasso and Mozart have much in common, most of all their awareness and enjoyment and passionate, entertaining, pointed depiction of The Human Condition. The Marriage of Figaro has much in common with Picasso’s late depictions of models and artists, models and matadors, models and musketeers. Sex is life and life is sex, according to the laws of Nature: to the old and aging — even at thirty-five, Mozart’s age at death, Mozart attained these qualities! — both have become more comedy than serious business.

This is behind the absurdity of Count Almaviva’s lust for Susanna — and, because of its absurdity, its injustice: so much of the revolutionary quality of this opera, and of Beaumarchais’s pre-French-revolutionary plays, depends on a reading of the changed meaning of sexual activity in a society that has evolved past the primitive.

But the detached view of the busywork of life, of what James called somewhere the species’s great will to continue (he wouldn’t have used so blunt a word as “sex”), also facilitates the fond approval of Cherubino’s and Barbarina’s amorous play, which reminded me of the pretty young couple biting one another’s lips in the queue the other day at the supermaket. And, of course, the anticipatory flirting-and-bickering of Susanna and Figaro. And, for that matter, of the fondness, the affection, still clearly present between Marcellina and Basilio.

Picasso and Mozart are both clearly conflicted about being on the threshhold of retiring altogether from this busywork. Each was clearly aware of his mastery of his art, and of the essentially endless amount of work that remains always to be done, of further mastery to achieve. I think Shakespeare, Mozart, and Picasso pretty well sum up their metiers; in their respective forms of expression each is the outstanding modern reporter on the human condition.


AND WHAT ABOUT Toni Morrison? She’s here in Vienna participating in Peter Sellars’s New Crowned Hope festival, an exploration of this new century’s possibility of continuing to explore the themes preoccupying Mozart in his final days: the forgiveness and reconciliation of La Clemenza di Tito, the transformative magic of Die Zäuberflöte, and the valediction of the unfinished Requiem.

In conversation with Sellars last night Morrison addressed these themes, pointing out first that she deliberately courts inconclusiveness in her work, as the stories that fascinated her when she was a child avoided neat, told-you-so conclusions. More profound, to me, was her description of a four-stage process she hoped to work through in her writing — and which she apparently sees (and I would say with accurate insight) as describing the process of art: to move from Data, the raw stuff assaulting our perceptions every day; to Information, which is some kind of organization of such data; to Knowledge, which is the understanding (and, presumably, usefulness) of such information; to — “hopefully,” I’m afraid she said — Wisdom.

This is clearly the process of the three works Sellars chose as his jumping-off point; and of the three great Mozart-da Ponte opera (and, I’d argue, of all of Mozart’s work). It’s also, I think, the process Picasso was engaged with at the end of his long life.

And it may be the process the Western World is engaged with. Sellars’s festival seeks to bring the data of art from neglected worlds to Vienna, convinced that there is by now sufficient organization, in this postmodern world, to make a resulting contribution to the “developed” world’s knowledge. It remains for our artists, I think, to transform the result, through their magic, into Wisdom — and clearly those he has assembled here are capable of this, if we only pay attention.
Posted by Charles Shere at 12:00 AM