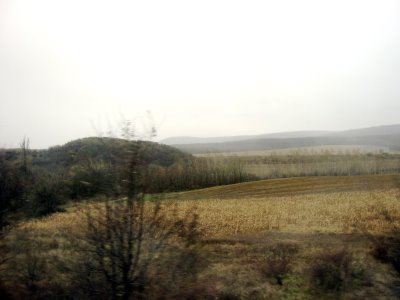 THE TRAIN OUT OF BUDAPEST, like any train leaving any metropolis, goes past railroad yards, playing fields, factories, governmental centers, lower-priced housing. Budapest, I’m told (but have not confirmed), is a city of two million; the entire country has a population of ten million, so the countryside must be pretty empty. One person in five lives in the capital.

Our taxi driver said the country is buying 30,000 new cars a year, which seems a lot. We’ve been staying in the center of the city, barring one excursion to the Ecseri flea market, so we haven’t seen the traffic jams; but they must surely exist; certainly the taxi driver mentioned them. But central Budapest is well furnished with public transportation; and as I’ve mentioned earlier it’s completely free for those over sixty (if they are citizens of European Union countries). There are three subway lines, trams, buses, and trolleybuses tracing a bewildering spiderweb of routes on the giveaway tourist maps.

We shared our second-class train compartment with a young woman who could speak English but in fact said nothing the entire trip. I spent the time taking photos through the closed window and writing a little.

After crossing the Danube on the new bridge to the south of the city, blocks of nicer apartment buildings; offices (IBM, HP); villas. Then the countryside, rolling plains, much in corn and wheat, with low hills in oak woodlands. Sandy terrain at first; later, limestone, and quarries. Low hills once or twice revealing big hollows: caves? Quarries?

Ninety minutes to Györ, Hungary’s second city I suppose. Many new cars on lots. Then fields; in one, eight or ten deer in a herd. WInd-generators. Passport control: first a Hungarian border cop comes to our compartment to inspect and stamp our passports; then, a few minutes later, an Austrian. The last Hungarian town; then Nickelsdorf, looking more prosperous, the buildings newer, the paint fresher, and the fields more varied. Vineyards. Many more wind-generators.

We pulled into Vienna’s Westbahnhof ten or fifteen minutes late; I don’t know why. My Italian cell phone called our new landlady with no trouble at all. Bancomats were where you’d expect to find them, and worked. The taxi driver didn’t know where Passauer Platz was, but pulled a pair of thick spectacles out of the glove compartment and eyed my map closely, then drove right to it — past those huge Baroque monumental buildings that define Vienna, and then as a final flourish past the Stephensdom, and then we pulled up in front of Maria am Gestade and rang the bell at our new apartment.

It’s not bad: two bedrooms, a sitting room, a fully equipped kitchen, a bathroom with tub, all an easy walk from the historical center. We walked out about seven to find a restaurant for dinner, and there one was a block away: a Dalmatian trattoria, Matovia, Farbergasse 8. The host-waiter and possibly owner was a friendly fellow who spoke good English and, surprisingly, a little Dutch — but not Italian, though the kitchen certainly leans in that direction. We had decent mixed salads and then our main dishes, for me lamb chops, cooked just the way I like them, then set atop steaamed eggplant slices. For dessert, four kinds of cheese, drizzled with honey and Balsamic vinegar.

The contrast between Vienna and Budapest couldn’t be stronger. There’s just a lot more activity here, and clearly a lot more money. We’ve had a number of conversations about money, the Euro, the European Union and what it’s done to national economies. Virtually without exception everyone complains that prices have doubled at least since the Euro replaced the guilder, the franc, the lira, the schilling. When I ask where the extra money has gone no one has an answer, unless you call a shrug an answer.

Of course it’s not that bad. Hans says everyone he knows has some index commodity he uses to measure this kind of inflation, and among his friends and associates that index is the cup of coffee. The price of coffee is up, no doubt; but — asks Hans — what about telephones? Television sets? Cars, even? They haven’t doubled, not at all; in some cases prices are even demonstrably lower.

These questions quite elude me; I haven’t any idea how economy or economies work. It seems to me society is becoming much more technological; that the technological society spawns management and administrative jobs; that those jobs in the final analysis contribute next to nothing to the commodity market that everyone says drives the economy — but that we need to employ vast quantities of people, preferably without generating to many more dingettjes as the Dutch say, things.

I was struck by the acres and acres of new cars sitting in lots in Györ, and the numbers of auto-transport railroad cars on the sidings. But then I saw Austria. The auto-transport railroad cars in Austria are designed to carry twice as many cars. They must be pouring into the country, into all these European countries, at an alarming rate. One can only wonder where it will all end.
Posted by Charles Shere at 1:54 PM